“That’s the South’s trouble. Ignorant. Doesn’t know anything. Doesn’t even know what’s happening outside in the world! Shut itself up with its trouble and its ignorance until the two together have gnawed the sense out of it.” – Lillian Smith, Strange Fruit 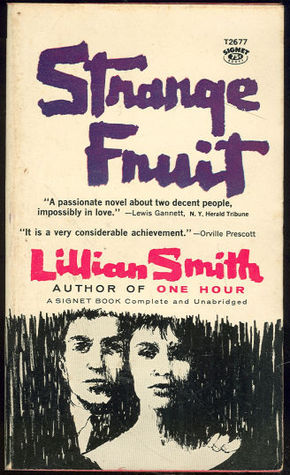 Books come to us in all sorts of ways. Some come assigned; some come recommended; some come by accident. Strange Fruit, Lillian Smith’s powerful indictment of the Jim Crow South, came to me in that third way. I was browsing the “sell off” books at my local library when I came across this powerful novel and decided to buy it based solely on the title – which may or may not have come from the Billie Holiday classic about lynching. Once I had decided to divide my reading year into world lit/Southern lit groups, Strange Fruit became a natural choice for the latter group. Following as it does Peter Taylor’s brittle, elegant A Summons to Memphis and Harry Crews’s over the top Southern Gothic nightmare A Feast of Snakes, Strange Fruit is a book that synthesizes both of those views of the South – though it was written 40 years before the former and 30 years before the latter works.

This is a book with a remarkable history. Vilified as obscene, there were numerous attempts to ban the book. The controversy made the book a best seller, in fact the best selling novel of 1944. No less a personage than Eleanor Roosevelt became a champion of the book. Perhaps, as has often been noted, the greatest outrage over the book came when it became known that the author was a Southerner – and a white woman. A generation later, of course, a Southern white woman would become a national heroine – eventually a national treasure – by writing much the same story – only in a more saccharine treatment.

Strange Fruit takes place just after World War I in a south Georgia town named Maxwell. The plot of the novel is simple – but utterly engrossing. A young man of the “better classes” of Maxwell, Tracy Deen, is in love with a young woman of the “lower classes,” Nonnie Anderson. They met as children when Tracy rescued Nonnie from the clutches of a boy bent on ill treatment, and, after Tracy has been away at college and served in the war, he and Nonnie become lovers when he returns to Maxwell. He knows his family and friends would not approve; she knows the same about her family and friends. Still, they find it impossible to stay apart – at least until Tracy gets religion, sees the error of his ways, and becomes engaged to an “acceptable” girl. However, by this time Nonnie is pregnant, so he offers her money to sustain her (which she refuses). At the time of this last meeting between the two lovers, Nonnie’s brother Ed overhears their conversation. Later that evening, he shoots and kills Tracy in a self-righteous fit of anger. Eventually the anger of the community over the murder of a prominent citizen leads to the mistaken killing of the Deens’s house worker, Tracy’s lifelong friend, who is wrongly accused of the murder. The remorse felt by leading citizens over the injustice committed is poignant and their resolve to be better people seems genuine.

This is the stuff of good tragedy – or, at the least, good melodrama. What makes Strange Fruit so powerful, and what made it inflammatory in its time, sadly relevant to our own time, can be traced to the cultural issues it explores through its examination of the characters within their setting. Tracy Deen is a white man and Nonnie Anderson is a black woman. They live in south Georgia in the early 1920’s.

It is not taboo in this cultural setting for a white man to have a sexual relationship with a black woman. What is taboo is for him to love her as Tracy loves Nonnie. It causes them both what is ultimately unbearable unhappiness: Tracy loses his life and Nonnie loses her brother (Ed flees north to escape the vigilante justice of the Ku Klux Klan). The community shows its ignorance and racism in murdering the Deen’s house servant, Tracy’s life long friend, because – well, because he is black. One of the novel’s more enlightened characters describes it this way as he recounts the lynching and murder of Henry, the Deen house servant and friend to their son:

Thing that got me the most…was the hate on folks’ faces. Even on the women’s. It wasn’t Henry they were hating – or any Negro. It was – I don’t know…. The doctors [call] it paranoia…it doesn’t seem to me white folks are very different…

One other fascinating element of the cultural setting is that at the time all these events take place Maxwell is in the midst of its yearly revival meetings. In fact, it is the revival leader, evangelist Brother Dunwoodie, who convinces Tracy Deen to give up his “sin” and reject the woman he loves in favor of maintaining the race and class divisions (and their attendant oppression), an act which leads, ultimately, to his murder. Religion, then, is indicted as a co-conspirator in the murder of two men and the exile of another, as the same character quoted above notes to his father:

Trouble is you can’t be a Christian in the South. You can’t be one even if you want to, in the setup we’ve got down here! Everybody gouging his living out of somebody beneath him – singing hymns as he gouges –

In this bleak cultural milieu one can understand how a dreamer like Tracy Deen is attracted to a dreamer like Nonnie Anderson when she says things like this:

Race is something – made up, to me. Not real. I don’t – have to believe in it. Social position – ambition – seem made up, too. Games for folks to – forget their troubles with.

Tracy Deen knows that she talks madness, but what is love but divine madness, as Deen himself observes:

You didn’t give a goddam what the world thought. She was yours, that’s all! She’s my girl. She’s lovely and beautiful, and she’s mine. He’d laughed and pulled her to him again. Holding her there, he knew he loved her – as a man loves the woman who fits all his needs.

That Tracy Deen and Nonnie Anderson are star-crossed lovers is less important, then, than why they are star-crossed. The horror of what happens in Strange Fruit is encapsulated in the observation of Miss Sadie, Maxwell’s telephone operator, a character who serves as something of a Greek chorus to the story:

What was it in folks that made them cruel? What did it satisfy in them? Must be something in a person that needed to hate – to make him want to hurt somebody weaker than himself –

Strange Fruit has enjoyed something of a revival in the last few years. Here’s hoping that its revival does more good than the revival described in the novel itself. And that this vision of the South – an honest, brutal, deeply troubling vision – sparks some of the same sort of soul searching that that other book has been so touted for having done.