In Ellen Foster Kaye Gibbons offers a flawed if compelling coming-of-age tale with a narrator who is by turns a believable rural North Carolina 11 year old and – on occasion an author remembering her 14 year old self upon whom her character is based. 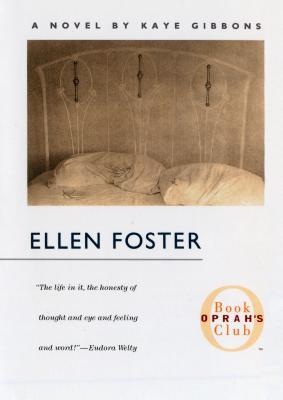 A book like Ellen Foster can be described in multiple ways which all mean the same thing: semi-autobiographical, coming-of-age, bildungsroman. This, Kaye Gibbons first novel, published during the wave of “women’s fiction” promulgated by the publishing industry in the 1980’s (others in this wave included Lee Smith, about whose work I’ll write later this year, and Ellen Gilchrist, about whom I won’t) is a quirky little book and has a great deal of charm. It certainly deserves much of the praise it has received. The story, told by the remarkably matter-of-fact narrator, “Ellen Foster,” (the first name is real; the last Ellen’s own construct based on her experiences), is a model of economy, covering as it does the deaths of Ellen’s mother, father, and maternal grandmother, as well as Ellen’s time living with first her parents, then one of her teachers, then her grandmother, then an aunt.

There are two matters to discuss about Ellen Foster. The first is the remarkable quality of the narration. It is really quite good: engaging, touching, occasionally laugh out loud funny. The second is the content of this story. How much is novel, how much is memoir? That question is the more intriguing, as it raises interesting questions about the wall between fiction and nonfiction.

As I mentioned above,the novel’s narration is an impressive achievement. Ellen is by turns hard-minded, comedic, and, though only rarely, self-pitying. She is an 11 year old girl who is treated like shit by life and who bucks up and does what she can to survive the shit storm. Ellen is as practical a female as, say, Moll Flanders, and she’s not above a wee bit of larceny, too, to help herself survive (she steals money from her father to pay for items like lights and heat).  After her mother’s death (suicide by pills), Ellen’s father alternates between disappearing for days on alcoholic binges and attempting sexual abuse on his tough,canny daughter (Ellen is so matter-of-fact that one might not notice that he is successful at least once or twice before Ellen is able to figure out a strategy for evading him). When he dies, Ellen has already been taken in by a kind art teacher and her husband who give her a stable, happy home briefly before she is taken from them and given to her mother’s mother (“mama’s mama” Ellen calls her) who abuses her for existing as proof that her beloved daughter was ever married to her alcoholic father. Ellen casually informs us that she and her grandmother do not attend her father’s funeral. Ellen is then forced to nurse her grandmother through her final illness with no help from her aunts, both of whom seem primarily focused on getting the old lady’s money. One of the aunts does take Ellen in briefly before a run-on on Christmas Day leads her to throw Ellen out (shades of Dickens, that) and Ellen finds true happiness and stability finally with her foster family (and now you know where that last name comes from).

As I have said, this is all told in matter-of-fact fashion by one of the toughest, most scarred kids in fiction. I’ve seen Ellen compared to Scout Finch, but more a accurate comparison might be Holden Caulfield. Ellen, like Holden, is damaged goods and it takes restraint on the part of the reader to avoid being taken in too much by Ellen’s deadpan delivery, as here when she describes her troubled relationships with her father, grandmother, and aunts:

So many folks thinking and wanting you to be somebody else will confuse you if you are not very careful. It gives me nerves to worry about me.

At one point her father shows up drunk at her school attempting to take Ellen away from the teacher who has taken her in. As her father stands outside the school screaming for her and disrupting her class, Ellen offers this chilling observation about how to manage him:

I told the teacher I could make him stop. Just give me a pistol and then go out and scoop him up.

When her father dies shortly after of alcohol related causes, Ellen again chills the reader with her insight:

But he was somebody I knew who was dead. I felt the way you feel when they say a star or a old president is dead and you feel sorry for a flash when you remember his face and think about how you could go quick as a wink.

These observations might seem to suggest lack of affect, but in truth they are almost the complete opposite. Ellen is full of affect – affect that she deadens in order to survive the brutal treatment she receives at the hands of those who should love and protect her.As she explains to the embittered harpy who is her grandmother:

All the people who said things about me were wrong, I told her…. I decided to spend the rest of my life making up for it whatever it was…. One day… if I ever sorted the good from the bad and the memories of what I wish were true.

If that last quote seems rather precocious, it is, and I think it points to the flaw in this otherwise impressive work. Ellen Foster is based at least in part on the author’s own unhappy childhood, particularly on a set of similar circumstance that affected her life when she was 14. And at times Ellen the narrator seems to owe more to Kaye Gibbons the writer’s memoirs than to her imagination. One of the most difficult feats for any writer is to take personal experience, put it through the blender of the imagination, and bringing forth characters and events that are well blended amalgams of personal experience of oneself and others. Once in a while we get that older voice, the voice of a 14 year old filled with teen-aged bitterness and angst, as here when Ellen describes why she paints a picture (Ellen’s artistic talent is part of why the art teacher took her in) of cats for her aunt and cousin’s Christmas present rather than something with more depth:

I would really like to paint them one of my brooding oceans but they would miss the point I am sure of how the ocean looks strong and beautiful and sad at the same time and that is really something if you think about it. They would not like the picture because it looks so evil when you first look at it. It is not something that would grow on them. Not like these cats hopping around teasing with a ball of yarn. I like that picture fine except that once you look at it one time you have seen and felt everything you will ever see and feel about those cats.

It’s a lovely, insightful passage, to be sure – but it seems more the insight of a teenager, not of an 11 year old, even one as sadly worldly wise as Ellen has been forced to be.

Much has been made by reviewers of the opening lines of Ellen Foster where the narrator is describing how she thought up plans to kill her father. The truth is, the ending of this little novel is probably more powerful. Ellen’s steadfast friend throughout the book is Starletta, the daughter of a black family who work on a farm near her parents’ home. In one of those lovely insights that come to us all sooner or later, in Ellen’s case sooner, she realizes near the end of the book that for all her troubles she’s had an easier life than her friend – for the simple reason that she’s white:

It’s a fine ending to a slightly flawed, but very fine, novel.