Mama and Them do Christmas… 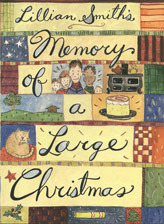 One last review for 2013: a classic example of a sub-genre of Southern literature known as “Mama and them” stories. Many of these belong in the memoir category, while others follow the autobiographical or family history novel path. The quality is uneven, as with any successful sub-genre; some of the books such as the Robert Morgan work (my review linked above) are outstanding; others, not so much (I’ll name no names – well, maybe one).

Lillian Smith’s Memory of a Large Christmas falls squarely into this category. This brief memoir of the author’s south Georgia upbringing and her large family’s (nine children, two cousins, both parents and numerous others) Christmas celebrations in the years preceding World War I. There are interesting segments on hog killing, unusual present buying ideas, and lovingly offered details on food preparation and the construction of the house Smith’s family lived in.

It’s a popular and well liked book (Goodreads raters have it at about four stars), and it has much charm and winsomeness.

However, as a piece of writing it has some glaring holes.

First, there is no focus on a specific “large Christmas.” The author tells anecdotes about several Christmases, some full of family cheer and abundance, some marked by compassion for others. These anecdotes are charming, but the work feels unfocused.

Second, for all the loving detail given certain small segments (the behavior of the various children during hog killing time, for example), major plot shifts (such as the collapse of the father’s financial fortunes during World War I and the family’s – at least the parents’ and younger children’s – move to a small house in the mountains of north Georgia (one assumes – geographical markers are not offered) are treated with in a few sentences when the reader yearns for much more fulsome explanation.

One feels as if this were one of the author’s attempts at a full length book – perhaps her closest approach to a coherent piece on her interesting family and a well loved and remembered childhood. As a Christmas story, Memory of a Large Christmas falls short of a classic Southern “memory piece” such as Truman Capote’s “A Christmas Memory”; as a tale of remarkable parents, one wants it expanded, much as Harper Lee’s To Kill a Mockingbird began as one piece and by combination, organization, and accretion resolved itself into a masterpiece. The second story in this volume, “Christmas Kitchen Fifty Years Ago,” for example, with its charming recipes (or “receipts” as Smith calls them using the terminology of her youth) could easily have been woven into the previous work to both enrich its detail and give more focus.

So, while Memory of a Large Christmas offers fascinating snippets of a Southern family’s history, ultimately one must wish that Smith had been able to expand it into a longer, more satisfying memoir of what was clearly a wonderful and intriguing set of lives.

2 Responses to Mama and Them do Christmas…