Harry Crews’s A Feast of Snakes: As Dirty as Realism Gets…

When a writer combines washed up All-American football players, sexually frustrated former majorettes, a rattlesnake roundup,  a racist, rapist sheriff, and dog fighting and sets it all in the rural South, one expects pretty much what Harry Crews gives us – a darkly tragicomic tale that delights even as it gives one the willies. 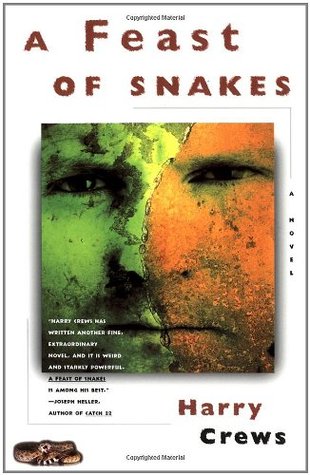 A Feast of Snakes by Harry Crews (image courtesy Goodreads)

Another entry from the 2015 reading list’s Southern section is the subject of this essay. Like Richard Ford, about whom I have written, Harry Crews is another practitioner, whether he’d admit to it or not, of the literary style called dirty realism. He certainly provides a powerful example of SouthernGothic entertainment, too, as A Feast of Snakes, his eight novel, shows.

And perhaps that’s an important point to make about this novel. What makes A Feast of Snakes a powerful read is that for both those who like their Southern lit on the Gothic side, there’s plenty of the grotesque, eccentric, and sinister. For those who, like me, appreciate the economy of style and and cold-blooded examination of those in the lower ranks of the 99%, Harry Crews offers a novel that both delivers plenty of weirdness and plenty of honest examination of the wretched. From snake handling preachers to body building lawyers, this is a book with a little something for everyone.

A Feast of Snakes is the story of a former high school All-American football player named Joe Lon Mackey who, because of his illiteracy (whether this illiteracy comes from learning disabilities or from Joe Lon’s distaste for education is a point readers can ponder), has been left behind by his high school girlfriend, former majorette Berenice, who has moved on to the University of Georgia, study abroad, and a boyfriend who is a member of UGA’s debate team. Joe Lon has kept himself occupied by impregnating, then marrying one of Berenice’s high school pals, the once lovely Elfie whose looks have been marred by having two children in two years. Joe Lon’s best frenemy is Willard Miller, current star of the Mystic, Georgia, high school football team (and Joe Lon’s equal as a disturbed redneck). Willard’s girlfriend is Candy, known best as Hard Candy, Berenice’s younger sister – and her equal both as a majorette and as wild child. Rounding out the cast of characters is Buddy Matlow, another former Mystic, Georgia, football star who went on to All American success at Georgia Tech but whose NFL career was ruined by a knee injury and whose life was ruined by a pungy stick in the Vietnamese jungle which led to his leg being amputated. He serves as LeBeau County’s sheriff and uses his office primarily to sexually assault females both white and black.

Joe Lon makes his living selling (illegally) bad beer and worse liquor to the folks in LeBeau County for his father, Big Joe Mackey. Big Joe is also a major player in pit bull fighting (and the gambling appertaining thereto), so readers gather a pretty good sense of the stellar character of the Mackey family. Sheriff Buddy, as noted above, performs his law enforcement duties – selectively, shall we say – and, of course, allows Big Joe and Joe Lon to conduct business as usual. Joe Lon, unhappy with how his life has turned out, occasionally beats his wife Elfie for no longer being as pretty as she was (though he is vaguely tormented by the thought that he may have something to do with her decline from dewy freshness).

The town of Mystic’s one claim to fame is its annual rattlesnake roundup. It is this event that brings all sorts of matters to crisis. Berenice returns home for the roundup and ends up in bed with Joe Lon, betraying both her BFF Elfie and her boyfriend the debater. A couple up from Gainesville – the body builder attorney mentioned above, one Duffy Deeter, and his girlfriend, a former majorette doing graduate work at the University of Florida, Susan Gender – meet Joe Lon and Willard and Hard Candy and Elfie and Berenice and establish a bond that leads to nights of partying and debauchery and eventually chaos and destruction. Sheriff Buddy, who has used his pet rattlesnake to terrify a young black woman into allowing him to assault her, ends up on the receiving end of a spur of the moment penectomy performed by that same young woman that causes his death from complications of the procedure. Big Joe’s prize pit bull Tuffy loses his last, most important fight, and is kicked to death by his master. And Joe Lon, his world collapsing around him, opens fire on the snake hunters on the first day of the roundup, killing Berenice, the snake handling preacher, and a couple of others before the crowd tosses him into the snake pen and he is bitten to death by Eastern Diamondbacks.

You didn’t expect a happy ending to this story, did you?

The fascinating thing about A Feast of Snakes is that despite these horrors the story is compelling. Cleanly written, fast moving, brutally honest, the book examines both the causes of psychological dysfunction of characters (Sheriff Matlow’s sense of being unmanned which causes him to rape; Joe Lon’s sister Beatrix’s madness caused by finding her mother’s suicide – committed to escape the brutal Big Joe; Joe Lon himself, tormented by his failure and his stupidity) and the results of their actions upon them and those near them. This is one of those books that test one’s ability to disengage from the narrative. One is pulled in from the first page and must take the entire shocking, disturbing journey with Joe Lon Mackey and his friends.

It is not beautiful writing, but it is powerful, undeniable writing. Harry Crews may not dazzle, but the reader knows he tells a story that, ugly as it is, is absolute truth.

10 Responses to Harry Crews’s A Feast of Snakes: As Dirty as Realism Gets…