Dave Davies’ Kink: Rock Star Same as He Ever Was…

“There is part of that little boy that has remained with me…. He’s always there to remind me of the endless possibilities that exist in the world, all that life has to offer….” – Dave Davies 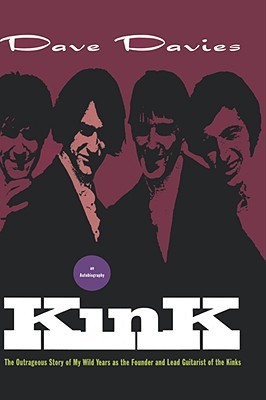 I bought Dave Davies’ “autobiography,” (it’s really a highly discursive memoir with plenty of digressions) Kink about a year ago at my favorite used book store. I’d just read a couple of rock books, including a lovely memoir about meeting John and Yoko at the height of their “bed-in for peace” period and earlier I’d waded through a typical “rock bio” book about the Rolling Stones: you know the type, lots of pictures, very little reported that a serious fan wouldn’t already know – or know more about than the author.

Prior to taking up this yearly quest to write essays about all the books I read in a particular year (and, in the process, getting myself lots of recommendations from friends and pleas from fellow writers for book inclusions), I’d read a number of rock biographies and autobiographies, including biographies of The Beatles, Elvis, and Bob Dylan and the recent autobiographies of Eric Clapton and Keith Richards. In the queue for this year I have Dylan’s memoir, Pattie Boyd’s book about her marriages to George Harrison and Eric Clapton, and Pete Townshend’s autobiography.

I dig rock and roll music, as the song says….

There are two matters to take up in writing about Dave Davies’ look back at his time as the lead guitarist (and creator of one of rock’s most memorable sonic  experiences, that overloaded guitar riff that kicks off “You Really Got Me”) for one of one of  the bands who stand head and shoulders above all others as the giants of the British Invasion – The Kinks.  The first matter is the story Davies tells about himself and his life as a rock star. The second is about criticism, just and unjust, Davies has received for his honesty and openness in telling that story.

Kink is a rock star’s story, full of stories about writing songs, making records, touring the world, dealing with managers and promoters, complaining about unfair/crooked treatment by managers/record execs/accountants. The first three, as you’d guess, give him great joy; the other three are the corresponding pain that accompanies the joy of having your art bring you wealth, fame, and appreciation. Like any good rock star, Davies rails about music publishers who steal ownership of music from naive musicians (amazing factoid: Dave Davies was seventeen – 17 – when “You Really Got Me” exploded into rock history, his brother Ray only three years older), poor management decisions by people trusted to act in the best interest of their clients, and poor money management (with theft implied, if not overtly charged) by accountants.

This makes Kink sound like a long, perhaps slightly dry, complaint about the horrors of the music business – and it’s anything but that. Those who relish accounts of the decadent rock star lifestyle will not be disappointed: there were lots of women, there was lots booze, and there was drug abuse galore. Davies recounts it all with both breathtaking honesty and a panache that suggests he regrets nothing – though he tells us at several points that he’s sorry for his bad behavior – and he certainly has maintained good relations with his eight (!) children over the years (like Rod Stewart, he’s been prolific), so he clearly must have saving graces. Davies is also quite frank about his bisexuality – and he even names names, one of which is British blues legend Long John Baldry. So the title of this memoir, Kink, is likely Davies, who has a great sense of humor, playing with the reader.

Then there’s the matter of Davies’ fascination with the occult – and his recounting of strange experiences that some reviewers have claimed suggest schizophrenia. I’m no psychiatrist, but the scenes Davies describes seem more likely the effects of a life lived in high gear catching up to him. Nervous breakdown? Possibly. Schizophrenia? Seems unlikely given Davies’ ability to continue to function in the band. His fascination with spirituality, UFO’s, and meditation seems no more wacky than the eccentricities of any New Ager.

In other words, Davies shows himself to be a true rock star – freewheeling, slightly daft, open to anything.

The most telling part of Davies’ narrative, as one would think, would be his take on his relationship with his more celebrated brother, Ray Davies, the Kinks’ primary composer – and Dave’s long time nemesis. Dave claims, with a degree of insider knowledge that rings true for this musician, that Ray has never given him credit for his contributions to many songs. That’s one point of bitter contention between the two. But the sibling rivalry goes much deeper. Ray and Dave were the last two children (and the only boys) among eight born to their parents. And the Davies brothers couldn’t be more different as personalities: Dave is the gregarious, extrovert rocker, Ray the introspective, guarded minstrel.  As more than one author has noted, Dave lived the life depicted in songs like “Dedicated Follower of Fashion” and “Sunny Afternoon”; Ray wrote about that life. It was a powerful, symbiotic relationship, though not necessarily an equal one. Dave Davies, writing only a couple of years before the Kinks’ retirement, foresaw that retirement by noting that he’d reached a creative impasse with his brother that he thought only going their separate ways could address. And thus far, he’s held to that opinion.

So what we get in Kink is an honest, raggedly written account of the life of a rock star, warts and all. It’s a more daring book than either Clapton’s or Richards’ autobiographies mentioned above. Dave Davies does the genre proud in his own way – he holds himself accountable as much as he does anyone else in his story. Does he contradict himself at times? To be sure. Does he seem able to accept himself as a contradictory character? Absolutely. Kink is, if not as sensitively introspective as Clapton’s or as tellingly tough-minded as Richards’ books, their equal in that one comes away from it with the sense that one got the real Dave Davies.

Now for that other matter I mentioned.

As usual, I got the book cover image for Kink at Goodreads. While on the page, I checked out several of the brief “reviews” offered by Goodreads members. A pattern emerged: rather than critiquing Dave Davies on his writing (which ranges wildly from near prose-poetry to rambling – though copy edited – free writing) or on the content (Davies has a tendency to tell anecdotes that one expects to lead to more information or some insight, then wander off to another topic, sometimes abruptly) or even on the author’s fairness in depicting events (particularly in his relationship with brother Ray), a significant number of the reviews offered critiques of Davies’ life choices – he was castigated for not being a conventional, acceptable (whether the criticism came from sniffing conservative “morals” disapproval or lefty PC-ish “insensitivity” nannyism, the effect was the same) person.

Here’s an alert for those who read books about artists and others who violate the status quo. Criticizing artists for being – well, artists – and therefore different  – is the cultural equivalent of imposing Normcore on anyone whose life is different from some beige/gray sameness of experience that too many people are beginning to see as the only social/cultural option acceptable.

Art often comes from people who choose not to live predictable, or morally/socially praiseworthy lives. A list of those who would draw criticism for their “unacceptable” behavior would be quite long and would include figures such as Michelangelo, Shakespeare, Mozart, and Byron. All of these characters lived what could only be described as “offensive” lives in one way or another. All gave us great art.

So criticize Dave Davies as a rock musician who could have benefited from a better ghost writer, perhaps – not for failing to live a life that meets some standard for behavior that avoids offending anyone’s sensibilities at all costs. To ever understand or appreciate art, one must meet it on its terms. To attempt otherwise is to censor – and censorship is the death of art.

Of course such pedestrian social disapproval of one who has contributed so notably to the history of rock music would make Davies laugh, I’m certain.

That’s why he’s an artist. And that’s why Kink, like any biography or autobiography of an artist is a worthy read. It allows us better to understand one who makes art.

2 Responses to Dave Davies’ Kink: Rock Star Same as He Ever Was…