Suspense, yes…but an awful lot of thoughtful – and realistic – romance, too… 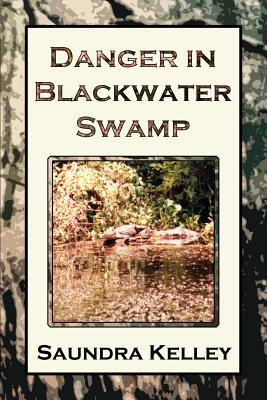 Danger in Blackwater Swamp by Saundra Kelley is one of those interesting books that benefits from having an identity crisis. Its principle desire is, I think, to be a standard offering in the suspense genre. Instead it winds up being only partly a suspense tale (to the author’s credit, it will bring readers to the edge of their seats at multiple points in the narrative); with – or without – the author’s permission, it also offers us a set of mature, engrossing characters in the protagonists who have lived and loved and lost – and who may (we begin to hope as we get to know them) get to love again.  As I read this book I found myself reminded of Anthony Trollope’s dictum about the characters he (or any writer) might create. To paraphrase, Trollope observes that characters have to do what they have to do – and it’s up to the author to be wise enough to allow characters that freedom.  Lucky for readers, Saundra Kelley is an author that wise.

The novel concerns one BJ Hathaway. A native of Northern Florida, an anthropologist, an avowedly independent woman, BJ finds herself drawn back to her home from her work as a professor and researcher in New Mexico by the death of her mentor who has left her not just his estate but also his fight to protect the archaeological, anthropological, and environmental treasures of a region they both love. This return “home” is complicated by two other characters – characters who complicate Hathaway’s life for very different reasons.

Matt Walker is BJ’s former romantic interest, a fellow anthropologist and conservationist. His relationship to Hathaway is prickly but deep and heartfelt. Jake Collins, on the other hand, the novel’s villain, is the epitome of the dumb and dangerous – a redneck criminal who carries grudges against BJ, her late mentor Ben Taylor, and – well, law and order and its representatives in any form. The dichotomy in these relationships and in how Hathaway handles them – each life threatening in its own way – gives Danger in Blackwater Swamp the juice of a good suspense novel and the emotional depth and wry pleasure of realistic romance.

Balancing such different story lines can get tricky – and Kelley sometimes has trouble from them. Hathaway’s independence – and insecurity – cause her to make some appallingly poor decisions in dealing with both men that, while they give the narrative electricity, especially as a work of suspense, they also sometimes demand more of the reader than the typical suspense or romance novel might. That is not a bad thing; in fact, for me it was one of the pleasant surprises about this book.  There is no steely eyed “doesn’t play by the rules” private eye or cop as hero, nor no svelte and sexy femme fatale. There are a couple of anthropologists on the far side of 50 having a difficult time admitting their love for each other, a creepy, habitually criminal good ol’ boy who feels that the world (or at least north Florida/BJ Hathaway) owes him, and a cast of minor characters who are all as real as people you know from the place where you grew up. The motivations in the book – greed, selfishness, hurt pride, anger – resonate because they are based in real life. The threats and challenges in this book are threats and challenges that we believe, mostly because they are threats and challenges that we have experienced or that people we know/know about have experienced.

The book has its minor niggles. An important underlying plot element in the suspense narrative, the role of greedy developers trying to undermine BJ’s conservation work, needs a clearer narrative arc. And for this reader too much time was spent on Jake Collins’ flight from justice in the latter quarter of the novel. But the climax is pitch perfect, both as romance and as suspense tale. The denouement, which some readers might find more suitable to literary fiction than to the genres of romance or suspense, I found satisfying because the complex character of Hathaway rings true in her behavior. And we get, if not a fairy tale ending, a satisfyingly realistic and adult conclusion.

If what you want from your genre fiction, whether romance or suspense, is predictability of form and action, Danger in Blackwater Swamp is not for you. But if you want a suspenseful tale with conflicted, thoughtful characters and a dose of realism, then give this book a read. You won’t be disappointed.