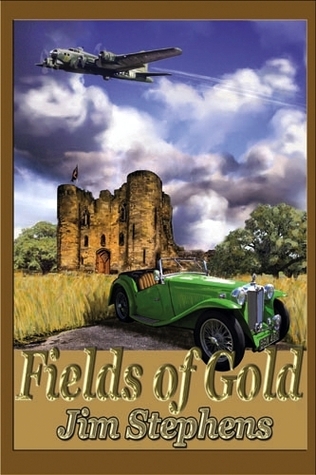 Jim Stephens’ Fields of Gold is a long book – of course, it covers more than three decades in the central character’s life, so there’s that. This historical romance (as the author terms it) is also a saga of sorts. The interesting (and perhaps problematic) thing about that is that the bulk of this 466 page opus covers only six years. Now granted, they’re six of the most extraordinary years in the history of Western culture – 1939-1945, the years covering World War II. But the fact is that the author’s treatment of these six years comprises more than half the novel. That accounts for pretty much all of the “history” part of the book. The “romance” part spans the entire book and offers a complicated love triangle involving the main character, one Mathew Weldon, scion of an American banking family, an English brewer’s daughter who teaches him about true love, Joanna Barton, and an American torch singer who finally wins his heart (sort of – that’s one of the novel’s cruxes), Suzanne Swift.

Weldon is a typical spoiled rich boy. He also has no respect for women. By the time he is attending Yale, his name among the numerous girls from “Seven Sisters” schools such as Vassar is “Matt the Ratt.” A foolish stunt committed in Manhattan in his airplane (yes, he’s that kind of rich) leads to his father’s sending Matt to England on bank business to try to force him to accept some responsibility. It is there where he meets Joanna Barton, a beautiful English girl, who first teaches Weldon how to be friends with a woman, then becomes his first love.

That’s where World War II intervenes, of course. Weldon, a flier, volunteers and flies missions, first for the RAF in the Battle of Britain, then for the US Army Air Force. That latter tour of duty separates him from Joanna in a way that makes her think he is dead. Misunderstandings ensue and he thinks she has married and has a child by the time he gets back from a German P.O.W. camp. He returns to America a much changed (and matured) person and reconnects with Suzanne, a girl he’d dated (and failed to conquer) during his wayward youth. His work at his father’s bank leads to a chance meeting with Joanna – and the discovery that she has borne him a son. And never married.

Complications occur, of course, and Weldon is forced to choose between two women he cares deeply about. Though that choice is made in a somewhat problematic manner and the reader may feel that Suzanne lost even as she supposedly won in the “who gets wonderful Matt” sweepstakes. The psychology of both Matt Weldon and Joanna Barton is thoroughly explored (again, Susanne Swift Weldon receives short shrift) – at times the novel’s characters slip into a modified type of stream-of-consciousness to report their feelings and thoughts, though this technique is not applied rigorously.

And that raises an interesting question – for this reader, anyway.

One of the techniques that Stephens uses, consciously or not, is a literary technique pioneered by the great British novelist H.G. Wells. Though best known today for his science fiction, Wells wrote various sorts of novels including romances and realist works such as Tono Bungay. What Wells liked to use was a method of composition he called “saturation” – the reporting in as thorough a manner as possible everything that could be told about the character and the events he is involved in over the course of the narrative. This methodology sets him in opposition to the “selection” methodology of modern fiction as practiced by Wells’ one-time mentor, Henry James. This method focuses on, as the term suggests, only selected events in characters’ lives that the writer can then, through artistic technique, emphasize to demonstrate how life is lived.

Stephens’ adoption of the saturation composition method may or may not appeal to all readers. I admit I struggled with it at first. I’m neither a regular reader of this genre (historical romance) nor a particular fan of having every event in a character’s story reported. So the level of detail, especially in the reporting of Weldon’s agonizing over his decisions concerning both Joanna and Suzanne I found occasionally frustrating. At times I found myself thinking, “Just do something, already. Even if it’s wrong.” However, I must admit that I felt I knew both Matt and Joanna well as characters. And their story is poignant and powerful.

Now, a quibble or two. One artistic, the other technical.

First, as I’ve mentioned before, a central character in the novel, the woman who marries the protagonist and is one-third of the triangle that drives the narrative, Suzanne Weldon, née Swift, is treated in ways that will make many readers, including this one, angry. The story of Matt and Joanna’s continuing love for each other so dominates the last quarter of the novel that this reader found himself feeling a sympathy for Suzanne based more on pity than any other feeling. One can certainly, upon reflection, consider this discomfort a proof of the novel’s grasp of the complicated set of relationships that the work delineates, but it doesn’t stop this reader from wishing that both Matt and the author had been kinder, more generous to her. Perhaps that’s what makes Fields of Gold unusual and notable as romances go – it has the rose – and the thorn.

The technical quibble has to do with the book’s copy editing. Part of this is from my own neuroses as an English professor, so I hope the author will forgive me – but this stuff is important. There are an unacceptable number of editorial errors (the vast majority of these copy editing, but there are one or two content errors, too). My hope is that in future editions of the book that the author will address these (or have them addressed).

Quibbles aside, Fields of Gold is an engrossing romance with wonderful historical detail. If historical romances appeal to you, I can recommend Fields of Gold as an unusual and interesting example of the genre.