Sometimes a compilation reminds one that, to paraphrase Sesame Street, “Some of these things are not like the others…” 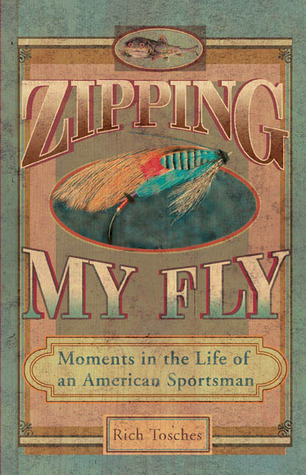 The next book from the 2014 reading list was supposed to serve as a light refresher from my literary and “social/critical” reading choices. Rich Tosches’ collection Zipping My Fly falls roughly into the pattern of most creative nonfiction about  the sport of fly fishing. But unlike the wonderful John Gierach’s humorous yet meditative works such as Sex, Death, and Fly Fishing or the late, lamented Harry Middleton’s equally enjoyable On the Spine of Time (a book especially close to my heart because Middleton fished the trout waters of my own beloved Smoky mountains), Zipping My Fly, a mélange concocted of columns Tosches wrote for the L.A. Times and supplemented with pieces he wrote for magazines (and perhaps solely for this collection), fails to connect.

Tosches’ book fails on a couple of counts and it’s important to note these both to be fair to him and as counsel to others who may be thinking of using collections of past newspaper/magazine columns or blog pieces to construct a book. This can be done successfully, but some thinking, revising, and editing may be in order. One wishes Tosches had done some of the aforementioned for this volume.

At least half the book is taken from newspaper columns. There’s nothing wrong with that – in theory. But it’s important to remember that if one is a newspaper sports columnist (as Tosches was when he wrote a number of the essays that comprise this work) that the immediacy of a newspaper column’s cultural references may not hold up well over time. Tosches makes numerous jokes about Rush Limbaugh (and his weight) that seem dated; even worse, he makes even more numerous references to the Clinton/Lewinsky scandal that seem even more dated. The final essay in the book, a reflection on the peace and solitude of fly fishing in a secluded Colorado setting a few days after 9/11 could have been a meditation on the timelessness of nature in a world gone sideways – unfortunately, it reads more like the immediate emotional reactions of a typical American from that period of uncertainty and fear. Some thoughtful revision (and editing out of the political jokes which, at the time of the book’s publication in 2002 were already dated and which are, in the main, more mean-spirited than funny) could have fixed this problem and made the essays about fly fishing – and all that can go right and wrong in “the quiet sport” much more enjoyable. Tosches can be funny when writing about his good/bad fortune and his skill/ineptitude at a sport he clearly loves. More focus on that – and less on being “current and hip” – would have made this selection more pleasurable for his typical audience – fly fishers.

A second issue – and this I place squarely on the shoulders of Tosches’ editors – is the book’s organizational structure – and  cohesion. Any book such as this one that is a collection, an olio, a book that is constructed of diverse pieces of varying tone, needs threads to help lead readers from topic to topic. This could have been done easily by simply using section headers such as “Big Time, Professional fly fishing,” “On Becoming a Fly Fisher,” “Fishing with my Buddies,” and “Fishing with my Kids.” Why this wasn’t done, since it would have solved the “now I’m writing about buddies/kids/my youth/etc.” mish mash that is Zipping My Fly escapes me. But the fault for such a poor job of offering readers guidance through the collection is not solely the author’s fault. That’s what editors are for.  Tosches’ editors did him no favors.

If you’re a fly fishing aficionado as I am, you may be willing to look past these issues and enjoy Zipping My Fly for what it is: a sometimes humorous, sometimes sentimental (and often honestly heartfelt) group of essays about angling, nature, and being all too human in the wilds of nature. But of you’re looking at beginning your acquaintance with either fly fishing or its literature, choose one of the other works/writers mentioned above. Save this book until you’re hooked on the quiet sport – and this work’s shortcomings will annoy you less.