Things we can do with words: Nicholson Baker’s Room Temperature… 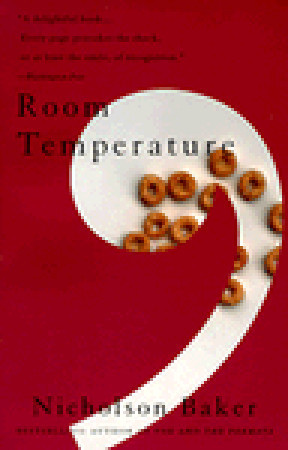 To move from the wildly popular Hunger Games to Room Temperature by Nicholson Baker is quite a leap for any reader – but, I’ve made it. So this entry from the 2014 reading list is an essay that will look at what characterizes literary fiction. And how it can be both rewarding and a little maddening to engage with a master practitioner of the form.

Of course, the chief characteristic of literary fiction is that it has that amorphous (and arguable) quality known as literary merit. As a rule, the sorts of things that give literary merit are complex characterizations, realistic situations and emotional expressions, and some attempt to get at that problematic goal called truth. (The truth in this case falling more likely into that category of activity that Aristotle terms phronesis, or ” gaining cultural truth,” rather than scientific/observational discovery which the great philosopher terms theoria.) But I suppose it would only be fair to Aristotle to note that he does say that art (which great literature is) is itself another activity, poiesis. Okay, enough of this – I’m beginning to sound like Nicholson Baker.Room Temperature is a small book (my edition was only 116 pages), but it is dense both in the complexity of its ideas and emotions – and in its language. In fact, the characteristic that most often causes arguments between the literati (those whose major interest is in literary fiction) and other writers/readers is the insistence of literary types upon using more of the language than the average person finds comfortable/comforting. (Factoid: the English language has somewhere between 250,000- 1 billion plus words, depending on who’s counting. The average “educated” American vocabulary is about 20-35,000 words. But fiction readers may know more words than others, even if those others read, too.)

Trust me. That’s important to Nicholson Baker. Here’s a sample of how Baker can stretch one’s vocabulary:

As a result of the weather, I was wearing a sweater for the first time in months, one Patty had given me for my birthday: a brown monster stout with various fugal inversions and augmentations of the standard cable knit and consequently glutted with insulational dead air, its corona of lighter outer fibers frizzing out three-eighths of an inch or more from the slubbed and satisfyingly clutchable weave that formed the actual structure underneath, so that the sweater, along with me, its wearer, appeared to fade without a demonstrable outer boundary into the rest of the room, as tuning forks or rubber bands will see in their blurred vibration to transform their material selves into the invisible sound they generate; a machine-made sweater, but manufactured apparently with Xenakian lurches and indecisions programmed into the numerically controlled needles that, unlike the chain flayings and bleaching stains used in production lines to antique new furniture, gave it to my eye and attraction distinct from the irregular grandmotherly alternations between close attention and indignant abandonment at historical preservation meetings prominent in handmade knitwear.

This is not the simplicity of Hemingway. In fact, it’s the antithesis of Hemingway’s “one true sentence” mantra. Baker is wildly discursive and evokes the work of other discursive types from Laurence Sterne to Henry James to Virginia Woolf. There are also, I suspect you’d agree, numerous words and phrases that challenge the average readability formulas. Baker makes his readers stretch: he writes long, complex sentences and he uses lots of vocabulary that makes the dictionary a needed companion.

There are some who claim this is elitist. And others who offer spirited defenses of such “elitism.” I’m not sure what prompts people to attack other people for using words that they don’t know. Maybe one sort sees using unusual or seldom used words as anti-democratic and classist. But isn’t taking advantage of the wide variety of words English has to offer simply exercising freedom of choice?

Besides, that willingness to discourse widely and circuitously, to investigate the comma in all its permutations, to consider the effects of nose-picking, pooping, truth telling on marital bliss, to somehow construct a funny, thoughtful, sensitive, engrossing meditation that covers in real time the rocking of one’s baby daughter to sleep while covering in psychological time years, decades, even, of a writer’s life and loves is an impressive feat. As Baker himself observes:

As [my wife] once told me years later…in repairing [an] object  you really ended up loving it more, because you now knew its eagerness to be reassembled, and in running a fingertip over its surface you alone could feel its many cracks—a bond stronger than mere possession.

In Room Temperature Nicholson Baker fixes us in time as he helps us come unstuck at the same moment. He gives us his life – and ours.