My Terry Pratchett Problem…the “there” there…

To paraphrase Jimi, there are writers – make that readers – I do not understand… 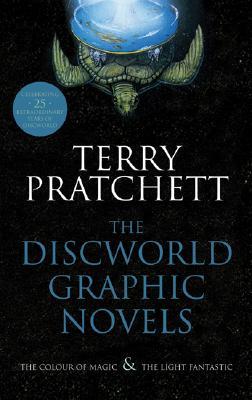 I admit readily that I am no fan of science fiction and fantasy. I like Tolkien fine, but having read the Rings trilogy in college and The Hobbit my first year out of undergrad school for my first teaching job, I have felt absolutely no urge/desire/itch/yen to read those worksagain. During that same period of my life I read the Asimov Foundation trilogy, Heinlein’s Stranger in a Strange Land, and Frank Herbert’s Dune, all at the behest of friends whose intelligence and taste I respect deeply. I found them interesting, as I find any well told story interesting, but I was not been inspired to read more by Asimov, Heinlein, or Herbert. See first sentence of paragraph.

Around the time that I read The Hobbit, I stumbled upon Phillip K. Dick (remember, I am not an activist sci-fi reader). I enjoyed Do Androids Dream of Electric Sheep? – yet I have read no other Phillip K. Dick.

Later on younger friends whose intelligence and taste I respect pushed me to wrestle with one of sci-fi’s cousins, cyberpunk. I dutifully read Gibson’s Neuromancer and a story or two by Bruce Sterling. Interesting stuff – but, as you’ve guessed by now, I’ve read no more.

This is not true of a couple of other writers whose position in the science fiction pantheon seems to be argued about – as best I understand. I am a huge admirer of both Kurt Vonnegut and Ray Bradbury. I have read a number of titles by these authors and, in fact, have re-read Slaughterhouse-Five, Cat’s Cradle, andBreakfast of Champions as well as The Martian Chronicles and Fahrenheit 451 more than once. But I hear murmurings – more than murmurings, actually – that Vonnegut and Bradbury aren’t “real” science fiction writers; the opinion seems to run along the lines of “they were really ‘literary’ aspirants using science fiction as a vehicle for their literary efforts.” I’m not at all sure why this is wrong, but this seems to be the gist of the complaint from science fiction purists.

Last year for the 2013 reading list, of course, I read Douglas Adams for the first time. I found his work charming – intelligent, funny, elegant, and absurdist in the best Monty Python sense. As I noted in my essay onThe Hitchhiker’s Guide to the Galaxy, it was the most enjoyable science fiction I’d ever read.

I approached these novels by Terry Pratchett (full disclosure: I went in search of some Pratchett at my favorite used book store and this volume with the 1st two novels of the Discworld series in graphic novel form was what they were able to dig up for me) in the fulsome hope, based on the opinions of friends whose intelligence and taste I respect in the hope that Pratchett would make fantasy (another genre I feel no great attraction to) as enjoyable for me as Adams had made sci-fi.

Pratchett certainly has some wonderful moments, and his blending (as well as satire) of ancient creation myths, beliefs in necromancy, and consumer culture has some great moments – the lost luggage that literally follows Twoflower, Discworld’s first tourist, is a delightful running gag. And the send-ups of classic sword and sorcery works (i.e., Cohen the Barbarian, a wizened warrior in his dotage) are clever – if slightly obviously so.

But I found the works lacking somehow in ways that I didn’t find Hitchhiker’s Guide lacking.

Part of this, I think, may come from the format. My view of graphic novels is colored by a Boomer childhood reading DC and Marvel comics – and outgrowing them in early adolescence (I did have a brief fling with Tales From the Crypt at about 14). So I view “comic books” slightly askance – although having read a volume ofAmerican Beauty I see their value as an art form.

In this case, I don’t think Pratchett is particularly well served by the graphic artists. Other readers have noted this lack of wit in the artwork – it’s the typical sort of stuff in fantasy comics as best I can tell: characters are either comic such as the Wizard Rincewind and the tourist Twoflower (and, truth be told, Cohen) or escapees from a body builders’ gym  such as Hrun or predictable approximations of scary such as Death and Scrofula. The female characters are depicted in a highly sexist manner and all (except a couple of crones) are fantasy lit variations on Vargas girls. I don’t think this necessarily does Pratchett’s novels a service – I suspect somehow some of his satirical edge in, for example, making female characters predictably voluptuous but unpredictable personalities which would work to his advantage. Having them meet adolescent boys’ fantasies in appearance undercuts the writer’s aim here.

And there’s this, which I’m sure won’t make fans of Pratchett happy. A lot – too much – of the plot and characterization of The Colour of Magic and The Light Fantastic seem to me like the fantasy genre equivalents of Arthur Dent, Ford Prefect, and Zaphod Beeblebrox. Maybe that’s coincidence – but the similarities struck me as oddly convenient, given that Pratchett’s works came in the wake of Adams’s success.

As a good friend and a loyal Pratchett fan told me when I expressed concerns about writing about these books because of these qualms, maybe part of my problem is that, as is the case with science fiction writers, a writer like Pratchett who creates an entire world and then a saga of its history is operating with a long view – true understanding of all that he’s trying to accomplish takes a commitment to reading several works to grasp his perspective. I hope I have admitted freely to my biases. And I intend to find and read at least another (or maybe one of these) Discworld novels in its true form to get a better sense of what Pratchett’s work really is.

I know that Pratchett is enormously popular and that his work is highly esteemed by many people, including, as I have noted, friends whose opinions I value highly.

But for now, for me at least, Adams work seems superior to me.

4 Responses to My Terry Pratchett Problem…the “there” there…