Maeve Binchy’s fictional world is one where those who try to do good turn out well…as for the others…. 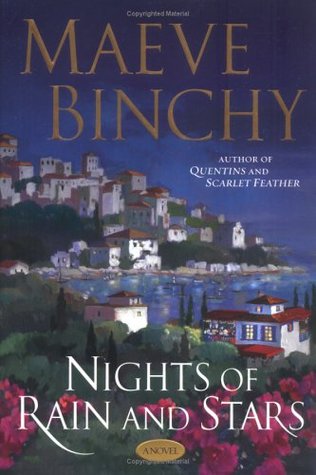 As I’ve made clear by now to any who read my essays on the books I read, I have devoted 2014 to trying works outside my normal range of reading interests. As a result I’ve read some popular YA literature (and evoked a storm of controversy), tried a couple of of works by the most and celebrated of the recently anointed and highly admired “genre literati” (and found them interesting – if not as arresting as some of my colleagues do), and taken a look at the power that formula fiction seems to have on the reading public.

I suppose it is in that spirit that I picked up a copy of Maeve Binchy‘s Nights of Rain and Stars. The wildly popular Irish author produced numerous bestsellers and proudly proclaimed herself a happy composer of what are commonly called in the parlance of publishing “beach reads” – effortless, entertaining and ultimately forgettable tales.  Nights of Rain and Stars seems to me to be exactly the sort of book well qualified to be a satisfying “beach read.”

Given my castigation of Nicholas Sparks last week, it seems to me that I should make some differentiation here lest readers think that I mean to tar Binchy with the same brush. My problems with Sparks have to do with his technical sins as much as with his writing to the specifications of a genre formula (and let’s be clear – one of the characteristics of genre is that it is formulaic, a neutral characteristic in and of itself – whether that formula ends up a positive or negative is largely in the hands of the writer). The Sparks book I read, A Walk to Remember, was formulaic – but it was also poorly written and edited.

I have to say that neither of those flaws is true of Binchy’s Nights of Rain and Stars. Like Sparks, Binchy plies the romance genre, albeit more on the side of romantic comedy than romantic drama. Binchy writes much more surely than Sparks, and her plots and subplots, though at times slightly improbable, are worked out neatly and plausibly. As light entertainment goes (and let’s be honest, that’s what a beach read is, right?), one could likely not do better than a Maeve Binchy novel.

This particular work concerns, as I understand is often the case in Binchy’s novels, a group of friends whose interpersonal struggles draw them together and eventually foster romances. In this case the group begin as strangers visiting a village called Aghia Anna on one of the Greek islands. Bonding first over their connection to a tragedy (a local villager who ferries people back and forth from the island to the mainland is killed when his boat blows up – a boat that had ferried them to the island – the “there but for the grace of God” scenario), they  soon grow close as it emerges that all of them are running away from something: Else, a beautiful German TV news star is running away from a toxic relationship; Thomas, a California university professor is running away from his fear that his divorce will cost him his relationship with his son; Fiona is running away from the disapproval of family and friends in Ireland over her relationship with a sleazebag boyfriend Shane; and David is running away from taking on the responsibility of the family business back in England. As they share their stories (and learn valuable lessons from both natives such as Andreas, a taverna keeper and Vonni, an Irish expatriate, who, we learn, have their own crosses to bear) Thomas and Else find romance with each other – and, one feels at the novel’s end, so will David and Fiona (Shane, that bastard, gets himself locked up good and tight in jail in Athens, a fitting fate after his abuse of Fiona).

That’s pretty much it. Thomas is a professor, yes – but it is his role as father and as understanding listener to Elsa that matters to the story. Fiona is a classic stereotype – the girl who cannot see, despite all her friends’ warnings, that her beloved is a louse. David is the classic sensitive soul who is just made, we realize, to soothe Fiona’s pain once she realizes that Shane is the piece of shit that we readers see that he is from the get-go. Vonni and Andreas are there, of course, to offer the perspective of the sadder but wiser. And, of course, even they have realizations that make them even wiser – and perhaps slightly happier – though they’re still sort of sad because, after all, life does that, doesn’t it?

Yes, it’s charming fluff. Much delicious food is eaten and much delicious wine is drunk. Characters learn what it means to be responsible and deal with their issues, to love again after heartbreak, to embrace the challenges that life offers. And, in high comedy style, the couples pair off and we get, if not the classical conclusion of weddings, at least the clear suggestion that weddings are in the futures of these characters.

This is all presented in a style that is breezily enjoyable without slipping (at least too often) into being facile. Yes, Maeve Binchy wrote formula romances that are enjoyable and likely forgettable (the author died in 2012). But she handles the formula with aplomb, good grace, and an effortlessness that came of being serious about her writing.