“I think women rule the world and that no man has ever done anything that a woman either hasn’t allowed him to do or encouraged him to do.” – Bob Dylan

“Instead of getting hard ourselves and trying to compete, women should try and give their best qualities to men – bring them softness, teach them how to cry.” – Joan Baez 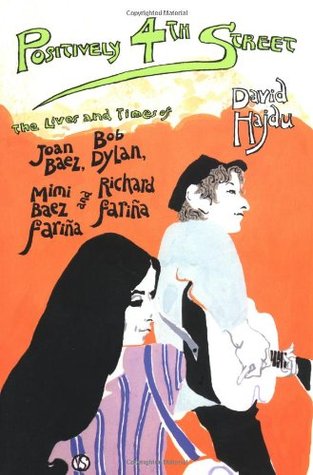 Joan Baez and Bob Dylan have had a long and complicated relationship.

There have been a number of books written about that relationship (including memoirs by both Dylan and Baez themselves) which try to get at what drew them together and what drove them apart. To save you any apprehension, the upshot is that nobody, not even Dylan and Baez, will ever understand. That doesn’t mean that writers and scholars won’t try to understand, of course.

One of the most interesting attempts to explore the Baez/Dylan axis of complexity is David Hajdu’s fascinating Positively 4th Street. Hajdu doesn’t get any further than any other scholar or writer (or Dylan or Baez) with explaining the complexities of the Dylan/Baez relationship, but his book is fascinating because he takes an unusual tack in his exploration. In a plot device that is positively Shakespearean, Hajdu uses the microcosm of the relationship between Joan Baez’s sister Mimi and Richard Fariña to parallel the macrocosm of Bob Dylan/Joan Baez.

Robert Christgau’s review of Positively 4th Street, of which I suspect Hajdu is not particularly fond, accuses the author of trying to advance the argument that Richard Fariña was possibly a genius the equal of Bob Dylan. To be sure, Fariña had an immense talent. In fact, I’ve added Fariña’s only book, Been Down So Long It Looks Like Up to Me, to my reading list for this year (I read it as an undergrad over 40 years ago – wow, this sentence gives me chills). Christgau makes a good argument; he points to Hajdu’s book on Billy Strayhorn and Duke Ellington which posits a similar thesis. I don’t think, however, that Hajdu is trying to do exactly what Christgau claims. Even if he is (and I grant Christgau his thesis thus), what happens is that the relationship between Joan Baez and Bob Dylan takes over Positively 4th Street and the comparisons between Dylan and Fariña resonate more in terms of their relationships with the Baez sisters than as comparisons between two great talents, one of whom conquered the world (and won the Nobel Prize for literature) and one of whom died senselessly in a motorcycle accident at 29.

To fully appreciate Hajdu’s book, it is important to recognize how important Joan Baez is to the history of popular music. A gifted performer with a spectacular voice, Baez was the breakthrough artist of the folk music revival. We tend to think of post WWII popular music in terms of the rock and roll (and then rock) revolution which swept aside the type of music which we now denominate “American Standards” (Gershwin, Porter, Berlin, et al.). But contemporary with the rock revolution was the rise of folk music. The 4th Street referenced in Hajdu’s title (and Dylan’s song title from when Hajdu takes the title of his book) is in Greenwich Village, one of the hotbeds (along with Cambridge, MA) of the movement. What Elvis Presley was to the rock revolution, Joan Baez was to the folk music explosion – she was/is “Queen of Folk” and, like the King, a performing artist of enormous talent (and personal attractiveness) who gave a face to the sound. Her influence was enormous; artists ranging from Janis Joplin to Joni Mitchell cited her as an inspiration.

When Joan Baez met Bob Dylan, he was still an obscure musician living mostly hand to mouth in Greenwich Village despite having landed a recording contract with Columbia (his first album sold only 5000 copies, barely enough to cover its recording costs). Taken by Dylan’s mumbling, sometimes insecure, sometimes brooding personality and his remarkable gifts as a songwriter, Baez took it upon herself to promote him. Her connections helped Dylan build an audience. She took him on stage with her, on tour with her, and eventually into bed with her. Their love affair made them the poster couple of the hipster folkies and gave Dylan a visibility – and credibility – that prepared him for the stardom he attained.

By the time Baez and Dylan parted (bad breakup), Dylan had morphed from folk hero to rock star. Each went on to long and storied careers, and each is referred to by that most overused of terms, musical legend. Each married others, but over the years they have had a number of reunions that suggest that they have a bond that will not break – except, perhaps, through death.

Death, sadly, did separate the the “other couple,” Richard Fariña and Mimi Baez, the Lysander and Hermia to Bob Dylan and Joan Baez’s Theseus and Hippolyta. Mimi, like Joan, loved the guitar and folk music; unlike Joan she was happier in the background than as a star, at least with Richard. Richard Fariña craved the spotlight; he wrote both fiction and folk songs with an eye towards reaching levels of success comparable to his Cornell university roommate, the celebrated author Thomas Pynchon, or his sister-in-law’s boyfriend, the celebrated musician Bob Dylan. Richard and Mimi released two albums, both moderately successful. A handful of his songs, including “Pack up Your Sorrows” and “Birmingham Sunday,” have been widely recorded and remain part of the modern folk music canon. Farina’s greatest success, Been Down so Long…, was released only two days before his death in the motorcycle accident noted above. Though some (including perhaps Hajdu himself) believe that Fariña might have reached the heights of his two friends Pynchon and Dylan, he may just as likely have been a figure of his time, like Phil Ochs or Richard Brautigan. Mimi Baez went on to a career in line with her sister Joan’s: she performed some and worked on social justice projects. She married again, but the marriage was brief. Mimi Baez Fariña  died in 2001 having spent the last 35 years of her life trying to get past Richard’s death. As Joan Baez observed in her memoir, Hajdu tells us, “Mimi never really let go of Dick.”

Dylan and Joan Baez live, in a fashion Dave Mason’s phrase describes well, alone together. Bob Dylan will pick up his Nobel Prize shortly while on tour in Sweden. Joan Baez was inducted into the Rock and Roll Hall of Fame this year. Whether they ever got over each other is a question that may never be answered. Perhaps we’d know had Richard Fariña lived. Positively 4th Street ends with a memory from Fariña’s editor: his next book was to have been a memoir about the relationships among himself, Dylan, and Mimi and Joan Baez.