The Readable and the Not Yet Readable… 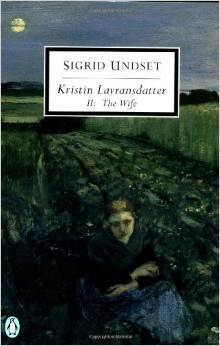 I’m about 100 pages into Book Two of the Kristin Lavransdatter trilogy, The Wife.

This is not the book I expected to be writing about. I began Book I of The Tale of the Genji by Murasaki Shikibu in the Royall Tyler translation. About 50 pages in I realized that I could not make myself read it. Whether it is Tyler’s translation or the work itself, I found it impossible to stay the course. The Tale of the Genji’s focus on the life of a young prince at the emperor’s court in medieval Japan is certainly a fascinating topic. Still, 50 pages in I found myself completely unengaged.

When one reads (well, when I read), there is always that moment of absorption – that moment when one, in a psychologically satisfying way,  “enters” the world of the story. Perhaps it was the artificiality of the storytelling in The Tale of the Genji; there is certainly a level of distancing in the text that reflects both the formality and the subtlety of Japanese culture. Perhaps the translation, scholarly and thorough as it is, is problematic in that it adheres to the letter of the language (in other words, it transliterates rather than translates, an ever more challenging ). For whatever reason, I found that I simply bounced off Skikibu’s classic each time I attempted to enter it.

That brings us to Book II of Undset’s classic of medieval Norway.

I am engrossed in this second volume of Kristin Lavransdatter. Much of the credit goes to Undset herself, a writer capable of drawing  the reader into 14th century Norwegian life through accuracy of detail that creates a verisimilitude as gripping as that of Defoe’s A Journal of the Plague Year. Moreover, Kristin, her husband Erland, Erland’s brother the priest Gunnulf – these major characters are vibrantly portrayed (as indeed are even minor characters).

Undset’s genius would be lost to those of us who do not read Norwegian, however, were there not an English translation that did justice to her writing. The Tiina Nunnaly translation, highly honored, does Undset’s greatness credit: it brings the power of Undset’s writing to an English speaking audience by rendering the novel(s) into highly readable contemporary English while respecting Undset’s artistic vision.

This is something that I must say it seems to me that Tyler, the translator of The Tale of the Genji, fails to achieve.  Despite an extensive introduction in which Tyler explains his methodology and aims (and these are scholarly and admirable), somehow one finds the translation too attentive to attending to Shikibu’s cultural milieu, not attentive enough to the needs of contemporary readers. As scholarship it is certainly due respect; as a translation for even sophisticated general readers, it may be perhaps too arcane.

So perhaps the issue is one of translation. If anyone can recommend a more congenial translation of The Tale of the Genji, I’ll be happy to try it. For the present, however, I’ll stick with Kristin Lavransdatter:  The Wife and then The Cross.