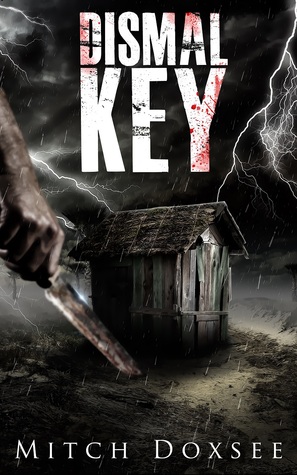 Mitch Doxsee’s thriller Dismal Key walks an interesting line.It certainly can meet the criteria for Young Adult (YA) literature; its protagonist, McCluskey Harvey, is 16 and in the course of the novel develops his first serious romantic relationship. And, as in any good coming-of-age story, the protagonist learns powerful life lessons about himself and what he will/will not do, no matter how evil the opponent he faces.

But Dismal Key is also a powerful tale about a sinister and under-reported crime; the kidnapping of adolescent girls for the sex slave trade. How Doxsee manages to weave together a story about a teenager’s annual summer visit with his grandparents with a riveting (and frightening) thriller about human trafficking and a serial killer that doesn’t feel contrived (unlike some popular YA works) is a credit to the author’s seriousness of purpose.

Doxsee chose the subject of human trafficking because of his first hand experience working with some of its victims while doing mission work in Amsterdam during his college years. That personal knowledge under girds Dismal Key and  gives the novel both verisimilitude and a passion that will ring true for both teen and adult readers. Doxsee also calls upon his youth spending summers with his grandfather to evoke both the geography and lifestyle of the Ten Thousands Islands area of Florida as his setting. Unlike, say, a current YA blockbuster, nothing in the story feels contrived or developed in story meetings.

The story itself uses crosscutting narratives concerning the kidnapping of young women, McCluskey’s visit with his grandparents, his budding romance with childhood friend Chloe, and a former CIA agent named Becker’s hunt for those conducting the human trafficking. As these interrelated narratives triangulate and eventually merge, readers are introduced to admirable characters such as McCluskey’s grandparents and the driven. conflicted Becker; despicable characters such as the thug Karam and his “father,” (and boss) Marcus, who operate the human trafficking group that precipitates the novel’s conflicts; and the chillingly frightening Richard, called The Hippie, a nauseatingly realistic evocation of a serial killer.

McCluskey’s conflicts – between his feelings for Chloe and his youthful hormones, between his desire for revenge against The Hippie for his kidnapping of Chloe and his sense of right and wrong, and ultimately, of course, between McCluskey the kid and McCluskey the man propel this story – and enrich it in ways that are more satisfying than any YA novel I’ve read recently. This is a book about a real, believable kid drawn into a real, if frightening world, who struggles and stumbles but ultimately succeeds in both proving himself to the adult world – and in realizing that he still has some growing up to do.

If you know a teen (or an adult fan of YA thrillers) who wants a novel that delivers excellent life lessons along with chills (and some actual horror), then by all means point him or her at Dismal Key. It meets all the requirements of the genre – and offers a chilling glimpse into a dystopia that is, as Doxsee knows, all too real.