The McDonaldization of pretty much everything…part 4

“McDonaldization affects not only the restaurant business, but also, education, work, healthcare, travel, leisure, dieting, politics, the family and virtually every other aspect of life.” – George Ritzer 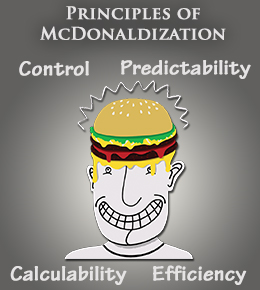 The success of Ray Kroc’s methodology, named McDonaldization after the restaurant chain Kroc built into the most powerful and successful food service company in the world,  impressed, first McDonald’s competitors, then those in charge of other – not just industries, but other areas of human endeavor.

Wanting to be more efficient – and, hopefully, more effective – is not a bad goal in and of itself. Where this can go awry – and go awry it has – is when – as has happened in proof of Robert Merton’s law of unintended consequences – this principle is applied in cultural situations where its application makes no sense. Those other elements of McDonaldization – predictablility, calculability, and control – also play roles in moves toward efficiency. It is almost impossible – at least in a culture besotted with the ideas (and ideals) of capitalism for these unintended consequences not to occur.

If this sounds like it would be mind and soul numbing, that’s because it is. But it is also efficient, calculable, predictable, and easy to control. And it has brought McDonald’s enormous success and wealth.

That enormous success and wealth McDonald’s achieved through its efficiency/calculability/predictability/control methodology became first an demonstrable example, then an influential model, finally a mantra embraced by disciples of its core principles – who then, however wrongheadedly, decided that its methods could be applied not just to fast food or other retail enterprises but to any type of institutional system whether that system’s primary function was retail or not. Every human activity, it has been concluded, should be about money – no matter how nonsensical that might seem.

And that decision, the decision to McDonaldize every institution – medicine, education, journalism, even religion – has had far reaching consequences for us culturally. Here are some brief examples:

It should be obvious by now that McDonaldization’s tentacles have latched onto nearly every aspect of our lives. In the final installment of this series, we’ll discuss how this hyper rational standardization of human experience has led us into a culture that is in truth hyper irrational.

2 Responses to The McDonaldization of pretty much everything…part 4