Never apologize, it’s a sign of weakness…When They Were Boys by Larry Kane

“In Liverpool, no one ever really walks alone.” – Larry Kane

How much do stars owe to those who helped them become stars? 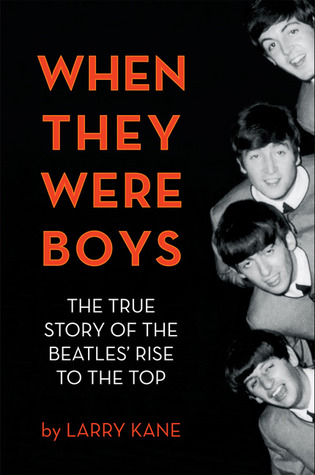 When They Were Boys by Larry Kane (image courtesy Goodreads)

That is the central question in Larry Kane’s latest book on The Beatles, When They Were Boys. Kane has the credentials to ask such a question – he traveled as part of the press entourage attached to The Fabs during their entire 1964 and 1965 tours (and most of their 1966 tour). In that period he met many of the key players in the background of what is historically called Beatlemania: Brian Epstein, the record store executive who became their manager and paternal figure; Tony Barrow and Derek Taylor, two brilliant journalists and PR experts who helped the rising band become a media tsunami; Neil Aspinall, Mal Evans, and Tony Bramwell, local Liverpool mates who served as protectors, gofers, and confidants for the guys at the center of the maelstrom; and an array of former supporters, promoters, and club owners/managers ranging from Alan Williams (who died on the last day of the heinous 2016) to deposed Beatle Pete Best’s mother Mona to Sam Leach, a promoter who helped The Beatles gain better engagements and expand their reach beyond Liverpool to Manchester and other cities.

Each has a story to tell – and an ax to grind.

Kane, who moved from reporting into a highly successful career as a TV anchor in Philadelphia, did much leg work in tracking down better and lesser known figures in this story. He clearly delighted in talking to many of the figures mentioned above (those still living, at least – Williams is liberally quoted and cited in this 2013 book), and since Kane himself knew and interviewed John, Paul, George and Ringo, there is an authority to Kane’s work that is impressive.

If only he didn’t undercut it all….

This is a rich book, full of interviews and material that only a writer with a long and at times intimate history with The Fabs could put together. Unfortunately, Kane veers into a sort of “gotcha” approach to the story of the years leading to the annus mirabilis of 1963 when The Beatles took first England and then the world. He suggests, fairly or unfairly, that somehow The Beatles owed something to Mona Best, Alan Williams, and Sam Leach – all at one time or another official or unofficial managers of the  group. The biggest carper of this group (Kane is somewhat circumspect in his treatment of Mona Best who died in the late eighties) is Alan Williams. While Kane certainly covers Williams’ shoddy treatment of the group at the beginning of their careers (he forced them to work in his club, the Jacaranda, without letting them play for some time and only took them to Hamburg because Rory Storm and the Hurricanes, Ringo’s original band, turned him down), he also allows Williams to vent vociferously about The Beatles’ treatment of him. At his most vitriolic, Williams describes them thus:

Then and now The Beatles were users, and once they used a person, they discarded him.

It is hard to say if  my reaction to Kane’s critiques of John, Paul, George, and Ringo stems from my distaste for the TV anchor playing investigative reporter or from my hero worship of the Beatles. I’m not sure it matters. Readers can draw their own conclusions. In dealing with each Beatle individually, Kane allows his personal feelings to color his treatments. He liked George and Ringo, admired John despite his flaws, and seems to have ambivalent feelings about Paul.

Maybe this is why When They Were Boys is such a frustrating read. Kane knew The Beatles as few ever could or can. As a witness to the incredible stresses that went along with their phenomenal success, he could offer insights into them that almost no one other than a member of the inner circle (almost none of whom are still alive) could offer. Having been a great success in his own professional life, one would think he would have at least some empathy for them. Kane was himself in his early twenties when he traveled with The Beatles. That should also have created some empathy – young man reporting on those his own age.

That he couldn’t find that empathy makes a rich book poorer.

5 Responses to Never apologize, it’s a sign of weakness…When They Were Boys by Larry Kane