” The world was full of men and women like Luke and Kit. Some had given up great hopes because they were too good to tread down others in their quest. Some had quenched great talents because they were too fearsome or too weak or too lazy to feed their lamps with oil and keep them trimmed and alight. Some had stumbled through life with no gifts of talent, without even appreciation of the talents of others or of the flowerlike beauties that star the meadows.” – Rupert Hughes 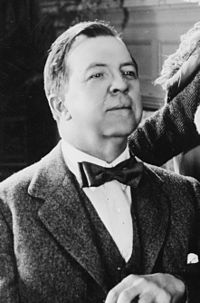 This fifth volume of the collection (volume 1 here, volume 2 here. volume 3 here, volume 4, here) I’m working through, The World’s 100 Best Short Stories, focuses on the theme (I really should be using the word topic rather than theme, I suppose, but there we are) Drama. That term drama certainly gets a workout in this volume. The reader gets a taste of melodrama, naturalism,and psychological drama; even the classic twist of fate gets a workout in a couple of stories.

As has been usual in this collection, this volume is a mixture of writers now forgotten (or barely remembered now though popular in their time) and writers whose place in the traditional canon of literary stars is secure and likely to remain so. Thus one reads a story by the (in her time) highly popular Kathleen Norris, then a story by canonical stalwart Stephen Crane or a story by once popular but now forgotten Rupert Hughes (pictured), then one by one of the literary giants, Leo Tolstoy.

Hawthorne, Dickens, and Balzac are represented as are lesser but still noted literary figures like Alphonse Daudet and Guy de Maupassant (about whom I’ve written recently).

Given the date (1927) when this collection first appeared, it should not be surprising that Naturalist works are well represented. Theodore Dreiser was still active and his literary descendants such as Sinclair Lewis were at the height of their fame and prestige (Lewis would win the Nobel Prize for literature three years after this collection was published for works that extended naturalism into social critique such as Main Street and Babbitt).

The Hawthorne, Dickens, and Balzac stories should be mentioned first, as they provide examples of the types of drama mentioned above. Hawthorne’s “The Prophetic Pictures” is a classic example of Hawthorne’s fascination with the psychological effects of intense self-examination, Puritan style. A famous painter comes to colonial New England and paints the portraits of a young couple who are startled (and eventually psychologically affected) by the revelation of their hidden natures in the paintings. A tragedy is averted only because the painter happens to be present and acts as part psychiatrist, part shaman to prevent the husband from killing the wife as the madness suggested in his portrait emerges as he looks at it.

The Dickens story “Dr. Manette’s Manuscript” is a social critique in a sort of proto-Naturalist style of the aristocracy’s abuses of power in the decades leading up to the French Revolution. A pair of young aristocrats draw the narrator, a Dr. Manette, into an affair involving their sexual abuse of a beautiful young peasant girl and the murder of her brother who tries to defend her. When Manette tries to report their conduct to those at court who could bring them to justice, they have him imprisoned for the rest of his life. Manette writes down his story, the manuscript of which forms Dickens’ tale.

Balzac’s “The Mysterious Mansion” will seem familiar to those who know their 19th century horror. While visiting the town of Vendôme, a young man becomes fascinated by a decayed chateau. After much investigation he discovers that a servant at the inn where he is sojourning knows the history behind the chateau’s state. Rosalie, the servant, relates a tale of adultery, passion, and revenge. The countess who is mistress of the chateau enters into an affair with a young Spanish nobleman who is a war prisoner in the town. Her husband the count discovers the two – actually he discovers that the young nobleman is hiding in the closet of the countess’s boudoir. In a scene lifted from Poe, he has a mason brick up the closet, trapping the young Spaniard inside. The macabre tale ends with Rosalie explaining that the count stayed in his wife’s room day and night to prevent her from rescuing her lover and with her descriptions of the prisoner’s pleas which begin vociferously but which gradually become softer and softer as he starves to death. Deliciously melodramatic.

The other stories in this volume serve as lessons for the astute reader. Two are by popular writers of their time, two by those canonical figures I keep yammering about. The stories pair up neatly as for comparison and from examining them perhaps we see the differences between good and great.

“The Return of the Tide” by Kathleen Norris tells the story of an Irish family in New York. There are adult children – three daughters and a son. In the course of this long short story the son comes to terms with the death of his scion, the oldest daughter loses her husband in an unnecessary accident, and their mother, who has been wasting away, for some remarkable reason is energized by all this tragedy (which occurs at Christmas) and re-asserts her authority within the family. All of this somehow is supposed to bring us a happy ending of sorts, as Norris describes in her closing:

Life and death were hovering over her house, and the future was chaos, but the years had brought back the Callahan children to Ma’s guidance and Ma’s service and the heart of Agnes Callahan, little as she or any one else suspected it, was singing a song of gratitude and triumph within her breast.

In comparison Stephen Crane’s “A Dark-Brown Dog,” a tale as darkly naturalistic as anything that master of naturalism ever wrote, tells the story of a boy and his dog – a tenement boy and the dog he finds as a stray and takes back to his home where the creature is alternately petted and abused by the family. Finally, the boy’s father, in a drunken rage, throws the animal out a fifth story tenement window. In a scene that might have reached for pathos only to achieve bathos, Crane closes the story brilliantly with these sentences:

The dark-brown body crashed in a heap on the roof of a shed five stories below. From thence it rolled to the pavement below

The child in the room burst into a long dirge-like cry and toddled hastily out of the room. It took him a long time to reach the alley because his size compelled him to go downstairs backward, one step at a time, and holding with both hands to the step above.

When they came for him later, they found him seated by the body of his dark-brown friend.

The story by the author pictured above, Rupert Hughes’s “The Stick-in-the-Muds,” reaches higher than the Norris story, relying less on sentimental pathos for its effect. The story, which owes a noticeable debt to Sherwood Anderson, recounts the reflections of a successful businessman as he floats a punt down the Avon River past the graveyard where Shakespeare is buried. The narrator, in a meditation not unlike Thomas Gray’s, ponders why it is his childhood friend, a talented poet, failed while he succeeded. The flashbacks in the story make clear why this occurred: while the narrator had the advantages of a father who believed firmly in him, the poet’s father saw him as little more than free labor for his store. Hughes relates the poet’s tragedy this way:

[He} was a boy, a boy that still felt his life in every limb, a boy devoured with fantastic ambitions. He had a genius within that smothered and struggled til it all but perished unexpressed. It lived only enough to be an anguish.

Unfortunately, in the next sentence Hughes next compares the young poet’s stunted striving to an ingrown toenail. Knowing when to stop rhapsodizing is as important as knowing when to start. Nowhere is this unfortunate tendency to go a metaphor too far noticeable than in the story’s closing:

[The businessman] felt that it was a good, sad, mad world and that he had been very close to Shakespeare – so close that he had heard things that nobody had ever found the phrases for – things that cannot be said but only felt, and transmitted rather by experience than by expression from one proud worm in the mud to another.

This proud worm finds that phrase problematic. After evoking Shakespeare explicitly and Keats implicitly, Hughes gives us “one proud worm to another.” He’s right earlier in the passage – perhaps some things cannot be said….

That brings us to a somewhat more gifted writer, Leo Tolstoy, and a story called “The Long Exile.” It tells the story of a merchant who is framed for a murder he did not commit. After more than 20 years in a Siberian prison for a crime he did not commit, he finally comes face to face with the criminal who framed him, one Makar Semyonovich, whom he overhears confessing the crime to other inmates. Makar Semyonovich, who has been sent to prison for a lesser crime, threatens to kill Aksionov if he tells. Aksionov respond:

Aksionov trembled with anger as he looked at the enemy. He drew his hand away, saying, ‘I have no wish to escape, and you have no need to kill me; you killed me long ago! As to telling of you – I may do so or not as God directs.

Eventually, Makar Semyonovich, in a fit of remorse, confesses his deed first to the merchant, one Aksionov, then to the prison warden. The confession to Aksionov ends with redemption for both men:

‘God will forgive you,’ said [Aksionov]. ‘Perhaps I am a hundred times worse than you.’ And at these words his heart grew light and the longing for home left him. He no longer desired to leave the prison….

The reader realizes that there are in these speeches things which cannot be said, only felt. Where Hughes gives us rhapsody posing as insight, Tolstoy gives us a parable to teach us the same lesson: words can tell us only so much – experience tells us so much more, lessons for which there are no words, only feelings. Yet he does this – with words.

One proud worm, that Tolstoy.