Jose Saramago: Our Doppelgangers, Our Selves…

“Chaos is merely order waiting to be deciphered”
― José Saramago, The Double 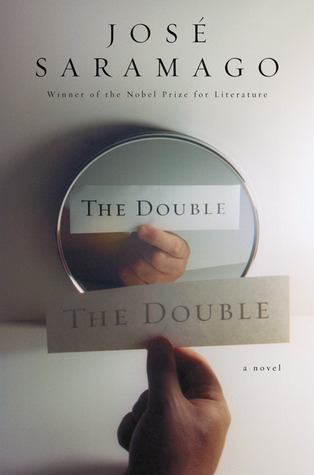 The use of doppelgangers in literature is a common enough  device. Edgar Allan Poe’s short story “William Wilson” and Joseph Conrad’s “The Secret Sharer” explore the idea of a double who shares an intimate relationship with the protagonist.  In novel form Dickens treats the idea in A Tale of Two Cities and Dostoevsky explores it in The Double. Of course the device has been given permutations, the most famous of which is likely Robert Louis Stevenson‘s The Strange Case of Dr. Jekyll and Mr. Hyde wherein the doppelganger idea is blended with an exploration of chemically induced multiple personality disorder.

The Portuguese Nobelist Jose Saramago (whose Baltasar and Blimunda I wrote about last year) offers a postmodern spin on the doppelganger. Saramago’s The Double is both a story of a man who accidentally encounters his human duplicate while watching a video and a meditation on identity, self-hood, and the power of language.

Tertuliano Maximo Afonso is a history teacher. He is divorced, depressed, and at loose ends in both his professional and personal lives. A well meaning friend, a mathematics teacher, recommends a film to him – as a diversion from his worries. The film, The Race is to the Swift, has a scene with a hotel receptionist that Afonso realizes is his exact twin. Afonso becomes obsessed with finding the actor. He watches a series of movies from the same production company trying to find out the name of his doppelganger. Finally, by chance, he finds the name and contact the actor (who uses the stage name Daniel Santa-Clara but whose real name is Antonio Claro). Through a long, overly discursive, narrative  Saramago finally brings Claro and Afonso together.  Their meeting sets in motion a series of events that ends in what can properly be called absurdist tragedy.

What Saramago is interested in in this novel is not this story. What he is really interested in is the vagaries of the imagination and the  power of words not simply to describe but to define existence:

We have an odd relationship with words. We learn a few when we are small, throughout our lives we collect others through education, conversation, our contact with books, and yet, in comparison, there are only a tiny number about whose meaning, sense, and denotation we would have absolutely no doubts, if one day, we were to ask ourselves seriously what they meant. Thus we affirm and deny, thus we convince and are convinced, thus we argue, deduce, and conclude, wandering fearlessly over the surface of concepts about which we only have the vaguest of ideas, and, despite the false air of confidence that we generally affect as we feel our way along the road in verbal darkness, we manage, more or less, to understand each other and even, sometimes, to find each other.

As for imagination, Saramago tries to explain what happens to our imaginations as we move through life following predetermined paths, adhering to the behaviors that prevent us from experiencing life’s possibilities:

We all know, however, that the enormous weight of tradition, habit, and custom that occupies the greater part of our brain bears down pitilessly on the more brilliant and innovative ideas of which the remaining part is capable, and although it is true that, in some cases, this weight can balance the excesses and extravagances of the imagination that would lead us God knows where were they given free rein, it is equally true that it often has a way of subtly submitting what we believed to be our free will to unconscious tropisms, like a plant that does not know why it will always have to lean toward the side from which the light comes.

The idea that we are not unique – that there is a duplicate of us somewhere – is antithetical to our notions of our – let me use a term that has been thrown around a lot in recent years – exceptionalism. Saramago suggests, however, something else: that no matter how many duplicates of us there are that we are, to those who love us, unique:

It was said that one of them, either the actor or the history teacher, was superfluous in this world, but you weren’t, you weren’t superfluous, there is no duplicate of you to come and replace you at your mother’s side, you were unique, just as every ordinary person is unique, truly unique.

The Double is, ultimately, a meditation – on who we are and, more importantly, on why we are.