Leiber and Stoller: Behind the Music

“…we were… part of the rhythm and blues and rock and roll revolution…. we found ourselves by sheer coincidence or exceptionally good fortune, smack dab in the middle of the action.” – Mike Stoller 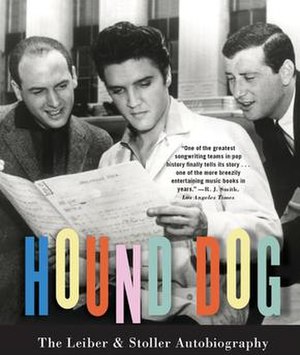 My Aunt Mary Ann, my mother’s youngest sister, was only eight years older than me. What that meant was that she was a teenager in the later 1950’s. Like any teenager of the period, she had a portable record player and a huge stack of 45’s. I spent every visit to my grandmother’s house when I was six-seven-eight listening to those records. I heard Little Richard, Chuck Berry, Jerry Lee Lewis, Duane Eddy, The Drifters, The Coasters, and, of course, Elvis.

I don’t know how many other kids my age were falling madly in love with rock and roll and rhythm and blues, But I did, and I’ve never fallen out.

So when a friend of mine surprised me with Hound Dog: The Leiber and Stoller Autobiography as a birthday present, it was like being that second grader all over again.

Less an autobiography and more a transcribed oral history, Jerry Leiber and Mike Stoller tell their story with a combination of verve, sentimentality, and humor that belies their status as two of the most important songwriters/record producers of the rock and roll era.  If the list of Leiber/Stoller songs reads like the Billboard chart for any given year from the early fifties through the late sixties, that’s because it kind of was. These are the guys who wrote some of the great “transition” songs that took rhythm and blues into the rock and roll era: “Kansas City,” “Riot in Cell Block #9,” “Smokey Joe’s Cafe,” and the most significant of all, a song they wrote for Big Mama Thornton that got picked up by the singer Jerry Leiber described to Mike Stoller as  “some white kid named Elvis Presley” named “Hound Dog.”

That song, which gives its name to this oral history, gave Leiber and Stoller mixed emotions. The version of the song that Elvis did was copied from from a Vegas act who parodied the song, and the lyrics which we all know so well – “You ain’t nothing but a hound dog/Cryin’ all the time/You ain’t never caught a rabbit/And you ain’t no friend of mine” are not even in the Leiber/Stoller composition. But as Jerry Leiber, the partnership’s lyricist notes, “…the fact that it sold more than seven million copies took the sting out what seemed to be a capricious change of lyrics.” He then adds, as if to defend his bona fides as an R&B aficionado, “But lick for lick, there’s no comparison between the Presley version and the Big Mama [Thornton] original. Elvis played with the song; Big Mama nailed it.”

The relationship between Presley and Leiber/Stoller yielded other gems before it was ruined by (who else?) Colonel Tom Parker, The King’s manipulative, crooked manager. But in that brief period of their connection Jerry and Mike wrote some classic Presley songs: “Love Me,” “Treat Me Nice,” “You’re so Square (Baby I Don’t Care),” “Don’t,” and the masterpiece, “Jailhouse Rock.” They also wrote what Elvis called “…a great goddamn Christmas song,” the fantastic “Santa Claus is Back in Town” and the title song for the Elvis film “King Creole.” Then their connection was severed by Parker and they wrote only one more song directly for Presley, “Just Tell Her Jim Said Hello.” The catalysts were two: they tried to get Elvis and the Colonel interested in a film project, a movie based on Nelson Algren’s novel A Walk on the Wild Side to be directed by Elia Kazan; then, too, they wouldn’t sign a blank contract indenturing themselves to the Colonel. Their reluctance to become pawns of Tom Parker proved the undoing of  the friendship with Elvis – a friendship reflected in Presley’s term for them: they were, he said, “his good luck charms.”

Losing Elvis was disappointing, of course, but Leiber and Stoller found compensations. Their love of R&B led to their relationship with The Coasters, a group that formed from the break up of one of the early R&B successes, The Robins, the group who recorded “Riot in Cell Block #9” and “Smokey Joe’s Cafe.” Leiber and Stoller wrote all the classic Coasters hits: “Yakety Yak,” “Charlie Brown,” “Along Came Jones,” “Young Blood,” “Little Egypt,” “Poison Ivy” and a favorite of mine, the proto-rap “Shopping for Clothes.” They wrote “There Goes my Baby” and, with Barry Mann and Cynthia Weill, “On Broadway” for The Drifters. They wrote “Love Potion #9” for The Clovers and co-wrote “Spanish Harlem” (with Phil Spector, whom they loathed) and “Stand by Me” (with the singer himself) for Ben E. King.

For Leiber and Stoller, as for all the original Brill Building songwriters, 1964 changed everything. But instead of resting on their laurels and giving way before the deluge of rock groups writing and playing their own material, the pair, fascinated by not only rock and roll but by jazz, particularly bebop, and cabaret music, turned their talent to writing for jazz artists. One of their later triumph’s was the 1969 smash for Peggy Lee, “Is That All There Is?” They even produced the first Stealer’s Wheel album – the great sounding “Stuck in the Middle with You” is an example of their production work. Eventually, they moved into consolidating music catalogs – their wise management of their own and other songwriters’ material made them very rich men.

Finally, Hound Dog: The Leiber and Stoller Autobiography offers readers some amazing anecdotes: Mike Stoller’s lucky escape from the Andrea Doria ship disaster; Jerry Leiber’s night of drinking – and nearly drag racing – with James Dean a couple of months before his death; Leiber and Stoller trying unsuccessfully to convince Marlene Dietrich to record their song “Is That All There Is?”

Jerry Leiber is gone now (he died in 2011), but Mike Stoller is still with us. And thankfully, we have Hound Dog – the story of one of pop music’s greatest songwriting teams told in their own words.

A few samples to show you the Leiber/Stoller magic: