The Love of Beach Music and the Heart of Darkness

“I didn’t like ‘Apples, Peaches, Pumpkin Pie….'” – Jay Proctor, Jay and the Techniques

So my sister gave me this book for my birthday…. 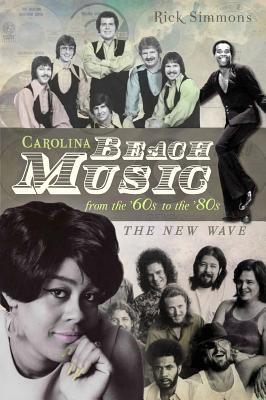 Somehow, my sister has the impression that I might like the fusion of R&B, soul, rock, and dance pop that is known in the Southeast as “Beach Music.” Well, I love music, so she was half right. For anyone who grew up in the Carolinas over the last 60 years or so (both North and South, though perhaps SC has the greater claim to the genre since they have all the relevant beaches name checked in beach music songs [chiefly Ocean Drive and Myrtle Beach]), Beach Music (and it really should be capitalized, I suppose), is a regional genre that, while well past its peak, persists even now. Its roots lie in classic R&B, though it has incorporated elements of rock, soul, and dance pop in its long history.

As those familiar with my blather know, I was a professional rock musician for some years before becoming the writer and professor I am now. In our touring days we often had to play beach clubs (they were everywhere, it seemed in those days of the early seventies). Audiences who showed up in their khaki pants, weejuns, and polo or madras button down shirts often didn’t know what to make of a band who played rock, and especially a band who played as much of their own material as they did covers. We learned to overcome this by playing a couple of Beach Music classics early in our show: “Under the Boardwalk” by the Drifters and “Hey, Baby” by Bruce Channel. That usually settled the crowd down (Beach Music fans are the equivalent of “yacht rock” fans in their love of their genre and their hatred of that which was not of their genre) and let us get on with their re-education concerning the power of power pop. We even had the occasional Beach Music fan who told us we were really good and could be great if we did more Beach Music numbers. I have never seen fans of any genre – metal heads, punks, hip hoppers – more fiercely loyal to their music.

So I approached this book with a certain degree of disdain and dread. I needn’t have. This is one of those “loving tribute” sorts of works that makes one wish one liked the music better. It’s part oral history, part encomium, part bullshit – but it all works.

Carolina Beach Music: The New Wave picks up where its predecessor, mentioned above, leaves off. After the triumph of rock in the sixties, Beach Music stood in grave danger of becoming an even more marginalized sub-genre of music than it already was. What rescued it – and allowed it to flourish for at least 30 more years – was a combination of two elements: its embracing of then new dance music forms (yes, I mean fucking disco) and a wave of songs written by its practitioners that celebrated – you’ve guessed already – Beach Music and its lifestyle: “Summertime’s Calling Me,” “Myrtle Beach Days,” “Carolina Girls,” and its anthem of anthems, “I Love Beach Music.” These are songs that examine what’s important in life: getting a tan, checking out the opposite sex on the beach, drinking beer, and doing that form of dancing peculiar to Beach Music, shagging.

While most of the musicians interviewed or discussed in the book are no-brainers (there are plenty of long time R&B artists including General Johnson who sings “Carolina Girls” and who is also vocalist on at least two other classics of the genre “39-21-40 Shape” and “Give Me Just a Little More Time“), there is the occasional head scratcher. For me, the most jarring of these is the inclusion of the Sanford-Townsend Band and their (only) hit “Smoke from a Distant Fire,” a song I rather like. I’d never associated the band, one hit wonders though they were, with Beach Music. After reading the story of the band and their song in Carolina Beach Music: The New Wave, however, their inclusion makes perfect sense – they were actually a beach music band from the Gulf Coast.

I guess that means I love Beach Music, too. What is it Kurtz said? Oh, yeah….