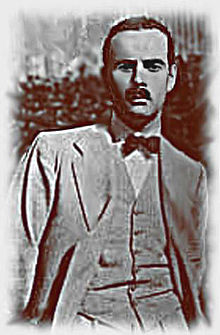 This week’s writer of slender acquaintance is less a mysterious one like Rhian Roberts and more a tragic one like – well, like many artists who oppose and are destroyed by repressive regimes. As I mentioned last week, I am meandering through a massive collection of short stories called A World of Great Stories. As I made my way through the Italian section (and came across one of the worst edited “story” selections I have read so far in this volume – and that’s saying something – an excerpt called “The Travelers” from Ignazio Silone’s The Seed Beneath the Snow), I encountered De Bosis and a piece (it’s not really a story, it’s a heartfelt autobiographical essay about and against Mussolini and Italian Fascism)  he wrote before his last flight (De Bosis was an amateur aviator).

The piece, called “The Story of my Death,” you can read by clicking the link above.

What makes De Bosis’s work resonant for any reader is that it is brave, heartfelt, and hopeful despite the circumstances in which he wrote. It is also resonant for me personally because I read it during a week when his descriptions of and arguments against fascism feel particularly apropos.

Fascism is a word being tossed about pretty often these days. Some of our more esteemed media outlets on both the left and the right seem to be convinced that one of our Presidential candidates is going to turn the country into a fascist state.

The role of artists in these tumultuous times has successfully been largely marginalized. Some of this has been driven by successful trivialization or starvation of the arts. And in an age of ever increasing scrutiny  and repression of activist behavior by governments around the world, perhaps many artists feel constrained to avoid confrontation.

Not so Lauro De Bosis. Faced with the repressive rule of Mussolini’s fascists, he penned an award winning verse drama Icaro, an anti-fascist allegory. (The play actually won a silver medal at the 1928 Olympic Games in the arts category back when the arts were considered part of the Olympic experience.) He also lived outside Italy much of the time between Mussolini’s ascent to power and the time of his death. A classics scholar, he taught Italian literature at Harvard and wrote poetry. Finally, however, his anger and dismay at what he believed Mussolini to be doing got the better of him. He formed an organization called Alleanza Nazionale (the National Alliance) and began distributing anti-fascist literature. Finally, in what he knew would be a grand gesture, he learned to fly so that he could scatter leaflets across Rome from the air denouncing Il Duce.

In order to disguise his intentions, he told the crew at the airport he left from that he was flying from Nice to Barcelona, a much shorter trip than his intended route, from Nice to Rome and then on to Corsica. His gas tanks were only partially filled as a result. His stunt was wildly successful – he dropped thousands of anti-fascist leaflets over the city center during crowded evening hours including dropping leaflets over the piazza where Mussolini was holding council meetings.

According to official accounts De Bosis got away before the Italian Air Force could scramble and respond. However, his fuel ran out and he crashed into the sea off the Corsican coast. There are claims that the Italian Air Force shot his plane down but these have never been confirmed. His body was never found. He was 29.

Before he took off, he left “The Story of my Death” with his companion, the actress Ruth Draper. I recommend it. As for me, I’m scouting around for a good English translation of Icaro.