The Judgment of Paris and the Rise of Impressionism…

“Time gives every human being his true value.” – Ernest Meissonier 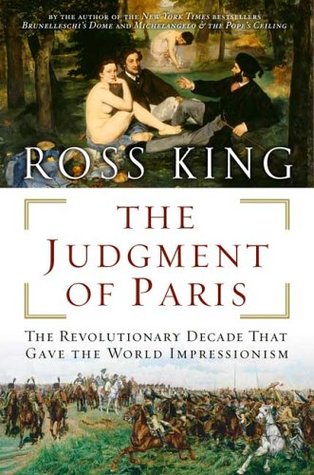 The Judgment of Paris by Ross King (image courtesy Goodreads)

Unless you are a student of art history, you have probably never heard of the author of the quote above, Ernest Meissonier. At the time of Ross King’s history of the rise of Impressionism, The Judgment of Paris, Meissonier was the most famous painter in the world. Now, 150 years later, Meissonier is forgotten and his rival who spent the decade being ridiculed, Edouard Manet, is one of art history’s titans. King’s book explores one of the most famous and volatile periods of art history, Paris in the 1860’s, the decade that saw the peak of Meissonier’s career, the decline and fall of the 2nd Empire, and the rise of a group of artists, a group King calls the “generation of 1863”- Manet, Whistler, Henri Fantin-Latour – and their younger contemporaries – Renoir, Degas, Monet.

By comparing the far different struggles of Meissonier and Manet, King is able to illuminate one of history’s continuing problems: the resistance of the established power structure to new ideas.

Meissonier is the epitome of the Establishment. He has made his reputation pleasing the powers-that-be, the school of artists trained at the Académie des Beaux Arts. Training at the Académie taught painters that art should show scenes of classical mythology or historical celebration. Meissonier specialized in this sort of work, especially scenes depicting that most historically significant of Frenchmen, Napoleon Bonaparte. Besides the epic “Friedland” (pictured above on the lower part of the book cover), Meissonier also gave us “Napoleon III at the Battle of Solferino” (pictured at right), a picture that both fit the criteria prized by the Académie and flattered Napoleon I’s nephew, the star crossed Napoleon III.

Edouard Manet stood in stark contrast to Meissonier. His chosen subjects – modern Parisian life, bohemian scenes, and updated re-envisionings of his favorite painter Velasquez – were mostly rejected by the Académie for its most prestigious and important show, the biennial Salon. His works that were selected, such as the now immortal “Olympia” (pictured at right) and “Dejeuner sur L’Herbe” (above at the top of the book cover) were objects of ridicule by both the Salon’s audiences and by most art critics of his time.

How and why the tastes of art critics, collectors, and the public changed is, King argues, because of an accumulation of causes: the collapse of the 2nd Empire after the humiliating defeat of France by Prussia in 1870; the nearly constant hammering at the French at establishment by one of the age’s most vociferous and powerful writers, Emile Zola; the embrace of the new by the French public as it found itself freed from its Napoleonic illusions. It came to embrace new art that reflected new understanding of human experience.

So Manet’s star rose and Meissonier’s declined. In the epilogue to the story, King notes that Manet’s paintings sell for many millions while Meissonier’s, while still of some value, sell for a tiny fraction of that amount. While the marketplace is an overrated measure of worth, the importance of Manet in our culture suggests that an old truism still holds its power: it is always more important to look forward than backward.