John Hairr’s North Carolina Rivers is part reference book, part history, part guidebook. What it is not is particularly engaging…. 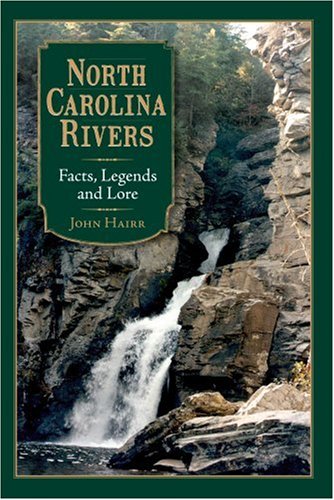 While I haven’t completed my book list for 2016, I will say a couple of things about it for those who have any interest in such things: it will be considerably shorter (12 books – to allow room for the numerous reviews I am asked to do and to allow me some writing time for completing my latest book), and it will focus on no particular area as the 2015 reading list did.

That said, we begin 2016 with a book I picked randomly from one of our many groaning bookshelves. In an effort to get away from my penchant for reading fiction, particularly literary fiction, I chose what I thought would be an interesting read for a dedicated fly angler: North Carolina Rivers: Facts, Legends, and Lore by John Hairr.

First, a digression into critical theory. In a classic text called The Reader, the Text, the Poem, Louise Rosenblatt describes two kinds of reading. She calls reading strictly for gaining information efferent reading to differentiate it from reading to appreciate the writer’s artistic (linguistic, syntactic) choices, the work’s structure, and the effect of the reading experience on the reader, a type of reading she calls aesthetic reading.

How does this bit of intellectual arcanum relate to North Carolina Rivers? Well, as I mentioned above, Hairr tries to make his book serve a number of purposes. What is problematic is that these purposes do not mesh particularly well. For example, here’s a typical description of a river that flows into one of North Carolina’s largest drainage, the Cape Fear River system:

Rocky river rises at the town of Liberty in Randolph County and flows southeast into Chatham [County]. It flows by Siler City and continues to a point northeast of the community of Cumnock, where it enters Deep River.

The area through which the Rocky flows in Chatham was renowned for its mineral resources. There were a number of mines in production here in the late 1800’s.

Here we have an example of good efferent reading. We gain a good deal of information (some of it interesting as NC history), but one is not likely to savor the writing’s artistic powers.

Near the end of North Carolina Rivers Hairr tells the poignant story of the colonial capital of Onslow County on the NC coast. The reading experience shifts from the purely efferent to the aesthetic as the historian warms to his subject:

Downstream from the bustling town of Jacksonville, a quiet point of land jutting out into the New River stands as a mute testimony to the awesome power of nature. Here once stood the old town of Johnston, whose short existence was brought to an abrupt end during one of the most violent hurricanes ever recorded along the North Carolina Coast.

Granted, this isn’t Nick Carraway recalling Jay Gatsby’s party guests, but in a book filled with writing like that quoted in the above passage, it jumps out at the reader, even jars him/her with its aesthetic appeal.  One ends up wondering why Hairr chose to include so few passages of this nature (there are a couple of others including one about the escape of an NC patriot from Tories during the Revolutionary War) to engage the reader in this more artistic way. One wishes, of course, after over 150 pages of sentences such as “Perquimans River rises in the northern part of the county with the same name” that Hairr had allowed himself to offer more of this engaging historical information told with the relish he shows in the passage noted above.

Alas, he does not.  So North Carolina Rivers, while well researched and informative, struggles to engage the reader. That’s a shame, for it is a valuable book for anyone interested in exploring the varied and exciting rivers of the Old North State.