Ron Rash’s Saints at the River has at its center a powerful story about the struggle of Southern mountain subculture  to reconcile itself with the “greater” culture…. 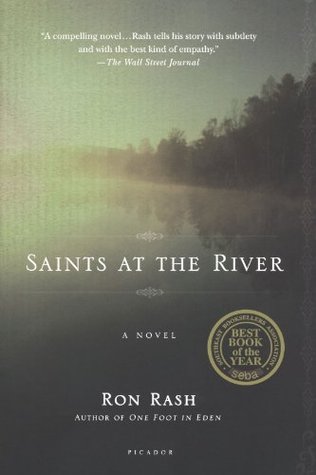 Saints at the River by Ron Rash (image courtesy Goodreads)

Ron Rash’s novel Saints at the River has been widely acclaimed as a novel of power and insight in its depiction of Southern mountain culture. It is certainly that. Rash’s tale of a child drowned in a wild mountain river and the struggle over the rights of parents to retrieve the child’s body from the river while protecting the river’s environmental (and historical) significance has moments of resonance for any reader aware of the struggle between homogenization and cultural diversity.

But the novel has, alas, some real limitations, too. The ancillary plot lines (mountain reared news photographer daughter alienated from father, newspaper reporter struggling to write story about drowned girl due to reminders of his own daughter’s death, budding romance between reporter and photographer complicated by both characters’ pasts) are, despite Rash’s efforts to give them more than average depth, average and predictable.

Saints at the River is, then, at best a flawed effort. The question then become, do its strengths outweigh its weaknesses?

Stylistically, Rash is a realist who practices what the Greensboro News & Record “traditional, straightforward storytelling.” His knowledge of the Appalachian mountains is extensive and gives his descriptions of the northwest South Carolina mountains heft. He develops characters, too, with patience and detail. An Atlanta Journal-Constitution reviewer claims that Rash’s style is “akin to that of hard-boiled detective novels,” a claim I find laughable, as will any reader who has read Chandler, Cain, Spillane, or MacDonald. What Rash does, and does well, is tell a complicated story in a deceptively simple way.

And perhaps this is the problem with Saints at the River. There are moments when Rash’s straightforward style serves him admirably, as in this description by the novel’s hardcore environmentalist of why the river’s integrity should not be disturbed – even to recover the body of a drowned girl to give her parents closure:

…the girl’s body is the Tamassee’s now…the moment she stepped in the shallows she accepted the river on its own terms. That’s what the wilderness is – nature on its own terms, not ours, and there’s no middle ground. It either is or it isn’t.

One wants more of these types of moments.

There’s also that problem with predictability. As noted above, the secondary plot lines disappoint, mostly because they are predictable. The father-daughter relationship narrative, brought to crisis as it is by the father’s terminal cancer, is resolved with the daughter putting aside her own issues and tending her parent through his last days. The tentative relationship between the reporter and the photographer, fraught as it clearly is with goodwill and missteps, remains in its tentative state, events intervening as one expects they will continue to do.  Despite some good writing by Rash, these plot developments can be foreseen so easily that they feel – irrelevant.

The most egregious example of this predictability, though, comes near the novel’s end during the first attempt to recover the child’s body. Twin brothers, mountain locals (the photographer knows them) are rescue divers. One of the brothers, in a scene reminiscent of a TV movie, sacrifices his life needlessly trying to recover the body because, as he tells his twin, he’s “got to,” i.e. it’s the right thing to do®. It’s the weakest moment in the novel: one feels no real pathos in the moment because it seems so contrived and predictable.

The novel’s climax, wherein the surviving twin uses an old mountaineer trick to recover the bodies of both the drowned girl and his brother, also has a cinematic quality. It also has both believability and a sense of both inevitability and surprise – qualities lacking in the scene described above – and brings the work a rich sort of closure. It is almost enough to make one forget the problems mentioned above and think of Rash’s work as a great novel. Almost.

Maybe that’s how best to describe Saints at the River: it’s almost a great book.