Southerners have trouble ruling out the possible. What happens to a man to whom all things seem possible and every course of action open? Nothing of course…. 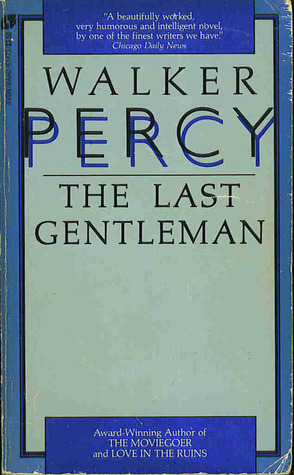 At long last the time has come to talk about Walker Percy’s The Last Gentleman both on its own merits as a great Southern novel and in relation to my novel The New Southern Gentleman and about Percy’s influence on both me and on that novel.

As promised, let me talk first about my relationship with Mr. Percy. In 1984 I was a doctoral student completing a creative dissertation which became (several years later) the novel mentioned above. I was in contact with an editor at one of the major publishing houses in New York who liked my work and kept pushing me to write something/anything that would please the new masters of publishing, the corporate entities who were swallowing up the old family owned publishing houses left and right and for whose decision making power they had shifted from editors to marketing departments. He liked my manuscript, but he figured it would not fly with marketing (he was right; the novel only appeared years later from a small, independent litfic house in California). Because of the similarity in the title of my work and the title of Mr. Percy’s masterpiece, he wrote to me and suggested I write to Walker Percy.

“Right,” I replied. “Walker Percy is going to take the time to correspond with me, a nobody grad student and advise me about a novel that is probably never going to get published.” (Even then I had the same sanguine feelings for the mainstream publishing industry that I still hold.)

“Yes, he will,” replied my editor friend. “I’ve already written him to ask for his help.” Turns out my editor friend knew Percy. So he passed along Mr. Percy’s personal address and I wrote him a very tentative and suitably Southern and courtly letter.

Lo and behold a couple of weeks later he replied. I do remember standing by the mailbox, looking at that letter, and thinking, “Walker Percy wrote me a letter.” I must say, at that moment I felt as if I were somebody. In a good way.

His missive was brief, but it was the beginning of a short correspondence between Jim Booth, Southern writer and Walker Percy, Southern writer. I asked him some questions about my novel (turns out my editor friend had sent him a few chapters and he’d actually read them) and, in a coals-to-Newcastle gesture, expressed my admiration for The Last Gentleman. He gave me advice, some of which I used, some of which I didn’t, all of which I treasured. I found him a kind, thoughtful person and a reader of, as one might expect, sensitivity and insight. The correspondence ended because his health was already failing (the cancer which was to kill him a few years later was already present) and he told me simply and honestly that he hadn’t the physical or intellectual energy to continue mentoring me. I sent him a last brief note to thank him for his kindness and that was the end of our relationship.

I no longer have Mr. Percy’s letters. They were thrown out by an ex-spouse who explained, “I thought you didn’t want them.” I think no more need be said here for the reader to infer much about the problematic nature of human relationships.

The first area to consider is family. We sense from the beginning of the novel that Will Barrett is a lonely soul. His parents are dead, and, worse yet (tongue in cheek here), he is living not in the Mississippi Delta of his upbringing but in New York City working as a maintenance engineer at Macy’s. His love affair with NYC is the result of his education. Like many a good Southerner, he has attended the Ivy League school of choice for those from Dixie, Princeton. His romance with New York has not been a happy affair, however; Barrett’s dislocation has caused him severe neurosis; when we first meet him he is in analysis. But then his quixotic purchase of a telescope leads to his sighting of a lovely young woman who turns out to be an Alabama belle from a wealthy, dysfunctional family. His subsequent involvement with both the belle, named Kitty, and her family, the Vaughts, is the catalyst for the novel’s action. Having no family, Will Barrett has to learn how to be part of a family – and to remember that the Vaught family like many a family is, as Tolstoy reminds us, “unhappy in in its own way.”

The Vaughts’ youngest son, Jamie, is in a New York hospital being treated for leukemia. In his pursuit of Kitty, Will Barrett ends up at the hospital. The family patriarch and his wife offer Will the job of acting as companion and caretaker to Jamie. At this point the novel becomes a mini- picaresque as Will wanders from New York to Pennsylvania to South Carolina to Georgia and finally to the Vaught home in Alabama in pursuit of Kitty and her ex sister-in-law Rita who is determined to keep Will and Kitty apart. Kitty, Will, and Jamie enroll at the University of Alabama as the Vaught family settles into their home. At the Vaught home Barrett meets the other two Vaught children, the lascivious and suicidal physician Sutter and the religious ideologue Val. In coming to terms with Val’s and Sutter’s attempts to force him to accept, on the one hand Val’s proselytizing and on the other Sutter’s theory of concupiscence as immanence, Will Barrett considers and comes to terms with his own religious needs – or lack of them.

Eventually, Sutter and Jamie run away to Rita’s place in New Mexico, Jamie to get away from his impending death, Sutter to try to get away from his impending life. Barrett follows, only to find Jamie dying of complications from a strep infection and Sutter seemingly determined on suicide. His ability to take not only Jamie but especially Sutter into his charge at the end of the novel makes its ending less ambiguous than some readers might think. He acts as a Southerner with what Henry Adams once called “the habit of command”  – but also as a Southerner, he acts as one whom Adams also wryly observed “had no mind.”

Much can and should be made – by scholars, not by me in this essay – of Barrett’s memory issues, of his desire to look at things from a distance (hence the telescope purchase), of his unresolved issues about himself and the place he sprang from. The Last Gentleman is a novel of ideas, and Percy spends  much time on what it means to be Southern, and how Southern concepts of chivalry, religious devotion, and continuance of tradition make Southerners psychological prisoners who, though they may physically leave the South never really leave it mentally. Barrett recognizes this in one of his first encounters with the Southern temperament in Wilmington – or Charleston – or, as Percy reminds us, anywhere in the region. A joke with a storekeeper becomes an elaborate social ritual that codifies where he is…

…in the complex Southern tactic of assaying a sort of running start, a joke before the joke, ten assumptions shared and a common stance of rhetoric and a whole set of special ironies and opposites. He was home.

Later, during his brief sojourn at the University of Alabama, he recognizes that special species of anti-intellectualism that the South has perfected:

And finally, Percy gets at what always haunts Southerners most and most effectively: history…

It was if the memory of this gentler age had dispensed Mrs. Vaught from the terrible quarrels [civil rights struggles] of the present….For him [Barrett] it was the other way around! It was the olden time with its sweetness and its great occasions which struck a dread to his heart! It was past fathoming….

I mentioned above that The Last Gentleman ends, some might argue, ambiguously. Sutter Vaught seems to be on his way to his (and Rita’s) ranch to commit suicide. But Barrett stops him. Stops him with a single word:

“Wait,” he shouted in a dead run. [He is chasing Sutter’s car, an Edsel, a vehicle whose history as a bad idea gone wrong is analogous to that of the Confederacy.]

The Edsel paused, sighed, and stopped.

Barrett goes to the car and gets in with Sutter and we can sense that by getting Sutter to stop he has prevented his soon to be brother-in-law’s suicide. Barrett has proven himself courageous, independent, reliable. He is his own man – a strong but gentle man. That, Percy suggests, is what being a gentleman is.