Reading Christopher Moore’s Fool is rather like watching Hercules: the Legendary Journeys or  or Xena: Warrior Princess; that willing suspension of disbelief Coleridge was on about is absolutely necessary. 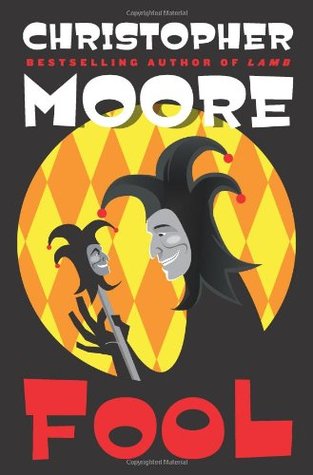 some time. Fool is author Christopher Moore‘s mashup of Shakespeare whose primary focus is answering the never asked question: what would King Lear be like if told from the point of view of Lear’s Fool? Moore’s answer to this question would be a story filled with lots of bawdy, occasionally tasteless, joking about power, sex, treason, madness, and love –  all Shakespearean topics, granted – as well as love as a higher end of human endeavor – another Shakespearean theme.

Fool is told, as I mentioned, from the point of view of Lear’s fool, named Pocket in Moore’s novel. Pocket has an apprentice named Drool, a hulking character with a weak mind, a strong back, and an enormous sexual capacity (both in desire and in capability). The other characters are straight from Shakespeare’s play(s): Lear, his daughters and their husbands, Kent, Gloucester and his sons from Lear. Also appearing are the three witches from Macbeth and an anchoress named Thalia who, both as a woman (a nod to Julian of Norwich?) and as a ghost (certainly a nod to Hamlet) provide guidance to Pocket. Of course the guidance is duplicitous  in the case of the witches (as in Macbeth) and difficult to interpret at first in the case of the ghost (as in Hamlet).

This is not to say that Fool is a bad book. It is not. It is well written, amusing, bawdy. Probably for some readers it is laugh out loud funny (I only did so once, but your experience may vary). And Moore clearly does a nice job of both incorporating Shakespeare (the most notable quotes from the book are lines from Shakespeare himself; Moore’s Pocket is given mainly to humor of the scatological and sexual sort that is breezy but not particularly memorable) and of offering a plot twist or two (one I’ll give away: Cordelia doesn’t die – it’s a comedy, after all).

But, and here’s where my bias takes over, my considered opinion is that Fool is a slight book. I came to Fool having just read a work by Carson McCullers, and I am now engrossed in a novel by Walker Percy. One would think that in reading a work like Fool, sandwiched between works by two serieux literary heavyweights, I’d find that Moore’s novel would offer a lively, thought provoking comedic turn. Instead, what Fool offered was a lot of “shagging, vulgarity, and split infinitives” as the novelist proudly alerts us in his brief preface. It was diverting – but only that.

Perhaps diverting is enough in our current culture. There certainly are enough examples of what’s embraced as art – and what passes for cultural critique – around us to suggest that a sea change has occurred and that maybe diversion is all that can be expected – and accepted.