Yukio Mishima and the Struggle to be Free…

“…I must point out that a memory which is suddenly revived carries a great power of resuscitation. The past does not only draw us back to the past. There are certain memories of the past that have strong steel springs and, when we who live in the present touch them, they are suddenly stretched taut and then they propel us into the future.” Yukio Mishima, The Temple of the Golden Pavilion 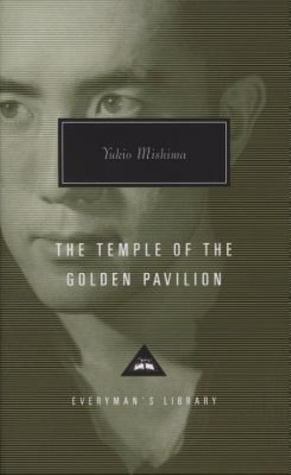 Sometimes one reads an author who makes one wonder what the hell the Nobel committee thinks about when it selects prize winners for literature. I had read some Yukio Mishima many years ago, during my undergraduate days, actually (Nixon was POTUS which should give you some idea of how long ago that was). Mishima’s strange death sparked my interest (I remember reading an article about him and his bizarre ending from, of all places, Life magazine at my parents’ home), so I had been on the lookout for one of his works. I ran into a used copy of his story collection Death in Midsummer and Other Stories  and remember thinking, in my idiosyncratic way, that the title story reminded me of Salinger’s “A Perfect Day for Bananafish.” In fact, the collection resonates with the same sort of angst, alienation, and anger at the world/life/what ya got that pervades Salinger’s collection Nine Stories.

That same angst, alienation, and anger pervades The Temple of the Golden Pavilion, one of the richest, finest novels a reader will find anywhere in literature. Reading such a powerful work makes one wonder how the Nobel committee ignored Mishima even as they rewarded his friend and mentor Yasunari Kawabata.  The answer to that question is like the answer to another question about the non-rewarding of literature’s most well-known prize that I asked last year: likely political in nature.

Mishima’s extremist politics, like those of Peter Handke, referenced above, probably had more influence on his perception by the Nobel committee than any of his work. His imperialist militarism (a strange adoption – and one he vehemently denied despite much evidence to the contrary – for one who waited to be drafted into the Japanese army during WWII and then failed his physical exam because a severe chest cold was misdiagnosed as tuberculosis) have made him at points an almost mystical hero and a laughingstock in his own country. His novels, most especially The Temple of the Golden Pavilion, question Japanese identity at its deepest core. Such a controversial and enigmatic figure is not the sort that the Nobel committee regularly rewards. Hence Mishima’s failure to win the award despite three nominations. Like the later Handke, Mishima does not seek to “elevate” the human condition so much as to palpate it, probe it, dissect it. Too, his works are deeply philosophical (and psychological) in nature, tendencies that the Nobel committee has not necessarily appreciated (or understood, one can only conclude).

That said, The Temple of the Golden Pavilion is a work of profound depth that explores Japanese religion and philosophy by exploring where the junctures of religious enlightenment and neurotic psychopathy intersect.  The protagonist, a self-described “ugly” young man named Mizoguchi, whose father is a Zen priest (of the Renzai school – an important detail because of that school of Zen’s history of violence as a teaching tool) and who is sent to the Temple of the Golden Pavilion, one of Japan’s most famous and beautiful Buddhist temples as an acolyte and apprentice to be trained for Zen priesthood himself. A stutterer who is painfully insecure with both makes and females, Mizoguchi develops a neurotic fixation for the temple itself, endowing it with all his love and appreciation for beauty. His own ambitions, he reveals, are painfully,  modest:

I had no particular impulse to outshine others by cultivating some new ability and by thus making up for for those points in which I was inferior. In other words, I was too proud to be an artist. My dream of being a tyrant or a great artist never went beyond the stage of being a dream, and I did not have the slightest feeling of wanting to accomplish something by actually putting my hands to it.

Mizoguchi eventually finds himself torn between two friends, one of whom, Tsurukawa, has befriended Mizoguchi despite his efforts to keep him at arm’s length; the other, Kashiwagi, Mizoguchi has befriended because of the young man’s disability (club feet) which Mizoguchi seems to feel makes them kindred spirits given his own stuttering problem. Tsurukawa is a gentle, kind soul who models for Mizoguchi the compassion so central to Zen. Kashiwagi is a self-possessed, though deeply bitter, spirit who nevertheless seems to have attained enlightenment, the primary goal of Zen study. The neuroses that eat at Mizoguchi – his insecurity with women, his latent homosexual tendencies, his neurotic fixation on the Temple of the Golden Pavilion as the essence of what beauty can be in the world – are alternately triggered and/or sated by his relationships with these two figures. He longs for both the kind, accepting serenity of Tsurukawa and the ruthless, amoral drive of Kashiwagi. These relationships take on the allegorical qualities of the struggle for self-understanding (and hence enlightenment) that Zen study attempts to achieve. Mizoguchi teeters between the poles of these world views, a lost seeker for something that he discovers ultimately that neither possesses – or can give him. Mizoguchi recognizes this about each of these friends who represent opposing roads to enlightenment:

My own life possessed no such firm symbolism as Tsurukawa. …what I envied most about him was that he managed to reach the end of his life without the slightest conscience of being burdened with a special individuality or sense of mission like mine.

‘If my life is to be like Kashiwagi’s, protect me. For I do not think that I could possibly bear it.’ Such was the prayer that I almost uttered as I stood there facing the temple.

But the struggle between light and dark, between acceptance and rejection, between Tsurukawa and Kashiwagi continues within Mizoguchi:

It is said that the essence of Zen is the absence of all particularities, and that the real power to see consists in the knowledge that one’s own heart possesses neither form nor feature…a person like Tsurukawa…emitted brightness by the mere fact of his presence….My own life possessed no such firm symbolism as Tsurukawa’s

In the end, it is almost by chance that Mizoguchi makes a choice. Though his choice seems to favor one view, his decision is almost an expression of Zen:

Abruptly I remembered what Kashiwagi had said to me on the day that we first met. It is when one is sitting on a well-mowed lawn on a beautiful spring afternoon…it is at such time that cruelty suddenly springs up within us….Was the notion that now occurred to me a cruel notion in Kashiwagi’s sense of the word? I do not know…. I still did not try to think it out deeply, but was merely seized by the notion…. ‘I must set fire to the Golden Temple.’

Once he has decided on this course, Mishima slows the novel down in a remarkable display of writing virtuosity. The effect is as if we are experiencing the psychological phenomenon of time slowing down. Mizoguchi meticulously plans his action and even buys poison and a knife to make his own death part of his act. Not only are we made privy to his plans, we are made privy to the convoluted logic that motivates his act:

At the moment for the act to be done, however, Mizoguchi remembers yet another idea from Kashiwagi that makes him hesitate:

But then, in sublime irony, Mizoguchi’s Zen training propels him to the deed:

And so Mizoguchi burns the Temple of the Golden Pavilion. For a brief moment after he has set fire to the temple, he considers allowing himself to burn with the object of his obsession. But then a kind of panic sets in and he runs away up onto a mountainside above the temple. From there he looks down at the conflagration and realizes that he has reached an enlightenment. He takes the poison and knife from his pocket and throws them away. The novel ends with lines reminiscent of a Zen saying:

I felt like a man who settles down for a smoke after finishing a job of work. I wanted to live.

Beauty is nothingness. Freedom is resignation. Zen is Zen.

2 Responses to Yukio Mishima and the Struggle to be Free…