Jose Saramago: Baltasar, Blimunda, and The Flight to Happiness

“…the longer you live the more you will realize that the world is like a great shadow pervading our hearts. That is why the world seems so empty and eventually becomes unbearable.” – José Saramago, Baltasar and Blimunda 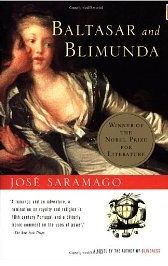 After taking longer than I should have (and mewling and puking about it in the process) I have finished Portuguese Nobelist José  Saramago’s masterful Baltasar and Blimunda from the 2015 reading list. It’s a powerful novel as both a tale of the mystery of love and as a novel of ideas. Saramago’s genius is his ability to wed these very disparate sorts of stories (romance, political statement). Saramago’s gift to readers is that he does both of these in a subtle, even elliptical way, introducing themes, spinning them out, spinning away from them, then gradually winding us back to them when we have all but forgotten them. Like a Scarlatti sonata, Baltasar and Blimunda is part entertainment, part education, and part expression of the artist’s view of the world.

More about the power of the imagination to do both good and evil than any other theme, Baltasar and Blimunda asks us to consider why we allow others’ ideas to control our destinies….

The plot of Baltasar and Blimunda is, like life, both simple and complex at once. Set in Lisbon, Mafra, and other points in Portugal between 1711 and 1739, the twin story lines explore the life and actions of King Joäo V, the country’s absolute monarch, and the lives and actions of those affected by the king’s actions: his chaplain, Bartolomeu Lourenço de Gusmäo, learned doctor of canon law, inventor, and eventual heretic; Baltasar Sete-Sois, a former soldier of King Joäo’s army who has lost his left hand in battle and been given two replacements for his loss – a hook for work and a spike for defense; and Blimunda Sete-Luas, the beautiful daughter of a heretic sent into exile in Angola by the Inquisition who has the gift of seeing into people.

The action of the novel divides into two sets of activities: the building of a huge convent in Baltasar’s home town of Mafra, commissioned by King Joäo V as a thanks for the birth of his daughter, the Infanta Maria Bárbara, an undertaking that allows Saramago to detail the unfairness, brutality, and wastefulness of government by monarchical whim; and the building of an airship, called a passarola, by Baltasar and Blimunda under the direction of Padre Bartolomeu Lourenço. The airship is constructed in secret with only three persons involved initially. Later a fourth person, the composer Domenico Scarlatti, learns about the airship from Padre Bartolomeu Lourenço and visits the work site, an estate taken by the crown from a disloyal nobleman, but Scarlatti’s contribution is to have a harpsichord transported to the estate where he plays music for them – and himself. The convent takes nearly two decades to “complete” (it is not complete when it is consecrated, but it has been declared completed by King Joäo V, so it must be so for his decisions are absolute). The airship takes far less time, perhaps a quarter of the time of the convent. Of human resources and construction materials, of course, the airship’s demands are infinitesimal in comparison to the building of a vast convent with attached church, chapels, dormitories, classrooms, and offices. This begs a comparison: the airship is the dream of a man who would try to reach God; the convent is the dream of a man who would try to be God. Saramago doesn’t take sides. He leaves it to the reader to decide which, if either, of these dreams is worthwhile – or worthy.

At the same time that Baltasar and Blimunda are working on his airship, Padre Bartolomeu Lourenço is completing his doctoral studies and researching the question of how to power the airship. In the former matter, he eventually reaches the conclusion that God is one and one only; the leads him to the heresy of embracing Judaism so as to embrace the singular God of Abraham and David. In the latter he discovers while studying in Holland that what can make the airship go is human will. He gives Blimunda Sete-Luas a set of globes with amber in them. Using her power of seeing into people, she is able to gather wills from over a thousand persons (taking of the will, Saramago, via Padre Bartolomeu, is careful to explain, is not taking of the soul – and Blimunda’s methodology for gathering of wills is a little like an 18th century version of the incarceration of spirits in Ghostbusters). Finally, in one of the novel’s three climaxes, Padre Bartolomeu, Baltasar, and Blimunda fly away in La Passarola, powered by the globes full of human will, the padre to escape officers of the Inquisition who are pursuing him because he has too clearly illuminated his heretical secret via a sermon, the other two because – well, because they love each other and do everything they can together. They fly over Portugal for awhile, then land, a little roughly, on the side of a mountain. Dazed from their soft crash landing – and his troubles – Padre Bartolomeu disappears into the brush. Baltasar and Blimunda do not know what has become of him until official word arrives that he had fled to Spain and died there of unspecified causes about a year after their flight.

That magical part – sort of – of their lives over. Baltasar and Blimunda return to Mafra where they take up residence in the family homestead with Baltasar’s father, sister, her husband, and their son, Baltasar and Blimunda’s nephew. Baltasar then joins the other great project, working on King Joäo’s convent. Periodically he goes to check on the flying machine, keeping it repaired. Sometimes Blimunda accompanies him, sometimes not. In the second climax of the novel, on the day before King Joäo is to arrive for the consecration of his monument to his daughter and himself, Baltasar goes alone. As he is checking the wooden decking in the airship, a board breaks and he is left dangling by his hook from the rigging. His weight causes the passarola to shift, its wings expand, and he is taken into the air with no way to stop or control the ship.

When he does not return, Blimunda eventually goes in search of him. Her search is unsuccessful, and she even kills a friar who tries to rape her. Eventually she wanders the whole of Portugal searching for the man she loves only to find him in the third and final climax of the novel: arriving in Lisbon on the day of an auto-da-fe, she recognizes one of those being burned at the stake is her Baltasar. Just as he is about to be immolated, she gathers his will.

Even this does not cover all the action, explain Saramago’s occasional meta-textual commentary, or explore the ideas of the importance of human dignity, the need for freedom from tyranny, and the power of love and the human will that this novel explores. That might be best done by quoting this master of human insight. Here he describes how true love defies the ravages of time and age:

This aging couple [Baltasar and Blimunda] are the scandal of the town of Mafra as they hug each other in the public square…poor deluded creatures… perhaps they are the only two human beings who see themselves as they really are, which is the most difficult thing of all….

Here Saramago enters the novel to remind us of how complex and often inexplicable this matter called life can be:

Everything in this world can volunteer some reply. What takes up time is posing the questions.

…death comes before life. Who we were has died, who we are is being born, and that is why we do not die all at once.

Finally he explains that – be it life, love, or art – we pursue, after all, an ever elusive quarry:

Who can tell what these two perceive, or what new intrigues they are preparing. Perhaps it will all turn out to be illusory, the fruit of a certain time and a certain place, for we know that happiness is short-lived, that we fail to cherish it when it is within our grasp and value it only when it has vanished forever.

Heartbreaking? Yes. True? Also yes. That is why this bears repeating:

…the longer you live the more you will realize that the world is like a great shadow pervading our hearts. That is why the world seems so empty and eventually becomes unbearable.

Whether a queen, as the speaker of these words is, or a peasant girl whose mother was a heretic as Blimunda is, the problem remains the same. José Saramago’s Baltasar and Blimunda reminds us that, to paraphrase a legendary exit line, dying is easy; happiness is hard.

4 Responses to Jose Saramago: Baltasar, Blimunda, and The Flight to Happiness