R.K. Narayan’s Under the Banyan Tree is really a collection of sketches rather than short stories that bring to readers the daily life of the India of his time. They are often clever and always charming; still, from such an obvious talent, one wishes for more than one gets here. 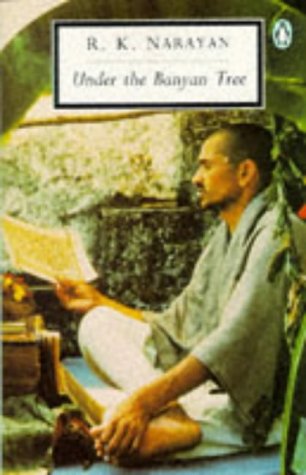 Under the Banyan Tree by R.K. Narayan (image courtesy Goodreads)

I stumbled upon this collection by Indian author R.K. Narayan in my favorite used bookstore last fall and picked it up for my 2015 reading list segment on  world literature. This is one of those rare instances where I have come across an author and realized I had no recollection of ever reading any of his work. Given his status as one of India’s most respected authors of the 20th century and a multiple time Nobel nominee, he seemed a natural for my reading list. As with another writer new to me, Yasunari Kawabata, I expected great things. Kawabata did not disappoint.

After reading Under the Banyan Tree, I won’t say that Narayan disappointed me, but I do believe I will have to go further into his oeuvre to discover the writer who won so much praise. While the pieces in this volume are full of charm and turn a clear eye on the character of Indian daily life, they are mainly character sketches rather than stories.

One confession before I move into the discussion of Narayan’s book. At the time I picked up Under the Banyan Tree, because I knew so little about Narayan, I didn’t know he wrote in English. I’m not sure that this disqualifies him as a “world literature” writer; however, it certainly qualifies his work in a way that separates him from other authors I’ve written about who are at the mercy of translators (Sigrid Undset is a good example of an author who has benefitted from an excellent updated translation). And Narayan was “discovered,” in a sense by Graham Greene (a friend of Narayan’s at Oxford showed Greene the manuscript  of his first novel and Greene helped Narayan get published). Narayan’s subject matter, though, is Indian society and culture, about which he writes thoughtfully, even wisely. So while he writes in the language of the Raj, his insights are those of his own country as seen by one of its own.

There are 28 pieces in Under the Banyan Tree, most of them so brief that the term I used earlier, sketch, is more descriptive than short story. The best of these “sketch stories” is “The Watchman,” a brief tale of a village watchman and a young girl whose life he saves. Narayan, like the masters of short fiction he clearly admires (certainly De Maupassant and Saki, though one also feels the presence of Chekov and O. Henry at times), is able to distill incidences into their essences as well as any of those mentioned writers ( he is especially like De Maupassant and Saki in his brevity, like Chekov and O. Henry in his love of the alternation of humor and pathos, and like all of these in his affection for the twist ending).

In his longer stories, however, Narayan sometimes runs into what I’d call a “wheel spinning” problem. Two stories provide good examples of how in one case he overcomes this and how in another case he doesn’t.

“A Horse and Two Goats” concerns a poor elderly shepherd who has fallen on hard times and lost his flocks – except for the two goats of the story’s title. He is struggling with the problem of trying to find enough money to buy even the rudiments of his evening meal (at this point usually the only meal he gets each day) when an American tourist comes upon him and offers to buy a statue (the horse of the title) that was once part of his village but has now been forgotten as the village has shifted boundaries. In an exchange that is humorous and charming while at the same time a keen examination of cross cultural miscommunication,  the shepherd sells the statue for what seems a princely sum thinking that he is selling his last two goats. The kicker (and of course there is a twist, see above) is that when he comes home – and discovers that the goats he thought were sold are still his – is that the shepherd’s wife naturally assumes he’s been up to no good, a logical conclusion given that he’s possessed of more money than he might obtain in a year and offers an explanation for it that seems preposterous on the face of it:

Hi wife glared at him and declared, “If you have thieved, the police will come tonight and break your bones. Don’t involve me. I will go away to my parents….”

Given that both shepherd and wife are well past 70, her threat is more comic than dire. The shepherd, however, is more bemused than anything else. And he still doesn’t know what exactly happened – so he lectures his goats on having abandoned their new owner.

“Annamalie” is the second example – and it demonstrates that wheel spinning problem that Narayan gets into in longer stories. The story is really a character sketch of the narrator’s gardener, an eccentric figure whose name gives the story its title. He gets his position as gardener in the way that he gets through one event after another in the story – partly by bluff, partly by simply ignoring the real situation and doing as his whimsical personality dictates. The narrator is a writer (a recurring figure in Narayan’s fiction) and his musings on the eccentricities of Annamalie his gardener form the bulk of the story – and therein lies the problem. We get very quickly that Annamalie is a goofball and that the narrator is alternately amused and frustrated by his eccentricities. And yet the story recounts for us an ever increasing list of these eccentricities – and to what end? The story closes when Annamalie precipitately decides he must return to his home village to deal with a family crisis (something about a sewing machine, a tailor, a poorly worded debt bond, and Annamalie’s family homestead) at a time inconvenient for his boss, the writer/narrator. Annamalie leaves – as unexpectedly as he appeared. This in itself isn’t a bad ending (indeed, it is certainly a sensible coda to a story about such a character), but we’ve been given a very long string of events that seem to be leading somewhere – but they don’t. In a way, I suppose, Narayan has recounted for us one of life’s mysteries – that experience we’ve all had of having people mysteriously show up in our lives, hang around a while, then, as mysteriously, disappear, never to be heard from again. But the truth is, this could have been handled as well, likely better, in 1000 words rather than in the 5000 Narayan spends on the tale.

One last story will nicely close this essay. “Under the Banyan Tree,” the story that gives this collection its name, tells the tale of a storyteller named Nambi who is the pride of his village. He lives in a temple dedicated to the goddess Shakti (one might think of this as analogous to living with a Muse and not be incorrect) who, it seems, gives him the power of telling stories. Nambi’s tales are elaborate and complex, we are told, and usually take several evenings to relate. Then one evening Nambi begins a story – and cannot go on. He attempts to continue for several nights, but his gift has left him. In vain he tries various methods of regaining his talent but none works. Finally, he calls together the village and relates this to them:

It is the Mother who gives the gifts, and it is she who takes away the gifts. Nambi is a dotard. He speaks when the Mother has anything to say. He is struck dumb when she has nothing to say. But what is the use of the jasmine when it has lost its scent? What is the lamp for when all the oil is gone? Goddess be thanked…. These are my last words on this earth; and this is my greatest story.

And Narayan closes the story:

The rest of his life (he lived a few more years) was one great consummate silence.

One is tempted to believe that this entire collection was worth the reading for that last sentence of its last story. Uneven as it is, Under the Banyan Tree reveals that Graham Greene was right about Narayan: his talent is quicksilver, but it is a great talent. I shall look forward to reading more of his work.