The Fog of War: Remarque’s All Quiet on the Western Front…

“And men will not understand us…and the war will be forgotten  – and the generation that has grown up after us will be strange to us and push us aside. We will be superfluous even to ourselves…the years will pass by and we shall fall into ruin.” – Erich Maria Remarque 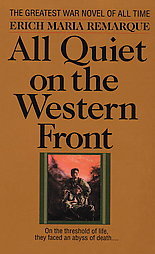 It is often called the greatest war novel of all time.

Erich Maria Remarque’s depiction of the horror of an ordinary soldier’s life in World War I,  All Quiet on the Western Front, is a work of great power that haunts one long after one has completed it. Like other great examiners of war from Grimmelshausen to Stephen Crane to Norman Mailer to Kevin Powers, Remarque has the skill to give us the psychological horror of being lost on the battlefield – and lost at home.

What sets Remarque’s novel apart, of course, is that it is told from the point of view of an “enemy” soldier, Paul Baumer, a private in the German Imperial Army. (Simplicius, the hero of Grimmelshausen’s novel, is German, too. But since the Thirty Years’ War is only vague European history to Americans, one can safely assume that his nationality is not a matter of controversy.) One of the revelations, in fact, of All Quiet on the Western Front is the discovery that the ordinary German soldier felt much the same as the ordinary British soldier, the ordinary French soldier, the ordinary Russian soldier, the ordinary American soldier: like a pawn being moved – and sacrificed – without regard for his humanity. Ordinary people’s lives don’t count to the rich and powerful who believe themselves masters of history.

Paul Baumer, a young man barely twenty is already a battle scarred veteran when the novel opens. He is attending to yet another schoolmate who is dying. Baumer is one of twenty young men from his class who enlisted, inspired to their “heroic” act by their rabid patriot schoolmaster (who ends up in the home guard only after being drafted). At the time the schoolmate, Kemmerich, dies, Baumer informs the reader that of the twenty, eight are dead, three are now demobilized after losing limbs, and one is in a mental institution. By the novel’s end, Baumer and three of his classmates who serve with him in the same regiment are all also dead or amputees.

As Baumer sardonically observes near the book’s end, “War is war.”

The novel has both the qualities of relentlessness and of sameness to it. There are, as a quote attributed to various sources describes war, “long periods of boredom punctuated by moments of terror.” For Baumer and his comrades Kat, Kropp, Müller, and Tjaden, the war never ends. There are respites – one comes off the front lines for R&R, gets some decent food (if one has a good scavenger like Kat as a friend), gets some drinking in (courtesy of the army bar), maybe even has a romantic adventure. Then it is back to the line, back to the hell of machine gun fire, artillery bombardment, star shells (explosive devices designed to fling the maximum amount of shrapnel and cause the maximum amount of carnage), and trenches with their stench and lack of food and rats. Baumer and his mates endure that for a while, then come off the line again for another respite.

Relentlessness and sameness. Punctuated by terror and death. Why, Baumer and his comrades ask themselves? Baumer offers this explanation:

A word of command has made these silent figures our enemies; a word of command might transform them into our friends. At some table a document is signed by some persons none of us knows, and then for years together that very crime on which formerly the world’s condemnation and severest penalty fall, becomes our highest aim.

The powerlessness of Baumer and his friends to change their lot leaves them in that peculiar existential position Tennyson describes so well: “Ours is not to reason why/Ours is but to do, or die.” As for what happens to a person once placed in such a position, what Remarque reminds us again and again is that for a soldier, the object is simply to stay alive, to be alive. Baumer describes the reasons why as he stands outside the infirmary after Kemmerich’s death:

Outside the door I am aware of the darkness and the wind as a deliverance. I breathe as deep as I can, and feel the wind in my face, warm and soft as never before. Thoughts of girls, of flowery meadows, of white clouds come into my head. My feet begin to move forward in my boots, I go quicker, I run. The earth is streaming with forces which pour into me through the soles of my feet….My limbs move supplely, I feel my joints strong. I breathe the air deeply. The night lives. I live….

Twice in the novel Paul Baumer is taken away from the war. The first time he is sent on leave to visit his mother who is ailing. It is a heartbreaking visit in many ways. First his mother’s illness is cancer from which she will not recover. Second is the misunderstanding and pomposity of those he sees in his hometown, those who think they understand the war and who are so dismissive of his explanations of the truth of the failing German effort and the horror of life on the front lines:

I imagined leave would be different from this. Indeed, it was different a year ago. It is I, of course, that has changed in the interval. There lies a gulf between that time and today. At that time I still knew nothing about the war, we had only been in quiet sectors. But now I see that I have been crushed without knowing it. I find I do not belong here anymore, it is a foreign world.

In a scene that reminds one of Hemingway’s classic story, “Soldier’s Home,” where Krebs finds himself isolated because he cannot explain the inexplicable, Baumer explains what he needs and cannot find among the people of his home village:

They talk too much for me. They have worries, aims, desires that I cannot comprehend. I often sit with one of them in the little beer garden and try to explain to him that this is really the only thing: just to sit quietly like this. They understand, of course, they agree, they may even feel it so, too, but only with words, only with words…they are so divided in themselves that none feels it in his whole essence; I cannot even say myself exactly what I mean.

Baumer’s passion before the war had been his books and his writing. But in one of the novel’s most chilling scenes he discovers while in his room with his books and papers that he has lost not only his passion but that his books and writing no longer comfort him:

I want to feel the same powerful, nameless urge that I used to feel when I turned to my books.

But he discovers that as he digs into his treasures that they bring him no relief:

Then I take one of the books, intending to read, and turn over the leaves. But I put it away and take out another…. I look, turn over the pages, take out fresh books. Already they are piled beside me…. I stand there dumb. As before a judge. Dejected. Words, Words, Words – they do not reach me. Slowly, I place the books back in the shelves. Nevermore. Quietly I go out of the room.

The chilling reference to Poe is there, one has to believe, to remind us that for Paul Baumer, as for the narrator of “The Raven,” something is gone that will not, perhaps cannot, come again.

After he returns to the front, Baumer goes through a horrific experience where he gets lost in No Man’s Land and spends a terrifying night in a shell crater. Its climax is Baumer’s worst experience of the war: he kills a French soldier who has fallen into his hole and has to sit with the body for nearly a day until night fall when he can make his way back to his own trenches. His friends console him as they stand watching German snipers killing men in the opposing trenches and bragging roundly as they do. The irony of the scene for a contemporary reader will not, I hope, be lost.

The novel’s denouement then unravels with a swiftness that belies the agonizing experiences it details: both Baumer and Kropp are wounded while on guard duty. Kropp loses a leg and is out of the war, though the shadow of his possible suicide hovers over their recovery. Baumer is sent back into action where he sees his friends die one after another. The saddest of these cases is Kat, whom Baumer is trying to take to safety after he is shot in the leg just above the knee. During their retreat from the battlefield an artillery barrage begins, and again and again Baumer must stagger to cover with his friend on his back. It is only when he reaches safety and hands over his friend to an orderly that he discovers that a small piece of shrapnel has hit his closest comrade in the back of the head and killed him.

It is the final blow. Baumer sums up all the terror, the horror, the grief, the loss and its effect on him in this chilling passage:

Let the months and years come, they can take nothing from me, they can take nothing more. I am so alone and so without hope that I can confront them without fear. The life that has borne me through these years is still in my hands and in my eyes. Whether I have subdued it, I know not. But so long as it is there, it will seek its own way out, heedless of the will that is within me.

It is a magnificent ending to this brilliant, bleak masterpiece. Except that it isn’t

All Quiet on the Western Front has a terrible flaw at its end. If it is Remarque’s mistake, then a sensible editor should have talked him out of it. If it is an editorial suggestion, Remarque should have vetoed it in no uncertain terms. That neither occurred is a shame, for the tacked on coda feels both contrived and forced.

After the brilliant closing passage above, one turns the page to find a short scene describing Paul Baumer’s death in late October of 1918, only a couple of weeks before the armistice that ended the fighting in WWI. It is certainly poignant, but it is, from a writer and reader standpoint, completely unnecessary. One understands that it underscores the pointlessness and waste of war. But it has both a manipulative and a nihilistic feel about it that, frankly, irks the hell out of me both as a writer and as a reader. From the writer standpoint, it undercuts the beautiful passage quoted above needlessly. From a reader standpoint, it is like firing shots into a corpse.

That said, this must also be said.  All Quiet on the Western Front is a book that every person who thinks war is necessary to human existence should be compelled to read. If that were done, perhaps, we would find ourselves in a world with more plowshares than swords.