Andre Gide’s Corydon: Defending who you are… 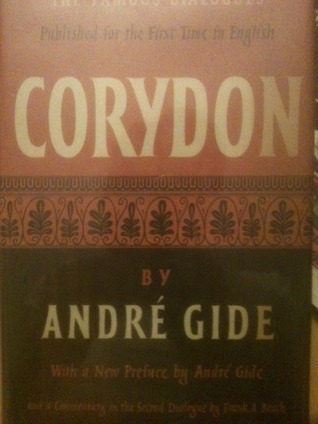 The complex and provocative André Gide is known for his unconventional examinations of morality in which he usually pits the conventions of accepted public morals against the  individual moral (sometimes amoral) views of his characters. In novels such as The Immoralist, Strait is the Gate, and The Vatican Cellars Gide explores alternate lifestyles, failed relationships, and Nietzschean acts of ubermensch-iness for both tragic and comic effect. These works won Gide the Nobel Prize in 1947.

I’ve read all of the above mentioned works by Gide. My favorite is The Vatican Cellars (Les Caves du Vatican), a comic adventure that crosses elements of The DaVinci Code sort of conspiracy theory nonsense with Dostoyevsky’s Crime and Punishment. In the hands of an arch satirist like Gide, a plot about saving the Pope from the machinations of the Masons goes sideways because of the actions of a Raskolnikovean sort of ne’er-do-well named Lafcadio who decides that what he really needs to do with his life is kill someone at random so that there is no motive at all to connect him to the murder. Unfortunately, the man he decides to kill turns out to be a vital cog in the aforementioned Pope v. Masons business. Hilarity of the darkest shades ensues. Really. It’s a very funny book – in dark, dark ways.

Unfortunately, this sort of funny stuff was an anomaly in Gide’s oeuvre. He mainly focuses on the unhappy effects of rebelling against (L’immoraliste) or falling prey to (La porte étroite) accepted social and cultural institutions and behaviors. Corydon, his attempt to justify homosexuality as a natural human behavior, is firmly on the serious side of the Gide ledger.

For the bibliophiles out there, I read this in the original 1950 hard back edition, the first publication of the English translation of Gide’s Corydon in the United States. Anyone who reads my book essays knows that I like picking up books from used book shops, antique stores, and other such places. The history of how I obtained this gem is slightly remarkable, so I share it here. I bought it from my local public library who was reducing inventory. That’s the same place where I got the Christopher Smart translation of Horace that I used for my series on his works. I think I paid 50 cents or a dollar for each book. And it needs no updating; it works great. The next time you’re waiting in line to spend hundreds of dollars to upgrade your smart phone, think about this.

Corydon is presented as a series of dialogues (whether these are Socratic or Platonic I leave to those who make such fine distinctions to decide). The unnamed narrator visits with and discusses the nature of human sexuality with an old friend, one Corydon (the name is chosen for obvious reasons). This Corydon is a doctor – and a homosexual – and engages the narrator in a series of dialogues concerning the role of homosexuality in the natural world, in culture and society, in the arts. Corydon argues for homosexuality’s acceptance as a natural state for some humans. Corydon offers sets of arguments for his assertions from each of the above mentioned fields. His argument from science relies on attempting to show that males are naturally more sexually active than females, and that in many species where males outnumber females that male-male sexual relationships offer outlets for all that male sexual energy. His cultural argument bases itself on ancient Greece (as you might guess) and claims that the Greek practice of “man-boy love” practiced there gave women greater honor and respect. His argument from the arts is, more than anything, merely a claim that since many important artists have been homosexual, then periods of great artistic achievement are somehow spawned by periods of high homosexual activity (he cites Golden Age Greece and Elizabethan England as prime examples).

The problem is, of course, that much of what Gide uses as argument (and one would be wise to read Corydon’s dialogues as Gide the homosexual arguing with Gide the intellectual) is debatable at best. His “science” argument suffers because he fails to note the existence of female homosexuality (the reasons why are not clear), much less include it in his argument. The cultural argument fails because numerous historians have shown that women were not valued, respected, or given honors in ancient Greece. Finally, the arts argument suffers from a logical fallacy (non sequitur) – it does not necessarily follow that periods of greater homosexual activity necessarily mean that greater artistic production will occur.

All that said, Gide is, of course right that homosexuality is a natural state for humans and that attempts to repress, shame, or otherwise regulate it based upon religious or social beliefs are mistaken. No less an expert on sexuality than Frank Beach, in an essay on the Second Dialogue of Corydon, offers the same conclusion. While dismissing much of Gide’s argument support, Beach accepts his initial assertion: homosexuality is a natural state, not a “choice.” Beach’s belief is like Gide’s – that acceptance of difference will make understanding and integration of the entire range of behavior possible within society.

Gide is known, as I have noted, as a provocateur. In Corydon, he invokes ancient Greece as a cultural model (and evidentiary support for) public acceptance of homosexuality. Unfortunately, arguing for the social norms of ancient Greece means that Gide also argues for pederasty (his character Corydon allows as much). One wants to believe that Gide is merely doing what he often does: baiting us to make us think more deeply about a complex social/cultural issue. However, that’s not at all clear – and it makes his argument troublingly questionable at best.

Ultimately, Corydon is a brave attempt by a gay man to defend being gay. Given the time at which Gide published this work (the first widely offered publication was in 1924), it is a work of extraordinary courage. Misguided (even detestable) though some of his views are, hapless as some of his evidence is, he has an important point and he makes it.

2 Responses to Andre Gide’s Corydon: Defending who you are…