Stop me if you’ve heard this one before…parent dotes on children who are ingrates and…yeah, well… 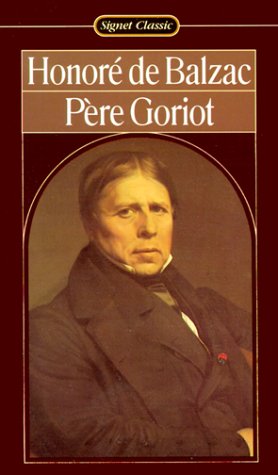 It is easy to make arguments against Père Goriot. It’s a rather sloppy book because the author, Honoré de Balzac, wrote quickly and rarely labored over his words. It’s a frustrating book because Balzac veers back and forth between Romanticism and Realism, sometimes on the same page. Two characters who would seem to be major figures disappear from the novel without adequate explanation. The ending is both overly long and abrupt, quite an accomplishment in itself, but not the preferred effect one would expect a great author to achieve.

In spite of all these flaws, it’s a magnificent book and one that will haunt anyone who has been a parent or had a parent who, for all the best intentions in the world, can’t seem to get that most fundamental life relationship right.

A couple of rambling asides before I get to Goriot. This is another of those books that I read a very long time ago (I believe Nixon was POTUS) and decided to re-read for this year’s world lit themed portion of the 2015 reading list. I read an essay decades ago that I’ve been trying to find that was on the topic of how we come to books at different points in our lives and find that we can appreciate a book as a more mature reader after not having appreciated it when younger – or of re-reading something that we adored when young as a mature reader and finding it sadly lacking. (I want to say the essay was by Russell Baker, but I am likely mistaken – if anyone recognizes the essay from my brief, idiosyncratic description, please let me know). For instance, in the current group of books I’ve been reading and writing about, I loved Lermontov’s A Hero of Our Time when I read it at 21; re-reading it now, in my early 60’s, my considered opinion was meh. On the other hand, I read Pushkin’s tales at around the same time in my youth and found they still held their fascination. I suspect many readers have had this experience; feel free to comment upon this phenomenon below. I’d love to hear about others’ experiences returning to books after some time.

Balzac? Re-reading Balzac was closer to re-reading Pushkin. No, it was better. Pushkin’s literary reputation is so secure that I wasn’t surprised to find his work had aged well; Balzac’s reputation has risen and fallen over time, sometimes inexplicably, so I wasn’t certain how I’d take to Père Goriot.

Frankly, I loved it.

The story is straightforward enough for your basic convolutedly plotted 19th century novel. Goriot, the title character (though not the main character), was once a wealthy flour merchant. We meet him living in straightened circumstances after having given his two daughters (think Goneril and Regan without a compensating Cordelia) nearly all his wealth in the form of marriage dowries. The boardinghouse where Goriot lives is in Paris’s Latin Quarter, an area inhabited by students and those less – shall we say fashionable citizens of the French capital. His daughters, both of whom have married titled gentlemen, live in fashionable Parisian neighborhoods and conduct themselves as fashionable members of Parisian society do: their husbands keep mistresses and they have lovers. The elder daughter, Anastasie, has a lover who bleeds her for money to support his gambling addiction. Since her husband has no interest in paying his wife’s lover’s gambling debts, she constantly bleeds her doting father of what little money he has left to gain money to give to her lover who eventually dumps her after fomenting a marriage crisis by getting her to pawn her husband’s family jewels. The other daughter, Delphine, has been dumped by her wealthy lover and her husband, an Alsatian (read hated German) banker, has tied up her money in a morass of dealing and double dealing that keeps her from getting free of him. Both daughters have gradually excluded Goriot from their family circles, mainly because he is no longer “good enough” to be allowed into their homes except through back or side entrances – in other words, as the tradesman he is.

Enter Eugène de Rastignac, the hero of our tale. Rastignac is a young man from the provinces, a law student, who lives in the same boardinghouse as Goriot. Rastignac is best described, perhaps, as a classic “poor relation” of one of France’s noblest families. This gets him entree into Parisian society where he eventually meets both Anastasie and Delphine. He becomes Delphine’s lover – and, through a series of discoveries wherein he discovers who her father is – Goriot’s friend and protector. Alas, his protection is inadequate, though Goriot, as he has with his real children, is able to save Eugène from involving himself with Vautrin, a cunning tempter who turns out to be a dangerous criminal. Eventually the stress of trying to save his children from their husbands’ machinations is too much and Goriot has a stroke. Eugène and his friend Bianchon, a medical student, care for Goriot in his final illness, (that protracted ending of the novel I mentioned above is almost entirely Goriot’s death bed agonies). Neither Delphine nor Anastasie bother to visit their father at his ending, and their families send empty carriages to his pauper’s funeral. Eugène, tempered by this bitter experience, now understands what Parisian society really is, and leaves Goriot’s grave to attend his mistress Delphine Goriot de Nucingen, hardened of heart and determined to conquer both her and society – one hopes, for some good end, though that remains to be seen.

Balzac writes in a fairly breathless style and events hurry one after another at ever increasing pace as the novel goes along. One would think that at such a hurried pace that the author would not offer us much in the way of quotable observations, insights or bon mots. Not so. Balzac is a wonderful and often perspicacious observer of la comedie humaine, as he calls it, though in some ways it more closely resembles Malraux’s condition humaine. Here are some of his observations:

On some peoples’ characteristic willingness to be more open to strangers than to their families:

This is an odd but true fact of life; its roots may be easily traced in the human heart. Perhaps such people have no more to gain  from the people they live with; they have exposed the emptiness of their souls to them, they feel secretly criticized by them, and feel the criticism to be just.

Eugène’s cousin, Madame de Beauséant, who helps his entree in Paris society, offers him this cynical, though principled, advice:

…success is everything, it’s the key to power. If women think you’re clever and talented, the men will think the same, if you don’t undeceive them. You can go for anything you choose then, you’ll have a foothold everywhere. Then you’ll see what the world is, a collection of fools and knaves. You must try to be neither.

Vautrin offers Eugène a version of this same advice, only tinged by a hardened criminal’s amorality:

When a man boasts that he never changes his mind, he’s taking it on himself always to go along one straight line, an ass who believes in infallibility. Principles don’t exist, only events. Laws don’t exist, only circumstances. The intelligent man weds himself to them in order to control them.

And then there’s Goriot, the antithesis of both the principled cynic Madame de Beauséant and the unprincipled criminal Vautrin, here waxing rhapsodic on the joys of parenthood:

You’ll realize one day that your children’s happiness means more to you than your own. I can’t explain it to you; it’s like a movement inside you that  spreads gladness all through you.

And here the author speaks to us directly. I leave it for you to decide whose view he favors:

Are not our finer feelings the poems of the human will?

But then there’s this piece of skeptical rhapsody:

Love is a religion, and his cult must in the nature of things be more costly than those of all other deities; Love stays for a moment and then passes on; like the urchin of the streets, his course may be traced by the damage he has done.

Perhaps the single most pointed lesson comes out of the mouth of the simple Goriot on his death bed:

Grand people are not great. I found that out by experience!

Observation and critique of society aside, ultimately Père Goriot is a novel about the painful consequences of misguided parenting. Here Goriot acknowledges his mistakes, albeit far too late:

I did not behave to them properly; I was a fool to resign my rights. I would have humbled myself in the dust for them. What could you expect? The most beautiful nature, the noblest soul, would have been spoiled by such indulgence. I am a wretch, I am justly punished. I, and I only, am to blame for all their sins; I spoiled them….They have never cared to guess my disappointments, my sorrows, my wants; they never cared to know my life….

But Goriot does not entirely fail. His example teaches his surrogate son Eugène important, if bitter, lessons. At Goriot’s funeral, Eugène, unable to speak, grasps the hand of a boardinghouse servant, one of the few at the old man’s rites. The servant, Christophe (what’s in a name?), articulates Eugène’s feelings, feelings that lie, as Wordsworth suggests, “too deep for tears”:

he was a good and worthy man, who never said one word louder than another; he never did anyone any harm, and gave nobody any trouble.

At the novel’s end Eugène, looking out over the city, tells Paris:

“Henceforth, there is war between us.”

One expects that, in a kind of fratricide, Goriot’s daughters will become casualties of Eugène’s war. Still, we sense that, even victorious, Eugène will have those moments when, in remembering his Père Goriot, that the words of Shakespeare may come to mind:

I have full cause of weeping; but this heart
Shall break into a hundred thousand flaws
Or ere I’ll weep….