Lermontov’s A Hero of Our Time: the Byron factor

“Contradiction is, with me, an innate passion; my entire life has been nothing but a chain of sad and frustrating contradictions to heart or reason.” – Grigoriy Pechorin in A Hero of Our Time… 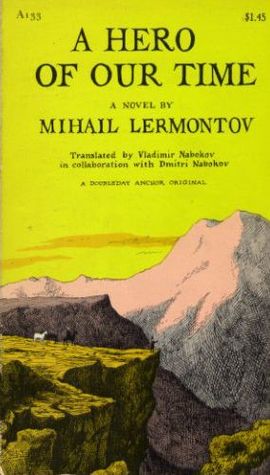 A Hero of Our Time by Mihail Lermontov (image courtesy Goodreads)

Another Russian classic from the 2015 reading list. Mihail Lermontov, like Pushkin, whom I write about last time, is a Russian Romantic era writer, and his only significant work, the novel A Hero of Our Time, is as good an example of the enormous impact of Byron on European literature as a reader will ever find.

The Byronic figure, a response to proto-Romantic figures like Mackenzie’s The Man of Feeling or Goethe’s Werther, was a world weary, bored, self-destructive  figure who cannot find peace anywhere. Lermontov’s Grigoriy Pechorin is just such a figure. His inability to relate to his fellow human beings is not simply excused – it is admired and forgiven:

…if all people reasoned more, they would be convinced that life is not worth worrying about so much…

A few words about the translation. It is by the great Russian author Vladimir Nabokov, who also offers an amazing, if somewhat jangled, introduction to this volume. Here the great synesthete notes that the chief difficulty in translating Lermontov is his refusal to see his world in accurate colors that would dramatize Pechorin’s (anti) heroism:

The nineteenth century Russian writer’s indifference to exact shades of visual color leads to an acceptance of rather droll epithets condoned by literary usage ( a surprising thing in the case of Lermontov, who was not only a painter in the literal sense , but saw colors and was able to name them)….

It’s a valid if idiosyncratic complaint. Lermontov’s Pechorin uses exclamation points, for example, rather more than is strictly necessary. A Hero of Our Time has the flaws of a first novel written by a young writer. But it also has the passion and flair of a young talent finding its way.

What Lermontov (and Nabokov) give us is Pechorin himself. Throughout the novel he draws us into his ennui and weltschmerz:

It is almost impossible to accept Pechorin except on his own terms. He presents himself without apologies, and he refuses to fit any norm:

In the first place, they never laughed when he [Pechorin] was laughing! Have you observed this bizarre trait in some people? It is either the sign of a wicked nature or of a deep and constant melancholy.

Pechorin is brutally honest about his prejudices:

I confess I have a strong prejudice against those who are blind, one-eyed, deaf, mute, legless, armless, hunchbacked, and so forth. I have observed that there always exists some strange relationship between the appearance of a man and his soul, as if with the loss of a limb, the soul lost one of its senses.

And equally merciless in his criticism of friends:

His object is to become the hero of a novel. So often has he tried to convince others that he is a being not made for this world and doomed to suffer in secret, that he has almost succeeded in convincing himself of it…. I have seen through him, and that is why he dislikes me, although outwardly we are on the friendliest of terms.

This friend, one Grushnitski, ends up first as a rival of Pechorin for the affections of the lovely Princess Ligovskoy, then as his bitter enemy, and finally as Pechorin’s victim in a duel. Pechorin, out of boredom, engineers all this for his own – amusement? That’s not quite it, though even Pechorin himself struggles to explain his behavior:

Contradiction is, with me, an innate passion; my entire life has been nothing but a chain of sad and frustrating contradictions  to heart or reason.

Like any good Byronic hero, Pechorin leaves behind him a string of broken hearts, ruined lives, disillusioned friends, and fascinated observers. Again and again he takes risks and tempts fate for no other reason than that he wants to live his life on his terms. And above all, he wants to avoid being one of “them”:

That’s the human being for you! They are all like that: they know beforehand all the bad sides of an action. They help you, they advise you, they even approve of it, perceiving the impossibility of a different course – and afterward they wash their hands of it, and turn away indignantly from him who had the courage to take upon himself the entire burden of responsibility. They are all like that, even the kindest, even the most intelligent ones. upon

And to the end Pechorin is searching, questioning, doubting:

…how can a man know for certain whether or not he is really convinced of anything? And how often we mistake, for conviction, the deceit of our own senses or an error of reasoning? I like to have doubts, about everything: this inclination of the mind does not impinge upon resoluteness of character. On the contrary, so far as I am concerned, I always advance with greater courage when I do not know what awaits me.

It may seem that one knows Pechorin no better at the end of A Hero of Our Time than at the beginning. In a sense, that’s perhaps the novel’s central message. Pechorin is a mystery from the time we meet him until the time we learn of his death.

Nothing could be more Byronic.

2 Responses to Lermontov’s A Hero of Our Time: the Byron factor