Pushkin’s prose tales, mostly uncompleted, tantalize and torment readers both with their beauty and with the wistful sense of ‘what might have been’ that their incompleteness conveys…. 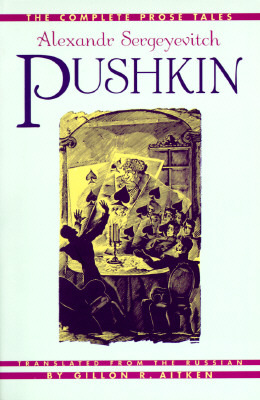 This selection from the 2015 reading list is a re-read from my undergraduate days. The Complete Prose Tales of Alexandr Sergeyevitch Pushkin in the Gillon Aitken translation includes every piece that Pushkin worked on. Like any scholarly edition, it has that painstaking sense of completeness that can feel like both a blessing and a curse. It is wonderful to read all the prose that Pushkin attempted in his life; it is painful to be left wondering again and again as stories and novellas break off with the translator’s too oft repeated message:

Pushkin is Russia’s first great modern writer. Renowned even more as a poet than as a prose writer, his magnum opus, Eugene Onegin, tells a story that is haunting in its prescience: a sensitive poet is drawn into a duel and killed due to his flirtatious fiancée.

Pushkin himself was killed at the age of 37 in a duel caused by his flirtatious wife. Art can imitate life with disastrous consequences.

Pushkin was a Romantic, and his characters share traits with those created by other Romantics – he’s clearly influenced by Goethe and  Byron. There’s sturm und drang, there are brooding, ennui plagued heroes, there are emotive heroines, there are wild, exotic locales. Pushkin balances this often, however, with kind hearted priests, peasant philosophers, calm, decisive parents. Mostly what sets Pushkin’s tales apart is that “beautiful sadness” that is so Russian (and decidedly different from the weltschmerz of the typical Romantic hero) and that Pushkin’s successors Tolstoy, Gogol, and Turgenev illuminate in their own work. That capturing of the essence of the fatalism that seems to pervade the Russian psyche is Pushkin’s greatest achievement, perhaps. Unlike Russian writers before him, Pushkin never fails to make us feel that what happens in his tales could only happen in Russia – to Russians. It seems a simple thing – but it is a brilliant achievement both artistically and ethnically. Revealing the truth of what it means to be who one is, living where one is, at the time one is living is attaining one of the great goals in human communication. Pushkin’s family history is fascinating, and he makes a nod to it in the unfinished novel The Moor of Peter the Great. The Moor in question, Ibrahim, is based upon Pushkin’s own maternal great-grandfather, an Abyssinian prince who came to Russia as a hostage to the Tsar. The seven extant chapters tantalize us with nascent political intrigues and a romance bound to cause difficulties: a marriage arranged by Peter the Great between Ibrahim and a daughter of one of the great boyar families.

A Novel in Letters is a satire of sentimental epistolary novels and of the romantic young ladies who read them. There’s this lovely skewering description of the godfather of epistolary novels, Samuel Richardson:

Lisa: I intend to read my way right through it and have started with Richardson. One must live in the country in order to be able to read about the much praised Clarissa.

Sasha: Thank you…for your report on Richardson. Now I have some understanding of him. With my impatience, I cannot hope to read him right through; even with Walter Scott, I find the number of pages excessive.

The most complete work in this collection is The Tales of the Late Ivan Petrovitch Belkin. It is composed of four wonderful stories. Of these, “The Shot” is as good a tale about the strange vagaries of duels as exists. “The Blizzard,” a love story with a beautiful twist ending, contains this gem:

Moral platitudes are wonderfully useful when we can find little in ourselves to justify our actions.

Roslavlev, a story about a Russian noblewoman who falls in love with a Frenchman during the Napoleonic wars,  allows Pushkin to explore the nature of patriotism in a corrupt society even as he explores the relationship between love and war:

The intellectuals of the period exalted Napoleon with fanatical servility and joked about [Russia’s] misfortunes. Unhappily, the people who spoke up in defense of their country were a little simple-minded; they were derided – quite amusingly – and had no influence….The young people spoke with contempt and indifference about everything Russian….On brief, society was pretty rotten.

“The Queen of Spades,” perhaps Pushkin’s most famous story, is another story with an ironic ending. It concerns a jaded old countess, a young adventurer, a game of chance. It also concerns the struggle between love and avarice. Pushkin describes the countess’s character thus:

The Countess *** was far from being wicked, but she had the capriciousness of a woman who has been spoiled by the world, and the miserliness and cold-hearted egotism of all old people who have done with loving and whose thoughts lie with the past.

The young adventurer, one Hermann, is the opposite of what one expects in such a figure. Instead of a wastrel spendthrift, he is:

…secretive and ambitious, and his companions rarely had occasion to laugh at his excessive thrift.

The last of the Pushkin stories I want to mention is an unfinished short story called “Egyptian Nights.” This story contains, perhaps, Pushkin’s most clearly expressed ideas about art and artists. It concerns a young poet named Charsky who is approached by an Italian improvisatore who asks him for help advancing his career. The poet resists the Italian’s pleas at first, but when he hears the artist extemporize a poem on artistic inspiration, he is moved to help him. Charsky offers him his first improvisation theme – and introduces what was meant to be a key theme of the story:

The poet himself should choose the subjects for his songs; the crowd has no right to direct his inspiration.

After the Italian completes his poetic feat, Charsky notes that his new protege’s talent seems to defy explanation. The Italian replies with this explanation of the artistic process:

Every talent is beyond explanation. How does a sculptor see, in a block of Carrara marble, and how, by chipping off its envelope with hammer and chisel, does he reveal it? Why does the poet’s idea emerge from his head already set in rhyming quartets and harmoniously scanned? No one, apart from the improvisatore himself, can understand the speed of impression, that narrow link between real inspiration and a strange external will….

As one reads Pushkin, one realizes that in this description of art as a “…narrow link between real inspiration and a strange external will” he has explained his own genius. His gift was his ability to merge the Russian character with the Romantic sensibility. While that merger was personally disastrous for him, it made him a great writer.