As women members of the Heian court of medieval Japan, poets Ono no Kamachi and Izumi Shikibu lived lives that were proscribed and governed by artifice. Through poetry they found ways of expressing their feelings and insights about those lives. 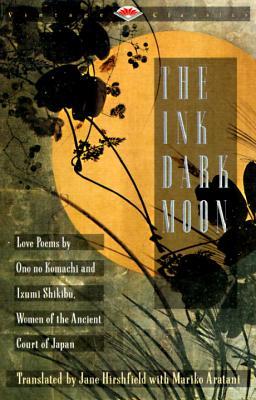 This book from the 2015 reading list was recommended to me by my wife Lea who has a deep affection for, appreciation of, and skill at Asian poetry and its forms. The Ink Dark Moon is a collection of poems by two women of the Heian period of Japanese history. This particular period of Japanese history was one of great cultural achievement in both art and literature, Interestingly, most of the outstanding poets of the period are women and the two poets represented in this work, Ono no Kamachi and Izumi Shikibu, are perhaps the finest of these poets.

The dominant verse form used by the poets is the Japanese classical waka in its short form known as the tanka. In Japanese a tanka has 31 syllables arranged  in a 5-7-5-7-7 pattern. (One can compare this to the more familiar haiku which is even briefer and which follows, in Japanese, a syllabic pattern of 5-7-5.)

[Note: these syllabic forms are impossible to reproduce in English because of the difference between an inflection-based language like Japanese and a word order based language like English. This translation by Hirschfield and Aratani does an admirable – indeed, a remarkable – job of bridging the gap, but the translations are that – translations. They are not literal word-for-word reproductions of the works of Kamachi or Shikibu.]

The themes of these poems are strictly limited and are described in detail in the preface to a 10th century anthology called the Kokinshu. Suitable subjects include “human emotion in general; thoughts raised by observing the sights and sounds o the natural world; religion; the taming of wildness of the spirit…and [most prominently, especially for these poets] relations between men and women.”

That last topic, relations between men and women, dominate the poems in The Ink Dark Moon. This is not surprising given that as ladies-in-waiting carried on numerous love affairs. Imperial court mores allowed both men and women a great deal of leeway in their romantic relationships, and, given the Heian period’s highly aesthetic bent, such amours were carried on through poetry. Romances were begun, consummated, continued, and ended via clever, occasionally striking, poems exchanged by lovers. In the cases of Ono no Kamachi and Izumi Shikibu, the sustained brilliance of their poetic output made their forays into love poetry far more than mere court amusements.

Ono no Kamachi is the elder of these two poets and considered both one of Japan’s greatest poets and a legendary figure. She came to the Heian court at about the age of 12-13 and became renowned as a great beauty, a challenging companion to men and women, and a brilliant poet. Her subject is most often love, especially the stylized love affairs of courtiers. What makes Kamachi’s work shine is her ability to express the range of emotion a love affair causes with accuracy and authenticity as in these examples:

When my desire
grows too fierce
I wear my bed clothes
inside out,
dark as the night’s rough husk

I know it must be this way
in the waking world,
but how cruel —
even in my dreams
we hide from others’ eyes

No way to see him
on this moonless night —
I lie awake longing, burning,
breasts racing fire,
heart in flames.

Ono no Kamachi expresses the passions as well as anyone. But it is, perhaps, in this poem about letting go of the artificial life she leads that is wearing her down that she is most poignant:

This body
grown fragile, floating,
a reed cut from its roots . . .
If a stream would ask me
to follow, I’d go, I think

Izumi Shikibu writes with equal facility about a similar life to Komachi’s. Her junior by some 40 years, Shikibu is often mentioned as Japan’s greatest poet – not just of the great Heian period of poetry, but in all Japanese literary history. That’s quite a claim, certainly, but Shikibu impresses in every poem. While she writes, as does Kamachi, of love affairs and emotions, Shikibu seems, in every poem, to reach for something more, something philosophical and mystical, some explanation of not just her life but of all of life:

Remembering you . . .
The fireflies of this marsh
seem like sparks
that rise
from my body’s longing.

Too, Shikibu had a deeper religious bent than Kamachi and the influence of Zen pervades her work:

This pine tree by the rock
must have its memories too:
after a thousand years,
see how its branches
lean towards the ground

But she is capable of as much passion as her legendary antecedent Kamachi:

Even if I/ repeated love’s name/ forever,/ could outward life match/ the intensity of our hearts?

Like Keats, the nightingale offers her an object of profound contemplation:

Rather than recall
in these flowers
the fragrance of the past,
I would like to hear this nightingale’s voice,
to know if his song is as sweet.

That mention of Keats indeed suggests one way of thinking about these two brilliant poets. Kamachi is passionate and declamatory like Shelley; Shikibu  melancholy and reflective like Keats. No where does this come clear more than in poems written at the ends of their lives. First, Kamachi, as ever pouring her heart out:

In this world/ the living grow fewer/ the dead increase/ how much longer must I/ carry this body of grief?

Then here is Shikibu – reflective, wistful:

The way I must enter/ leads through darkness to darkness/ O moon above the mountains’ rim/ please shine a little further/ on my path.

Oh – my favorite? This happy little ditty by Ono no Kamachi…

How sad,
To think I will end
as only
a pale green mist
drifting the far fields.