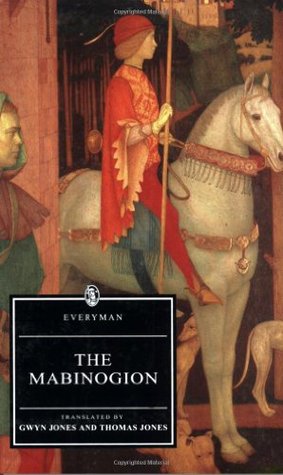 The last of the “folk literature” I’ve completed for this year’s reading list isn’t an epic at all.  The Mabinogion is a collection of Welsh tales that offer insights into Celtic mythology, Welsh national legend, and Arthurian romance. It’s the earliest prose collection in English literature. The tales themselves are somewhat older, several of them coming from the oral tradition. There’s some controversy about the collection. One leading medieval literature scholar even argues that The Mabinogion isn’t really meant to be a collection at all. Given what is known about the source works, he has a point. The Mabinogion links mythological tales with heroic tales with Arthurian romances without any other connection than that they’re all Welsh medieval works. That may be enough to satisfy scholarly readers, but it would make the work a challenge for others, even serious readers, without some guidance. So, as I have mentioned before, if you find this work intriguing and decide to read it, choose a good critical edition and read the scholarly information.

The tales divide into three groups. “The Mabinogi” is a set of four tales, one that offers a combination of mythology and folklore. There are two important characters to be noted: the witch Rhiannon (a name know to readers, perhaps, from the Fleetwood Mac song) and Pryderi, a sort of prototype for the important character who shows up in later tales, Arthur of Britain.

The second group is called  “Native Tales.” These are heroic tales and anticipate the last group which are more or less Arthurian romances. The heroes of these tales overcome magical plagues, giants, and beasts such as wild boars and, de rigeur, dragons. The most interesting of these is “Culhwch and Olwen,” the story of a young knight who finds himself maneuvered into attempting to win the hand of a giant’s daughter. The story is notable for two reasons: it is likely the oldest known story that features King Arthur as a character, and it echos Homer in providing catalogs (lists) of persons at Arthur’s court (similar to The Iliad‘s list of those who sailed with the Greek forces to Troy).

The final group of tales are Arthurian romances. The most completely Arthurian (and hence full of the sort of chivalric behaviors that make one occasionally cringe) of the tales is also the longest in this collection. “Geraint and Enid” concerns one of Arthur’s finest knights and how  his misunderstanding of something his wife says causes him to subject her to humiliation and himself to a series of dangerous and difficult challenges before he realizes that he’s been – well, a jackass to someone who has loved him faithfully and, by occasionally disobeying his somewhat preposterous command not to speak, has time and again saved him from disaster. As in much chivalric literature, the knight’s decidedly unchivalrous behavior to his loving, faithful wife is shrugged off as necessary proof of the knight’s maintenance of his honor. And her steadfastness in the face of his abuse is portrayed as her duty.  It’s uncomfortable reading in this sense: Geraint’s defense of his honor seems driven by pettiness, really childishness indulged because of his physical prowess. His mistreatment of Enid is uncomfortably reminiscent, for a perspicacious contemporary reader, of the behavior of certain other privileged warrior types who are well rewarded for their actions in arenas of physical struggle. As a friend of mine likes to say, “Plus ça change….”

I’ve dithered quite a bit here, trying to come to some overarching commentary, analysis, or insight of The Mabinogion for those kind enough to spend a few minutes reading this essay. Indeed, I was somewhat puzzled about my inability to do so, given that I write about what I read with a certain facility. But an ugly truth keeps whispering to me: “You should say it.”

I did not enjoy The Mabinogion. Not because I found it particularly difficult (a PhD in English helps in that area) but because it seemed to me, in the words of Dr. Johnson, “violently yoked together.”

It is certainly an important historical work – though, like scholar John Bollard, I think that the works might be better served if treated as separate groups of works – in other words, Welsh mythology, Welsh folk history/legends, and the Welsh versions of Arthurian romances should be separate volumes. This would allow perhaps the inclusion of works not chosen for The Mabinogion (whose primary criterion for inclusion seems to have been whether or not one of the works was in one of the two major source works, The White Book of Rhydderch or The Red Book of Hergest) and both allow scholars to offer more specific guidance (clearer critical explanations of the relationships between the Arthurian romances and the works of other writers such as Chrétien de Troyes or the relationship of the “Native Tales” to other quasi-historical works such as Geoffrey of Monmouth’s Historia Regnum Britanniae) and readers to experience the works more fully as individual genres of folk literature (one especially wishes this for the Celtic mythology works since there are some interesting and significant variations between Welsh and Irish versions of the myths, for example).

Who, then, should read The Mabinogion? Those interested in Celtic culture, folklore, and mythology could read those pertinent sections. Those interested in Arthurian romances could read those. As for reading the entire work, however, one might be better served to look elsewhere for more cogent, coherent compilations of Celtic folklore or mythology or Arthurian literature. Save The Mabinogion for later reading once one has gained some background in the area one is interested in. Its peculiarities and problematic structure might then have a certain charm.