The Song of Roland – timeless is as timeless does…

Disagreements about whether The Song of Roland is about Roland’s heroic (and foolhardy) geste or about the ultimate triumph of Charlemagne over enemies within and without his empire seem less important with this re-reading than noting how many people die for that amorphous and deadly social construct we call honor…. 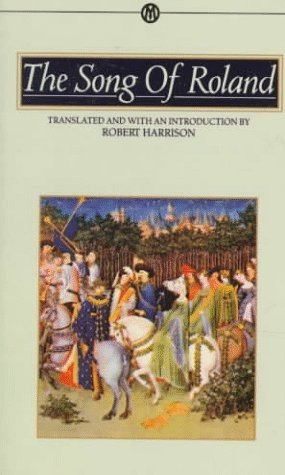 As I make my way methodically through the works of Horace (3 books of odes down, one more to go, then epodes, satires, and his “Art of Poetry”), I’ve been reading at the same time in the epics on my 2015 reading list. I’ve finished The Saga of the Volsungs and am now digging into the Song of the Niebelungs. This made more sense to me than my original plan which was to read about the Volsungs, then go off and do some medieval Chinese poetry before Das Nibelungenlied. Since the German epic tells a version of the Volsung story, I’ll write about those two together – and be able to discuss how a Viking saga got changed for the purposes of courtly literature. Given this dive into epic lit, I’ll probably take on The Mabinogion, the Welsh epic, before heading east for Chinese courtly poetry.

That said, astute readers (and I know you all are) will notice that this essay is clearly going to be about a work not even on the original 2015 reading list. I was (where else?) in my favorite used book store last week when I came across this version of  The Song of Roland. It was nearly a giveaway it was so cheap, so naturally I scooped it up. As I mentioned above, it seemed apropos given that Horace is, while most rewarding, in an 1890’s prose translation sans notes (always read the notes, students) that is costing me extra time as I do some background work so that I understand both poet and translator fully, that I read something along with that noble Roman. I raced through the Volsung saga (in a good critical edition) and now the Chanson de Roland (in a good critical edition).

(Pro[fessor] tip: When one is going to read one of world literature’s great [and old] classics, buy a good critical edition – and read the introduction, translator’s notes, afterword, etc. Taking the time to do this will help you understand the work – and enjoy it considerably more. Doing so will also make you seem much less of an ignorant twit in your Goodreads, Amazon, wherever review. That’s a nice plus.)

The Song of Roland is a poem of its time, of course, and one must, in considering it, keep that uppermost on one’s mind. The story is straightforward enough – Charlemagne’s armies have been campaigning in Spain for seven years, mainly to drive out the Moors (the Muslims who conquered the country during the great Islamic expansion of the 7th-8th centuries) and return Spain to the “true” religion, Christianity. After conquering “all” the Muslim ruled cities but Saragossa, the emperor decides to negotiate  with Marsilla, the Muslim “king” who offers terms: Marsilla agrees to appear at Aix (Charlemagne’s capital) and give up Islam as well as pay a fantastic amount of tribute – everything will be cool. If not, Charlemagne will lay siege to Saragossa and “unleash the dogs of war.” To negotiate this treaty Charlemagne sends one Ganelon, stepfather of Roland. There is bad blood between Ganelon and Roland (unspecified wrongs that only French knights would feel as wrongs, it seems). To get revenge on Roland for these wrongs, Ganelon betrays his emperor and his country and conspires with Marsilla to set Roland, his best buddy Olivier, and the rest of the Twelve Peers (Charlemagne’s select champions) up so that they can be attacked and killed by a vastly superior Islamic army. Ganelon gets lots of loot and revenge on Roland; Marsilla gets a cheap victory and a measure of revenge on Charlemagne. The evil plot works – Roland, performing rear guard duty with Olivier and the other peers (and an army of 20,000) gets surprised by an attack by Marsilla (and an army of 100,000) and, in what French chivalry would consider a “grande geste,” refuses to blow his elephant tusk horn to call for reinforcements. Thousands die on both sides including Roland and Olivier and all the other Peers as well as all of Marsilla’s sons – and eventually even Marsilla himself, his hand having been cut off by Roland.

Late in the battle (too late to change the outcome) Roland finally blows the horn (albeit feebly due to his wounds) and Charlemagne returns. Eventually there’s a second battle, this one between Charlemagne’s main army and the Emir, Baligant, who has come both to aid Marsilla (unaware until he arrives that Marsilla is fatally wounded) and, if all goes well, conquer France for Allah. There is a huge battle that climaxes in single combat between the Emir and Charlemagne. Charlemagne wins and kills Baligant, then the French army returns to Aix where Ganelon is tried for treason. Ganelon claims that getting revenge on Roland was his motive and that he is not guilty of treason. The judges, except a Count Thierry, are inclined to agree. He challenges the verdict, a champion steps up for Ganelon, and, in trial by combat against Ganelon’s champion Pinabel Thierry prevails. Ganelon’s hostages (guys who stood as seconds for him) are all executed and Ganelon gets himself ripped apart by four destriers, each pulling in a different direction. As the Roland poet is wont to say at both appropriate and inappropriate times, AOI! (So be it! – or Amen, if you prefer.)

There are two matters to consider here. The first has to do with the “why” of all this. Ganelon’s betrayal of the French to gain revenge on his stepson Roland, Roland’s refusal to call for reinforcements when he knew his rear guard detachment was overwhelmingly outnumbered, Charlemagne’s single combat with Emir Baligant, even the trial by combat deciding of Ganelon’s treason trial – all of these key events in the poem are matters of honor. As Barbara Tuchman conclusively showed us in A Distant Mirror (and this infamous and ignoble end to the Crusades shows), “matters of honor” led knights of all nations, but especially the French, again and again into disastrous military decisions that eviscerated whole generations of French nobility. Nowhere is the bad decision making based on concepts of honor more clearly illustrated than in La Chanson de Roland. Ganelon – his honor has been besmirched and in getting his revenge he eventually earns himself a good ripping into quarters by war horses. Roland’s “honor” gets him a head wound so that he dies with his brains oozing out. Roland’s beloved, Alde the Beautiful, drops dead at the feet of Charlemagne on hearing of her beloved’s most honorable demise. A splendid time was had by all, it seems. And what was gained? Not much – history tells us that Charlemagne did go to Saragossa and negotiate a deal – but no Muslims converted to Christianity, nor did Muslim rule in Iberia end – for 700 years. (Yes, that’s the right number.) But honor was served, one supposes.

The other issue has to do with the basis of this vicious fighting – religious disagreement. Charlemagne went on his Iberian campaign as a sort of crusade against the Muslims – so the poet, writing some 300 years later during the first pangs of Crusade fever. tells us. Certainly Charlemagne fought against the Saracens and the Moors. While this was certainly done partly for religious reasons, Charlemagne was an empire builder. The language, bitter and mocking on both sides, that characterizes the battlefield exchanges between Roland and Marsilla, later between Charlemagne and Emir Baligant reflect perhaps the attitudes of Pope Urban II more than those of even a Charlemagne.

Charlemagne became the Christian king
par excellence, waging war for the holy
church. Roland, a hero of the faith who
died for his God and his king, became a
model of chivalric virtues according to
the Church: knight, crusader, martyr….
It is between 800 and 1100, but moreover
in the 11th century, that we situate
the idea of holy war that departs from
that of crusade and arrives at jihad.

Baligant, on the other hand, like Charlemagne’s original foe Marsilla:

…does not love god, but serves Mohammed and invokes Apollo. No matter what he does, his ruin will come.

The nonsense about Apollo is just one of the nonsensical ideas medieval Christianity promulgated about Muslims and that the Roland poet presents. There’s also the belief that Muslims worshiped some god called Termagant.  Probably worst of all is the idea the Roland poet promulgates another strongly held belief of medieval Christianity – that Muslims would desert their faith if faced with tribulation – as they are when Marsilla returns from the battle with Roland with his fatal wound:

And they threw down Termagant
And threw Mohammed in a ditch
And pigs and dogs bit at them and defecated
on them….

What really emerges upon reading La Chanson de Roland is a picture of a world where bizarre notions of what must be done to defend that ambiguous quantity “honor”cause leaders to attack that which they do not understand. It also depicts a world where one religion “must” be better than another, and so,  to “inspire” believers, holy war in one form or another is made to seem absolutely necessary to preserve a “way of life.”

Is there any wonder The Song of Roland seems timeless?