Historian Barbara Tuchman’s The Guns of August clearly illuminates the truth of war: in any era it is what is done wrong as much as what is done right that decides conflicts…. 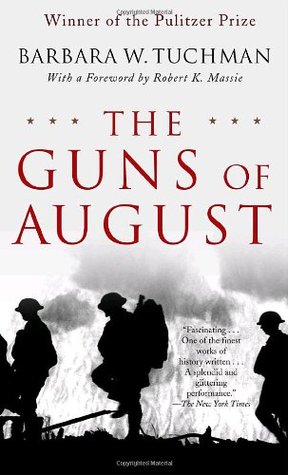 The Guns of August by Barbara Tuchman (image courtesy Goodreads)

The first book from the 2015 reading list was a Christmas present. I have long been an admirer of historian Barbara Tuchman and have long considered her superb A Distant Mirror: The Calamitous 14th Century among my favorite books of any genre. Given that 2014 was the centennial year for the beginning of World War I, I began looking for a copy of her Pulitzer winning exploration of the first months of that “war to end all wars,” The Guns of August sometime last year. Alas, because of my dedication to what we might call “book rescue” (I try to buy used books whenever I can), I found myself (I suspect) competing with others who thought “Hey, its the centennial of the Great War – good time to read (or re-read) Barbara Tuchman.”

So I floundered about trying to catch a used copy at my favorite book stores both physical and online. No luck. Eventually, my interest waned and when I put the book on my Christmas list, it was with little hope that even my clever and perspicacious Lea could find a copy for a Christmas present.

Oh, me of little faith. Find one she did, and I spent the holidays working my way through this fascinating account of the beginning of World War I.

Tuchman covers pretty much what anyone familiar with WWI would expect: the origins of the war (the bizarre and slightly creepy interlocking family relationships of the royal families of England, Germany, Russia, and Austria-Hungary and how those relationships created “family” tensions that sought release through mayhem); the early German successes and excesses; and the eventual combinations of good and bad decision making that caused the Germans to overplay their hand, the French to figure out when (and more importantly how) to fight successfully, and the British finally to get serious about a very serious business. Much of what Tuchman gives us will cause any reader to doubt any military’s ability to do what it is supposed to do: make war.

We learn, for example, that the Chief of Staff of the German army, General Helmuth von Moltke, and the Chief of Staff of the French army, General Joseph Joffre, are opposite sides of the coin: Moltke, the character we would expect to be a fierce Prussian ranter, aggressive and blustery, is full of self-doubt and hesitancy and Joffre, whom we would expect to display the Gallic temperament and succumb to his passions regularly is as stolid – and, indeed, seemingly nerveless – as Mont Blanc. Sir John French, commander of the British Expeditionary Force, shows none of the British temperament for keeping calm and carrying on; he comes across as a flighty, skittish sort and his hesitancy in engaging in actual combat rivals the hesitancy of Union general George B. McClellan in the American Civil War.

With such a cast of characters at the top, the errors and counter-errors of their staffs, their field commanders, and their troops are not surprising. How, for instance, could could any military force as powerful and prepared in other ways as the Imperial German Army be so tone deaf as to think that their violation of Belgium’s territorial integrity would be accepted by the Belgians passively. How could they further think that their horrendously brutal reprisals against Belgians fighting back would make the Belgians “see the light” and become passive? How could the French believe that leaving their entire left flank thinly protected would somehow “work out,” as Joffre would say, while they engaged in a wildly misguided attack on the center of the German line? And did the French really believe that their troops’ cran (loosely translated as “guts”) would overcome superior German weaponry and training?

The answer, in both cases, is yes, they did. And in both cases they prove this observation by Tuchman absolutely, deadly, if you will, accurate:

Human beings, like plans, prove fallible in the presence of those ingredients that are missing in maneuvers – danger, death, and live ammunition.

I’ve said nothing of the Russians here because they are simply inexplicable. A people so gifted at using their own country’s geography and climate as a defense prove themselves about as incompetent on offense as it is possible to do. As a result, as history proved, their ruling classes brought both military and political destruction upon themselves. One could easily believe, after reading Tuchman, that the Russian Revolution began in East Prussia in 1914 when the Romanov army managed to turn near certain victory into crushing defeat. As Tuchman notes:

The excellence of The Guns of August comes not simply from both its detail and accuracy, which are obvious, but also from Tuchman’s ability to synthesize and summarize, as here when she gives us this about how World War I affected the psyche of those who endured it:

When at last it was over, the war had many diverse results and one dominant one transcending all others: disillusion.

It is a marvelous book and during this four year centennial of that first global conflict one should make every effort to read it. Parallels between those days and ours will rattle around in one’s consciousness during this reading. And in a real, uncomfortable way, reading The Guns of August will remind one of that French adage: