Like other classics of of what might be called pioneer literature, Louis Hémon’s classic of Quebecois literature Maria Chapdelaine conveys the love of a people for the land in a way that is beautifully simple and simply beautiful. 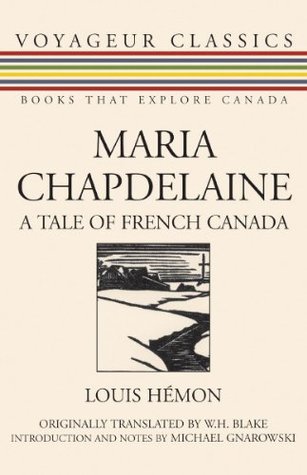 Maria Chapdelaine belongs to a noble tradition of what we can call pioneer literature. (It might also be called agrarian literature, but that term has come to be associated with the Fugitive Movement in Southern literature that began at Vanderbilt University in the 1920’s.)  Most readers have some experience with such books, especially in young adult literature – many have read at least one of the Little House books of Laura Ingalls Wilder or Lucy Maud Montgomery’s Anne Shirley series.

More mature – and sophisticated – readers may be familiar with works such as Sergei Aksakov’s The Family Chronicle or any of several novels by Willa Cather, particularly O Pioneers! or My Antonia. These are works that celebrate the difficult but rewarding lives of settlers, lives that are quietly heroic and which are tied to the rhythms of the land whether that land is on the Russian steppes or the American plains.

Maria Chapdelaine stands slightly apart from these other examples of pioneer literature for a couple of reasons.

One reason is that in the cases of both Aksakov’s and Cather’s works, successful settlement, taming of the land if you will, is the ultimate goal, while in the case of Hémon’s novel, mere survival of the harsh Canadian wilderness is the ever pursued, seemingly ever receding goal. The other reason is that, especially in Cather’s novels, immigrant integration into the land’s culture (i.e. “becoming American”) is portrayed as a worthy endeavor while in Maria Chapdelaine preservation of a separate culture (remaining truly French in a country conquered by Great Britain) is portrayed as equally worthy. Perhaps in that way this classic of French Canada shares a socio-political outlook with the American South as depicted by those Fugitive Agrarians I mentioned above.

The story is deceptively simple on its surface. A young Quebecois woman named Maria Chapdelaine lives with her family on the shores of Lac Saint-Jean. Her parents, Samuel and Laura Chapdelaine, have settled and developed a series of farms over they years, Maria’s father Samuel being driven by a restless spirit to move away from civilization as soon as he gets it established in a new region. The life is difficult and controlled by the seasons, especially the seven month long winters which can keep the family house bound.

Maria has three brothers, two of whom spend their winter months working in the timber industry, their summers helping their father clear land and expand the farm’s productivity, vital for the family’s survival and success. A younger brother and sister remain at home, as does Maria. The younger son helps his father with farm work year round and the daughters help their mother with the domestic work of the household. Maria is described as strikingly lovely in true Gallic fashion, a dark haired, dark eyed beauty pursued by a number of suitors.

In an interesting twist on what we might call the Austen formula, Maria is faced with choosing a husband who best suits her – and, we realize, best suits the needs of French Canada, i.e., Quebec. One suitor, a neighbor farmer named Eutrope Gagnon, is quiet, slow of speech, but utterly devoted to Maria and to the land. Another, Lorenzo Suprenant, has immigrated to the United States to work in a factory near Boston and offers Maria the excitement of city life – but would take her away from the land and culture of which she is clearly a symbol. A third suitor, a woodsman full of wanderlust and romance named, aptly, François Paradis, wins Maria’s heart. She seems certain to follow the path her own mother chose and marry a man with a restless spirit who will give her an adventurous but difficult (and in some ways wistful) life.

Alas, fate intervenes. François, in a reckless effort to pay a surprise visit to Maria at Christmastime, tries to travel from his lumber camp in a snowstorm and is lost in the wilderness. Maria’s heart is broken, but she is admonished by the parish priest to move on with her life. Both Eutrope and Lorenzo ask for her hand. She seems to have decided to flee Quebec – and the memory of the dark and dangerous forest that took her François – and embrace the diasporic experience with smooth talking Lorenzo when an event occurs that changes everything.

Just as spring arrives – the spring that would have brought her marriage to François – her mother is suddenly taken ill and dies within a few days. Watching her mother’s illness and death causes Maria to evaluate her mother’s life as a strong, loving Quebecois wife and mother and to realize that she, like her mother, is a strong, loving Quebecois woman first, last, always. A few weeks later, after her brothers have returned form the timber country and the grief of her mother’s death has been revisited, Eutrope shyly asks her to reconsider his suit. Just as shyly, but with a heart sure she is doing what is right for herself and for her people, Maria accepts him.

As I said, it’s a simple, heartfelt story. But what makes Maria Chapdelaine a classic is that simplicity. The deep faith and hearty character of the French Canadians depicted in the novel rings true in every page. And the language that describes the land and and the seasons is lyrically elegiac throughout, as in this lovely depiction of the coming of autumn (I offer the English for those who may not read French – je m’excuse):

Everywhere is autumn a melancholy season, charged
with regrets for that which is departing, with shrinking
from what is to come ; but under the Canadian skies it
is sadder and more moving than elsewhere, as though
one were bewailing the death of a mortal summoned
untimely by the gods before he has lived out his span.

And then there’s this description of Maria after she has decided that remaining in Quebec is how she can be true to both her mother and to herself:

The rain was pattering on the roof, and nature,
rejoicing that winter was past, sent soft little wandering
airs through the casement as though she were sighing in
content. Throughout the hours of the night Maria
moved not ; with hands folded in her lap, patient of
spirit and without bitterness, yet dreaming a little
wistfully of the far-off wonders her eyes would never
behold and of the land wherein she was bidden to live
with its store of sorrowful memories ; of the living
flame which her heart had known awhile and lost
forever, and the deep snowy woods whence too daring
youths shall no more return.

Maria Chapdelaine is a gorgeous book – poetic, heartbreaking, quiet, powerful. It deserves its place as French Canada’s great elegiac love song to itself.