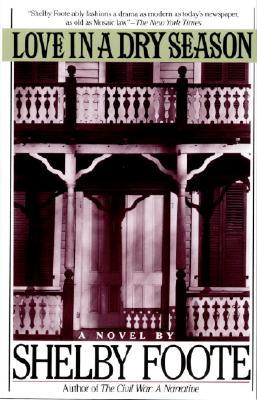 When I was writing the original draft of my novel The New Southern Gentleman, I had the ear (and the somewhat bemused interest) of a New York editor who was, I remember, working at that time for Henry Holt. He read a good chunk of the manuscript and recommended that I contact a writer friend of his, a fellow by the name of Walker Percy, even going so far as to send me Percy’s home address. I wrote to that estimable personage, author of a work I found influential, The Last Gentleman, and therefrom ensued a somewhat brief but memorable correspondence. One suggestion that Percy made I ignored – not out of disdain for the advice, which was excellent I now know, but out of what we might call “the anxiety of influence.” After reading several chapters of my manuscript, he recommended that I read “my friend Shelby’s book Love in a Dry Season.” (For those of you who don’t know, Walker Percy and Shelby Foote were best friends for 60 years.)

It was a sin of omission I have now corrected. My apologies, Mr. Percy, for delaying so long in taking your insightful advice. Love in a Dry Season is a marvelous novel, not just for its ability to compel you to read a novel about people you don’t much like, but, too, for its inherent grasp of how to convey what being Southern means.

So now, to help you understand this assessment, here’s another story.

The New Southern Gentleman, mentioned above, was also my dissertation. My chief advisor was the novelist Eugene Mirabelli, who said something very similar to me about my novel as I’ve said about Love in a Dry Season: “Jim” he said, shaking his head at me wistfully, “You’re going to have a difficult time getting people to like a novel whose protagonist is such a bastard. But I know better than to try to dissuade you. You clearly know something about the South that a Massachusetts guy like me will never understand.”

The novel concerns two families whose fates intertwine – the Barcrofts and the Carrutherses. As they should in a novel that examines the nature of Southern culture, especially the culture of the privileged classes, the former family’s money comes from cotton, the latter family’s fortune from tobacco. The link between the stories of these two families is a Yankee, a scoundrel and opportunist whose fine pigskin luggage does not disguise the fact that he is a carpetbagger in the classic usage of that term. The Barcrofts consist of a father and two daughters. Major Barcroft is a “cotton trader” whose inherited wealth and military school training make him a Southern gentleman of the old school. His daughters are Florence, an invalid, and Amanda, a Southern belle in the manner of Emily Grierson. When the Yankee, Harley Drew, comes to town (town is Bristol, Mississippi, a delta town much like Greenville, Mississippi, where the author grew up), he sets his cap at Amanda – purely for economic reasons. Her father is rich and Drew hopes to marry into their money. Major Barcroft sees through his mercenary scheme and dismisses him from the “permission to marry your daughter, sir” interview with a simple, telling question that Drew cannot answer: “What color are her eyes?” Having taken a liking to Bristol, and having found an old WWI buddy who gives him a plum job in the local bank, Drew takes up residence in the town to wait for the Major to die. In the meantime he continues to court Amanda in Victorian style, taking walks with her on first a weekly, then bi-weekly, then finally a monthly basis. It is a glacial process: the slow courting and countdown to the old man’s demise goes on for nine years in all.

Enter the Carruthers. Jeff and Amy Carruthers are cousins who have married, partly out of spite to their family, partly out of some sick emotional/psycho-sexual attachment. Jeff, heir to part of a North Carolina tobacco fortune, is a former standout college football player now completely in the hands of his wife Amy, a promiscuous beauty a few years older than he is. The reason Jeff is at Amy’s mercy (more like, lack thereof) is that he has lost his sight as the result of a car crash triggered by his reckless driving while the two were scrapping over one of Amy’s peccadilloes. Their presence in Bristol comes as the result of Any’s inheritance of a plantation near there – and sets the stage for the crucial actions in Foote’s novel. Nothing more likely to lead to disaster for the rich than the boredom of the bucolic life, we discover.

The Yankee Drew, a sexual libertine who, even as he has courted Amanda Barcroft has availed himself of a string of prostitutes, is seduced by, then, in what he admits is his greatest error in judgment, falls in love with Amy Carruthers. This love, ill-starred as it is, causes him to break off his relationship with Amanda just after her sister has died. Eventually the Harley/Amy romance leads to a murder plot – which doesn’t get very far because, having found out that his promiscuous wife and false friend are playing at the beast with two backs game, Jeff Carruthers shoots Drew (merely creasing his skull twice) and pistol whips Amy so severely that it takes major plastic surgery to restore her to a sort of plaster mask of her former beauty. In the meantime, while Amy Carruthers and Harley Drew are hospitalized, Major Barcroft dies. Drew is chagrined – though relieved – to learn that the bulk of the major’s fortune (nowhere near the amount gossip has it) has been donated to Major Barcroft’s military school alma mater. Amy has been left the legacy of a few thousand dollars and a small income from part ownership in a downtown Bristol building.

The Carruthers leave town, as does Drew, who finds success in Memphis by marrying an older widow of considerable fortune. The Carruthers, a pair straight out of a Fitzgerald novel, end up doing what the rich do: wandering from place to place and letting “other people clean up the mess they had made,” as Fitzgerald says of Tom and Daisy Buchanan. That leaves poor Amanda Carruthers who, in a pleasant twist on the Faulkner story referenced above, is able to sell her family’s cavernous house for a handsome price and takes up residence in the town’s new luxury hotel, free of Drew’s mendacity, free of Major Barcroft’s tyranny, able at last to eventually integrate herself in the town through her church work.

What makes all this remarkable is how well Foote is able to share, without condescension or self-righteous indignation, the preposterousness of nine year courtships and the imperiousness of old school Southern wealth and assumed gentility. The observers, along with the reader, of all these goings on, the townspeople of Bristol, Mississippi, offer a Greek chorus of gossipy continuity that the author is able to use to help us understand that some Southern characteristics – naivete, avoidance of exposure of truth, respect for rank and privilege far beyond its due – make the likelihood that stories like those told in Love in a Dry Season are not singular events. They are the essence of being Southern.

If you would understand the South, its charm and its maddening self-destructiveness, you need look no further than Love in a Dry Season.