When The Cloth Makes the Man: J.F. Powers’s Morte D’Urban

Catholicism is darkly comic in J.F. Powers’s Morte D’Urban – would that it were more comic, less dark, in the real world… 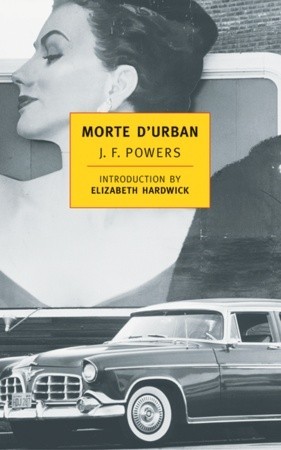 Well, this goes back yet again to Wufnik. He and I seem to bandy about the names of writers that we want the other to look into (often further into) on a regular basis. I did a piece a few weeks back abusing some schmuck who proclaimed “Rikki-Tikki-Tavi” the greatest short story of all time. In his comment on that piece, Wufnik mentioned a couple of stories: Shirley Jackson’s widely anthologized masterpiece “The Lottery” and “Prince of Darkness” by another unjustly neglected American master of literary fiction, J. F. Powers.

I’d read Powers’s story sometime ago (in fact, I’d read his first collection of stories, of which “Prince of Darkness” was the title work). So, thinking I should read it again given Wufnik’s high opinion of it, I promptly went out to one of my favorite used book sellers and looked for a copy of that collection. In doing so I came across, in addition to the story collection, Powers’s first novel, a National Book Award winner, Morte D’Urban. So I got both books. When I came to them in my always increasing reading list, I had to make a choice. Since my own first book, a “novel-in-stories,” is called Morte D’Eden, I decided to give the Powers novel a go.

There seems to be something of a renaissance right now for neglected 1st generation university based lit fic writers. Like John Williams, whose wonderful novel Stoner has seen a resurrection over the last decade or so (following the author’s death), so Powers’s Morte D’Urban seems to be enjoying some re-appreciation, too, given its re-publication following Powers’s death in 1999. While these glowing reassessments feel a little creepy given that both authors had to die to get them (which isn’t making me feel all that sanguine about getting any critical love while I’m still ticking), it is to the New York Review of Books credit that they are introducing new generations of readers to two superb writers.

Like Williams’s Stoner, Morte D’Urban is a quiet book about life in a reflective world – in the former case the university, in the latter a priestly order of the Roman Catholic Church. But unlike William Stoner, the title character of Williams’s novel, Father Urban, the main character of Powers’s work, is not the cloistered sort. He is a busy and popular “preacher and speaker,” as he describes himself, for the Order of St. Clement, the Clementines (an order Powers created for the novel), an order known best, it would seem for being also-rans:

It seemed to him that the Order of St Clement labored under the curse of mediocrity, and had done so almost from the beginning. In Europe, the Clementines hadn’t (it was always said) recovered from the French Revolution. It was certain that they hadn’t ever really got going in the New World. Their history revealed little to brag about—-one saint (the Holy Founder) and a few bishops of missionary sees, no theologians worthy of the name, no original thinkers, not even a scientist. The Clementines were unique in that they were noted for nothing at all.

Father Urban, however, is noted – and this, perhaps, is what leads him on the adventures that make up the action of Morte D’Urban. His success (perhaps a little too worldly for the taste of the order’s Midwest Provincial, located in Chicago which is Urban’s base) leads, the reader decides (the novel is told in limited third person from Father Urban’s point of view and the reader comes to understand quickly that he is an unreliable narrator most of the time), to his “banishment” to a rural outpost in Minnesota. There he contends with a fumbling senior priest, Father Wilfred, a diffident colleague, Father Jack, an avaricious bishop looking to take over his order’s facilities, and a conniving monsignor named Renton, all of  whom, in one way or another, seek to block Father Urban’s plans to “advance” the Church (and himself).  To work around these various impediments Father Urban makes a deal with the devil – in this case personified as an old friend and Clementine benefactor, Chicago businessman Billy Cosgrove. For a while it seems that Father Urban has the demon mastered and gains much earthly treasure for the order (and himself): a fine new office building for the order in Chicago, a golf course and complete remodeling of the order’s Minnesota outpost, even a nice Rambler station wagon. But, as is too often the case when one plays both sides against the middle, Urban ends up alienating his (and the order’s) benefactor, putting himself into compromising situations with attractive women (he is a true to his vows – nothing happens) that lead to hard feelings, and finally getting himself seriously injured by a conk on the head from a golf shot hit by the bishop who is angered that Urban has outmaneuvered him.

Between the bishops’s golf ball to the head rebuke and being forced to swim halfway across a lake to rescue himself when one of the women mentioned above leaves him stranded on a lake isle, Urban’s health nearly fails. He recovers, but is a much chastened and humbler figure – so that when he himself is elected Midwest Provincial he comports himself and conducts business for the order much more in the style of his predecessor who banished him to Minnesota. So the novel ends with the Church doing what the Church does – conducting business as usual with Father Urban, the man expected to revitalize and rehabilitate his order, doing what no one expected him to – continuing the tradition:

Seldom had a new Provincial so badly disappointed the hopes and calculations of men. Many changes in personnel had been expected, but there had been few,and strangely, the men regarded as most likely to be affected , as almost certain to get the boot, were spared.

The “message” of the novel – darkly, comically offered – is that Father Urban learns “true humility” and develops “true faith” by suffering. And that makes him worthy of the exaltation that he receives through his election to the post of Provincial. Undercutting that, however, is what we as readers recognize: Father Urban has tried to modernize his order as Pope John XXIII tried to modernize the Church via Vatican II. The stress of the modernization effort killed the latter; the stress of his own effort has killed the charming, urbane priest we’ve known for most of Morte D’Urban and left in its place a chastened, broken figure who thinks of St. Clement’s Hill, that frozen outpost in rural Minnesota, as home.

10 Responses to When The Cloth Makes the Man: J.F. Powers’s Morte D’Urban