Ben Ames Williams’s The Strange Woman and Art as Commerce…. 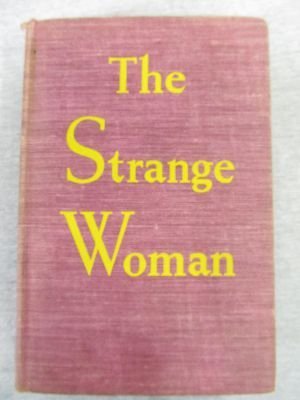 This essay concerns one of the novels of Ben Ames Williams. If you’re asking yourself “Who?” be assured that you’re not alone. A very successful “popular fiction” writer of the first half of the 20th century, Williams is almost forgotten now.  The novel we’ll be discussing shortly is called The Strange Woman and was published when Williams was at the height of his popularity.  The novel itself is…okay. The writer who produced it is fascinating as an example of a writer who made his creative decisions with a watchful eye to the market and whose oeuvre, as a result reflects that watchfulness – and whose literary reputation also reflects that watchfulness.

I have written on multiple occasions about the American reading public’s interests, partly because I have wanted to understand the literary marketplace better myself, partly because as a writer who now lives in the purgatory assigned to the vast majority of those who write “literary fiction,” I have often looked with envy at those who have been able to navigate the labyrinth of American publishing in ways that have given them great success – both popular and financial (let me note here that no artist is averse to making money, no matter how much he/she may protest that art should be an act of illumination for humanity and money be damned).  The larger, more difficult question in all this is a straightforward one: How does an artist, any type of artist, both stay true to whatever muse is being followed and find enough success – commercial? critical? – to feel validated enough to continue to pursue one’s work without lapsing into despair?

It is simple enough to argue, as literary fiction writers such as Edward Docx often do, that wildly successful authors such as Stieg Larsson and Dan Brown are not very good writers.  While this lack of writing skill may be demonstrable, it does not change the facts: the late Larsson and the very alive Brown have made enormous fortunes from their work and are widely lionized as writers.  One can, as Edward Docx did, note that the argument between literary fiction and popular fiction, especially genre fiction (after all, Brown and Larsson write thrillers of slightly varying types) is mostly a put-up job:

We need to be clear-eyed here because although there is much written about this subject, there is also much theatricality to the debate. And this serves to hide (on both sides) a fundamental dishonesty. The proponents of genre fiction are not sincere about the limitations even of the best of what they do while being scathing and disingenuous about literary fiction (there’s no story, nothing happens etc). Meanwhile, the (equally insincere) literary proponents say either: “Oh, don’t blame us, it’s the publisher’s fault – they label the books and we really don’t see the distinction”; or, worse, they adopt the posture and tone of bad actors delivering Shakespeare and talk of poetry and profundity without meaning a great deal or convincing anyone. Both positions are bogus and indicative of something (also interesting) about the way we talk of literature and culture more widely.

That last sentence gets at, I suspect, the heart of the matter. We live in a culture that has, especially in America, reduced all conversations to conversations about economic value. So perhaps the assessment of Ben Ames Williams’s The Strange Woman should take place in that context.

Williams’s novel is historical fiction (a genre work) set in Maine during the height of the lumber boom there. The “strange woman” of the title is Jenny Hager, a beautiful but twisted creature who, due to her dysfunctional upbringing (a mother who deserts her to fulfill her sexual desires and an alcoholic, abusive father), her own psycho-pathology (she learns early that her beauty and sexual allure give her the power to manipulate men for good or ill), and her Jekyll/Hyde struggle between her desire to be a good person and her demons makes the lives of her husbands, lovers, and children alternately happy and miserable. The novel covers some fifty years, from the time when Jenny’s mother deserts her (she is three) until her own death from (presumably) cancer some 50 years later.

The novel owes a significant debt to Margaret Mitchell. Jenny Hager is a more sinister Scarlet O’Hara – or perhaps a better description is that Jenny is Scarlet as seen through the eyes of a male author. Too, like Gone With the Wind, The Strange Woman is a long book (nearly 700 pages). Unlike GWTW, however, The Strange Woman is somewhat disjointed. Perhaps this is because Jenny Hager’s story is told in relation to a series of men, the first being the British lieutenant that her mother runs off with during the War of 1812, the last being her eldest son who, injured at Gettysburg, returns from the Civil War to help tend his mother during her final illness. In between are sections about her father, her much older first husband, his son, her stepson, who becomes her lover, her second husband (and the father of her four sons), and a local religious leader and family friend that she seduces in revenge against her second husband’s imagined infidelity (and by whom she has a daughter to whom she leaves her entire estate in order to humiliate that second husband who has been tirelessly faithful and loving to her despite her cruel, senseless rejection of him because of their disagreement over a political matter). All of this is relayed in a style that a critic being kind might call verbose. Williams explains when he should describe, and describes when action would convey his story line better. One wonders if he – or his editors – ever struck a line.

If The Strange Woman seems the stuff of a saga destined for the big screen – it was made into a movie in 1946 with the equally beautiful and strange Hedy Lamarr cast as Jenny Hagar. (It was the film that got me to go rogue on the reading list again and pick up Williams’s novel) The film covers only a small part of the novel – and makes some important changes to the plot. It would have taken a four hour epic like GWTW to cover all the story lines in Williams’s work. And while I’m no GWTW fan, Mitchell’s overlong opus is a much more coherent and compelling saga than Williams’ work.

Still, despite its disjointedness, it verbosity, its frustrating style,  The Strange Woman was a successful novel that became a successful film. Most writers would be thrilled with such an outcome for any of their books. I’m sure Williams was. He published more than 30 novels, several of which were made into movies (the most famous of these is the classic film noir Leave Her to Heaven whose main character, Ellen Berent, is pretty much a clone of the troubled character that Jenny Hager is). He was able to make his living entirely from being a writer. is novels vary little in style if they do offer some variety in substance.

And that circles us around to that question from early in this essay. Despite the theatrics in the arguments between those who argue about the worth of literary and popular fiction, there is a valid point at stake. Even the most famous of literary fiction writers (unless they have a blockbuster success like her or him) usually end up as writing teachers or in some other job to support their writing habits. Even though reading literary fiction makes one more perceptive and thoughtful, the reading public prefers reliable entertainment rather than insight.

That’s the economic reality. And,as is hammered into us from every direction, that’s the only reality there is.

6 Responses to Ben Ames Williams’s The Strange Woman and Art as Commerce….