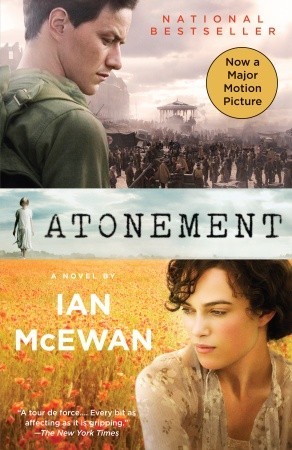 This essay about a work from my 2014 reading list looks at one of the most successful novelists of the last two decades. Ian McEwan has had a highly successful run as a commercially successful and acclaimed writer. His 2001 novel Atonement was short listed for the Booker Prize (England’s most prestigious literary award) and was made into a highly successful motion picture in 2007.

In most ways Atonement is a worthy novel. The theme, which examines the results of allowing one’s imagination to overpower one’s reason and senses, allows McEwan to examine the role of the artist in society and issues of class prejudice and family dysfunction. McEwan writes with both authority and skill and has a grasp of language that allows him at times to play with words (especially in his descriptions of the novel’s “writer” character, Briony Tallis, and her early forays into writing).

The plot of the novel owes something to other authors, particularly Graham Greene (one thinks of “The Basement Room,” Greene’s fine story that served as the basis for the excellent Carol Reed film The Fallen Idol). In a reversal of that storyline, McEwan has Briony Tallis, a child of 13 at the time of the novel’s major incident, hold the novel’s romantic lead, Robbie Turner, in a sort of snobbish didain based on his class background. Turner, the son of a Tallis family servant, has been sponsored to both grammar school (English prep school) and to Cambridge by Briony’s father. Briony’s older sister Cecilia, roughly Robbie’s age, has grown up with him – and has attended Cambridge with him as well.  As often happens in novels of class/manners in English literature, the two have long been in love without acknowledging their feelings. Briony’s childishly violent disapproval of their relationship – provoked by her discovery on the two in flagrante in the library of the Tallis home – leads her to commit an act of perjury against Turner that ruins not only his life but her sister’s. To compound the miseries associated with her act, her lie allows a rapist  to escape punishment and have a long, successful career in business – he even eventually marries his victim.

This is certainly powerful stuff – and for the most part McEwan handles it well. The tensions related to Cecilia and Robbie’s relationship that explodes into their passionate encounter, the attack on Lola, Briony’s 15 year old cousin by Marshall, a friend of Briony’s brother Leon, and Briony’s determined fixing of blame for the attack on Robbie Turner are both well conceived and executed. The same is true for the descriptions of Cecilia’s determined rejection of her family’s condemnation of Robbie and her eventual entry into nursing with the coming of World War II.

There are some points at which McEwan insists on having his characters muse too much – the musings of Emily Tallis, the mother of Cecilia and Briony, are a waste of pages. Robbie’s section of the novel, full of the character’s reviewing of his wrecked life as he participates in the Dunkirk retreat in 1940, goes on a bit too long but has power and pathos. The treatment of Cecilia’s musings – she is (or could be) the most complex and interesting character in the novel – is frustratingly short. She is a changed person after the twin shocks of her recognition of her love for Robbie and his arrest for sexual assault. While McEwan tells us about this, the novel would be more balanced had the space he gave to Emily Tallis’s musings on her life been devoted to her daughter’s – on her love for Robbie and her response to his life’s ruination by her sister.

The character McEwan is most interested in is clearly Briony – she is, after all, a writer, a manipulator of words – and people – as the author is. The section devoted to Briony’s nursing training (in imitation of her sister) – and how the war – and her witnessing the marriage of Marshall and Lola, a perverse legitimizing of his attack upon her – are meant to show Briony attempting to atone for her vicious and childish wrecking of both Robbie’s and Cecilia’s lives.

And then McEwan gimmicks us.

After Briony’s wartime section of the novel ends, we are thrust 50+ years into the future. Now an old woman who has had a successful career as a writer, Briony muses her way through several pages of reconsidering how her life has turned out. And we discover that the entire story we have been reading has been her memoir/autobiographical novel about Cecilia and Robbie. Further, we learn that the “ending” – an ending that reunites Cecilia and Robbie for at least a brief, happy interlude given the uncertainty of wartime – is fiction and that Robbie died on the beach at Dunkirk and Cecilia died a couple of months later in a London bombing raid. Basically, what McEwan asks of us is that we who have willingly suspended our disbelief to follow the novel’s narrative arc accept that we’ve been duped by a clever writer. It’s all been “a cock and a bull,” as Sterne says.

This gimmick – or trick, which is what it feels more like – undercuts the novel’s power. It’s an unnecessary twist.

I saw the movie version of Atonement and found the twist an interesting plot device. McEwan has been a screenwriter as well as a novelist, so it’s safe to assume he decided what worked for a screenplay would also work for a novel.

Only it doesn’t. It feels manipulative and gimmicky – and it spoils an otherwise very good piece of writing.

BTW – does anyone besides me think that McEwan has written a novel here for which watching the movie would be a perfectly adequate substitute? If you’ve read the book and seen the film, I’d love to have your thoughts on this question.