A confessions of sorts.

I have always been something of a fan of the historical novel. My interest began probably with Twain’s A Connecticut Yankee in King Arthur’s Court  in my early teens and has been primed occasionally over the years with the occasionally discovered tasteful or tasteless gem (many courtesy of my late and dearly missed Aunt Barbara). Through her taste for middle brow lit I wound up reading (without parental consent, of course) Forever Amber which led me to Moll Flanders and then to A Journal of the Plague Year (I’d read Robinson Crusoe years earlier as a child).  So in a weird way, the same woman who’d schooled me in serious lit by constantly forcing me to take another volume from the Harvard Classics  each time I visited her (she sometimes had me read from the works to her after I’d finished mowing her yard and was enjoying a glass of lemonade or iced tea) also, in passing along her old book club selections to my mother gave me an introduction into what Middle America found fascinating reading from the 1950’s through 1970’s. The great thing about this was that, prior to what Twain would describe as my transformation from cabbage to cauliflower, I read both Daniel Defoe and Kathleen Winsor as equals.

The historical novel that has been my guilty pleasure longest (so much so that when I lost my old, well marked copy from my Aunt Barbara I purchased another via AbeBooks) is a novel about colonial days in New Hampshire called Rivers Parting by Shirley Barker. Barker and her novel are both worth a a few moments consideration.

First a few words about Barker. A gifted poet, she won a Yale Younger Poets Prize while still an undergraduate. Her poetry collection, The Dark Hills Under was published by Yale with a foreword by Stephen Vincent Benet. A well meaning friend of Robert Frost sent him a copy. Frost, the beloved Frost, was a real bastard to other poets at times and viciously attacked not just the book but Barker personally. Interestingly, there is no record that they ever corresponded. Barker went on to earn an M.A. in English from Radcliffe and a library science degree from Pratt Institute and worked for many years at the New York Public Library.

She also became a novelist writing historical novels of which Rivers Parting is one. The novel is a page turner and involves the struggles of New Hampshire colonists to escape the grim control of Massachusetts Bay Colony as well as a love triangle involving the stalwart hero, a “New Hampshire man” as Barker calls him, a beautiful fair haired fellow colonist with whom our hero, Will Scarlock, has grown up, and a sexy dark haired tavern singer whom Will meets on a journey back to his father’s home in England. There’s a dash of sex, a dash of violence, some good historical background, and some truly poetic language:

Up in Seething Lane, Mr. Pepys put away his flageolet and scurried indoors, and down at Sayes Court, John Evelyn heard the shower on the sad leaves and rejoiced at it.London men went on about their own affairs, and the sand ran down a thousand hourglasses, bringing the world that much closer to the blessed time when it would not matter who loved whom and how they married.

Barker’s novel is full of this sort of writing. It’s a delight for anyone who appreciates a turn of phrase as well as a ripping yarn. I recommend that if you like historical novels that show off fine writing you should go find Rivers Parting and give it a go.

That brings us to Cold Mountain. 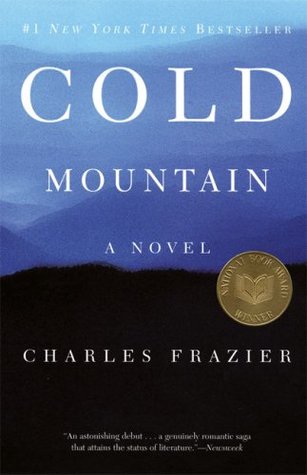 I wanted very much to like Cold Mountain. It has everything to recommend itself to me. It’s set in my home state of North Carolina and features NC mountain people like the work of those great NC authors John Ehle, Fred Chappell, and Robert Morgan. It claims to offer an alternative to the bodice ripping bullshit of those Civil War novels like Gone With the Wind.  Back when it appeared in 1997, I considered buying a copy. My late, oft lamented pal Chris (“O Lost, and by the wind grieved…” – that’s by another great NC author who writes about the mountains) warned me off the book: “I knew Frazier at Appalachian (State University), Jim. His book is not going to be your sort of thing.”

Chris, as he almost always was in his advice to me, was right. Cold Mountain is not my “sort of thing” even though I have a deep fondness for historical novels, NC authors, the NC mountains, and NC authors who write about the NC mountains. There are just too many problems with this book – in its present form, anyway.

It’s overlong and it’s tiresome. There are some beautiful moments, but the ending is – and I say this with all due respect (no, wait, with a complete lack of respect for the author’s choice given the genre and its true position as a middle brow historical romance) shit. Why this won the National Book Award is a mystery I cannot fathom. Isn’t that what the Pulitzer is for…?

The “overlong” criticism: Frazier tells two stories here – the story of how Ada Monroe survives on a small mountain after the death of her father via the help of a mountain girl named Ruby. Then there’s the story of Inman, a Confederate Army veteran from the NC mountains who, after being wounded at Fredericksburg, decides to return to his home – without the benefit of a formal discharge from the military. Either of these would have made a wonderful novel (I’d vote for the Inman story line – it has elements of the picaresque to it that hearken back to brilliant works like Simplicissimus, the great picaresque of the Thirty Years’ War by Grimmelshausen). The violence, pathos, comedy, and genuine absurdity of war and its participants  could have been further developed and a fine anti-war war story would have been the result.

The Ada Monroe story line is a quieter story of a woman being changed from a “frivolous,” if well educated Southern Belle to a strong, self-sufficient farmer. While I prefer the “Inman story,” this is a wonderful story, too, and the character of Ruby, a self-raised mountain girl who both teaches Ada about the land and how to love it and work it even as Ada helps broaden her understanding of the larger world by exposing her to literature, music, and art, could have been further developed and given us a rich tale about the life  of women on their own in the NC mountains.

Instead, we get a third story line, a romance between Inman and Ada that is tenuous at best, a kind of red herring at worst. In a 450 page novel Inman and Ada spend perhaps 50 pages together. The novel’s principal action consists of cross cutting chapters (not unlike Dickens or Thackery, i.e., just a tad creaky) of Inman’s journey home “to Ada” and Ada’s struggle to survive without the comforts of hired help as she (only) very occasionally allows a thought of Inman to cross her mind. One is reminded of the old cross cutting action of silent films first seen in The Great Train Robbery and perfected by D.W. Griffith in films like Birth of a Nation or Way Down East. Unfortunately, that is not what one should be reminded of when reading a historical novel from 1997 – 19th century serialized fiction like The Old Curiosity Shop or Vanity Fair and silent film storytelling that was cliched by 1920.

There is more to say here. The ruminations that Inman and Ada Monroe have (and there are many, though not so many about each other as one would expect) slow down the pace of the novel and sometimes wander off into philosophical thickets from which neither character nor reader feels he/she will emerge. Here’s Inman on war, for instance: “The endless arc of the sun, wheel of seasons. War took a man out of that and made a season of its own, not much dependent on anything else.” And Ada on literature: “…she had long grown impatient with Adam [Bede] and Hetty and the rest and would have quit the book…. She wished all the people of the story to be more expansive, not so cramped by circumstance.”

Finally, at the very end of the novel Inman and Ada are reunited. They have a few days (and nights) together and then Inman is killed – needlessly – by a sociopath Home Guardsman who is a mere teenager. After a long, long journey, many struggles by both characters, and a reunion that moves from tentative to passionate to mature within about ten pages, Inman is gunned down. Ada, of course, has become pregnant from her brief romantic interlude with Inman and the last scene we see is Ada back at her farm with her (and Inman’s) nine year old daughter;  he friend Ruby and her husband (a character introduced so late in the book we barely know his name); Ruby’s once dissolute, now somewhat reformed father; and Ruby and her husband’s three sons.

Far from satisfying – maddening, in fact – but all tied up with a bow.

There are other issues to take up with this novel such as its undercurrent of anti-intellectualism that undercuts “book larnin'” with the “profounder wisdom” of knowing under which sign to butcher a pig or the subtle suggestion that  “mountain fiddlin'” is an art form far superior to playing the piano. But these, perhaps, are author biases that, while grating, fall under the “grant the writer his ground” rubric.

It is a hard and perhaps disconcerting thing to say, but Cold Mountain should have been a longer book. Frazier could have had the room to develop the story line of what happened after Inman returned and given readers a much more satisfying end. In truth, what Frazier had in Cold Mountain was the opportunity to write an epic akin to War and Peace about the American Civil War. Instead, whether under pressure from his editors or by his own design, he gave us a middle brow historical romance with a rushed and disappointing ending.