Hugh Howey’s Wool: Utopia for the lovers of Dystopia…

Wool is a smart, interesting take on the dystopian novel. It’s also kind of frustrating in that “wait for the next book to find out” way…. 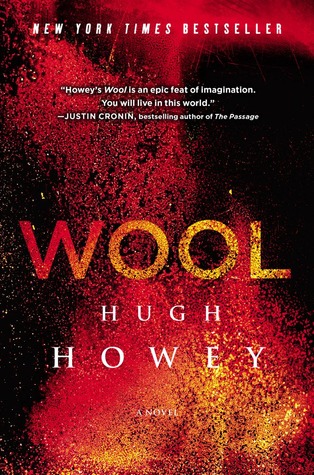 My local library, a vibrant place of reading, thinking and culture in my community, which I support wholeheartedly in spite of reassurances from the likes of the Google boys and Jeff Bezos that such places are no longer necessary, has been having its annual community read during the month of June. This year’s read has been the bestselling dystopian epic Wool by Hugh Howey.  (Yep, I’m off the 2014 reading list – and its revision – again, though I keep adding the books that come across my desk to that ever expanding list so that’s not strictly true, I guess.) One of the neat things associated with this community read has been community “read-alouds“; groups have been meeting in different spots across the area to read from the novel and discuss the action. I participated in a read-aloud last evening. The nicest thing about the group was the age range – from middle schoolers to a crusty old writer/professor. We had a great time doing a  dramatic reading of the events from one section of this sprawling work. This is wonderful stuff in a rural community like ours and the mix of younger and older readers both sparks hope for the future in this particular reader and, I hope, provides those younger readers with role models and will encourage them to develop a life-long love of reading.

And that, I suppose, covers the Utopian vision part of this program. As I mentioned in my most recent essay, the first decade and a half of the current millennium has been characterized by a powerful – and not completely explicable for this writer – reader fascination with dystopias and apocalypses. Wool is certainly a beneficiary of this interest, and it is in some ways a classic example of this genre. It is also, as best I can determine, the first in a series of works Howey plans to offer readers about this dystopian world where people live in underground silos that are both physical and metaphorical.

Wool depends upon the use of a number of extended metaphors (known as conceits in my line of work, though driving a metaphor through the 14 lines of a sonnet is quite a different thing from using one as gloss in a 500+ page novel). The most obvious of these conceits (and perhaps most important, at least for the author) is the comparison of life in a dystopian silo to the craft of knitting.  Major sections of the novel have the subtitles “Proper Gauge,” “Casting Off,” and “The Unraveling,” all terms related to knitting (or so I am told). The section titles also serve as foreshadows of the nature of the novel’s action at these various points and thus give the readers cues about what to expect.

Other metaphors extended throughout this saga include levels of the silo compared to levels of social rank. Another comparison that runs through much of the novel (which is not a conceit, more an analogy) is the comparison of the heroine, a “mechanical” from the lowest level of the silo (by her own choice, it should be noted) whose name, Juliette, is shared with the main character of Shakespeare’s play – and which glosses the subplot of the novel’s heroine and a pair of “star-crossed lovers,” one dead, one living, she is involved with in the course of  the novel. Lines from Romeo and Juliet serve as epigraphs  throughout one section of the book (one wishes Howey had used this device throughout the novel if only for consistency’s sake).

The plot of the novel is breathtakingly simple – a series of silos set up by people far in a planet’s past (the suggestion that this planet is Earth is less subtle than the author might believe) due to impending environmental/ecological disaster (whether this is from nuclear winter, global climate change, or some other source is left ambiguous) are inhabited by societies whose social castes are determined at least in part by their place in the silo’s architectural structure. “Mechanicals” (those who keep the silo’s air, water, heating, cooling, etc., operational) are the lowest level, government and technocracy the highest. Adherence to codes, pacts, principles of order are ironclad and enforced by banishment into the hostile and toxic world outside the silo in a process called (with heavy metaphorical suggestion) “cleaning” – a process that entails having the condemned clean sensors that broadcast views of the hostile outside world as well as, in that metaphorical sense I mentioned, “cleaning” the silo of troublemakers – those who would question the efficacy of such a rigid and hierarchical system. Periodic uprisings by the oppressed are quelled in efficient and murderous fashion by those with mastery of greater technology. Wool, the first book in a series (naturally), looks at an uprising that occurs as a result of a failed cleaning – and the possible, merely possible, we should note, change that the resolution of that uprising may bring to at least one silo.

Howey owes a great deal to his predecessors in the field of dystopian literature. There are elements of both Orwell’s Nineteen Eighty-Four and Huxley’s Brave New World in play here. From Orwell comes the demand for group think and the enforcement of rigid penalties for even the hint of dissent. From Huxley comes the rigidly hierarchical social structure and the exposure to a possible alternate social structure (Juliette’s experience visiting another silo allows her to rethink the possibilities of silo life much as Bernard’s visit to the Reservation causes him to rethink his own society’s structure in Huxley’s novel). The name of Howey’s “villain,” Bernard, is the same as the name of Huxley’s “hero,” Bernard in Brave New World. (I use the quotes because in dystopian scenarios heroism and villainy are, at best, somewhat problematic).

But there are other influences, too. To an interesting degree, the actions of the “mechanicals” and their struggle for social acceptance by their “betters” (in Wool, the technocrats) echoes the plot of Fritz Lang’s great expressionistic sci-fi film Metropolis. Even the perversion of religious faith (the use of religious leaders to sanction injustice and inequality by a false definition of communal need) reminds one of Lang’s film in that perversion of the peace message to endorse unfairness is a plot element of both works. The casting of those in charge of information as the bad guys (the villain and his henchman run the silo’s IT division) recalls dystopian cinema of more recent vintage such as The Net.

But in Wool, the role of IT (shorthand in common parlance for Information Technologies) is more complicated than in that interestingly terrible Sandra Bullock film – both more sympathetic in some ways (Bernard and his cohort believe that they are preserving their civilization and culture to the best of their abilities) and more sinister (Howey hints at, whether he realizes it or not, at least some familiarity with Neil Postman’s technopoly hypothesis – blind slavery to the technology that sustains them is clearly suggested to be a root cause of the evil that Bernard and company do).

There’s an element of the Luddite in Wool, also. Howey clearly suggests, whether he means to or not – that those who can keep the world running – the “mechanicals” – are probably more valuable than those who serve technology. The bridge figure in this scenario – Lukas – is an engineer in IT. He works on hardware; he is not quite a “technocrat,” not quite a “mechanical.” He is also the living male in Juliette’s star-crossed love triangle. His wavering between technopoly and something approaching democracy is a key plot device – and eventually triggers the resolution, such as it is, of the novel.

The ending is unsatisfying – will Juliette accept leadership of her silo? Will the sheriff – once Bernard’s pawn, now, at least in Lukas’s estimation, a “good man,” accept or oppose Juliette’s ideas for a more open, more egalitarian social structure in the silo? One realizes (with a sigh from this reader, btw) that Howey has purposely left these questions unanswered to set up the next volume in his series. Other readers evidently don’t feel my disdain for this overt manipulation. Well, as Edward Lear reminds us, “such, such is life….”

This brings up my chief complaints about Wool. Howey is a very competent writer with real talent. But, and I have complained about this with his currently more illustrious contemporary in fantasy literature, Neil Gaiman, it seems that he is manipulating his work in order to set up a sequel. In this I feel he sells himself – and the serious reader – short. It is difficult to make the argument that genre literature such as science fiction and fantasy will ever reach the levels of literary fiction if its practitioners make conscious decisions to pull back from making more powerful individual literary statements in order to draw the reader to another volume in their trilogies/tetralogies/pentalogies, ad nauseum. There is, as I understand it, some tradition in science fiction and fantasy literature of epic story arcs. But I believe that sometimes this is a liability. Okay, you want to write the dystopian equivalent of War and Peace. Why not just go for it and give us 1000-1200 pages with an ending as complete and satisfying as Tolstoy offers? Readers will stay with you.

But your publishers might not, I guess. See the Lear quote above.

So, in sum, reading Wool offers me some of the same frustrations as other books I’ve read that are part of the “series mania” that currently grips genre fiction. But the book offers a smart, interesting take on the dystopian novel, too. That makes it worth the reader’s while.

6 Responses to Hugh Howey’s Wool: Utopia for the lovers of Dystopia…