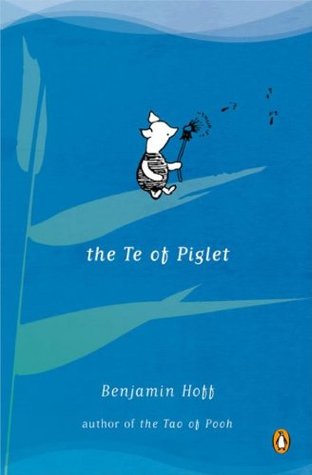 The Te of Piglet by Benjamin Hoff (image courtesy Goodreads)

As I make my way through Anne Bronte’s The Tenant of Wildfell Hall (which has proven to be a slower read than I’d hoped), I offer here a review of one of the sort of books that proliferated beginning back in the 1980’s once the conglomerates got hold of publishing and began looking for “hits”: books that would find success through a clever writer’s ability to find “buzz.” That elusive quality called “buzz” has nothing to do with a book offering anything of value – it has everything to do with a book being able to capture cultural zeitgeist  – and, as a result, generate big sales numbers. Because we all know, the meaning of life is how much money anyone’s actions are capable of generating. Am I right?

Well, of course, I’m not. Sometimes a book captures  the zeitgeist despite the fact that the elevator pitch might make a decision maker either a) shrug the shoulders in indifference or b) dismiss the pitch as “won’t generate revenue” or “already done.” Of course, there might be the rare occasion when response c) “intriguing – let’s run some numbers” occurs. Whether Ben Hoff’s agent got either reaction a or b when his first book on the Tao was pitched, I am uncertain. He did get response c eventually and the result was the wildly popular The Tao of Pooh. That book, which used A.A. Milne’s beloved character Winnie the Pooh to explain Taoist philosophical concepts, is characterized by observations such as this one:

Abstract cleverness of the mind only separates the thinker from the world of reality, and that world, the Forest of Real Life, is in a desperate condition now because of too many who think too much and care too little. In spite of what many minds have thought themselves into believing, that mistake cannot continue for much longer if everything is going to survive. The one chance we have to avoid certain disaster is to change our approach, and learn to value wisdom and contentment. These are things that are being searched for anyway, through Knowledge and Cleverness, but they do not come from Knowledge and Cleverness. They never have, and they never will. We can no longer afford to look so desperately hard for something in the wrong way and in the wrong place. If Knowledge and Cleverness are allowed to go on wrecking things, they will before much longer destroy all life on this earth as we know it, and what little may temporarily survive will not be worth looking at, even if it were possible for us to do so.

“Knowledge and Cleverness” in this instance refers to intellectualism (personified by Owl) and capitalism/greedy self-interest (personified by Rabbit). Pooh, whom Hoff argues personifies the Taoist concept wu wei (effortless doing), can serve as a role model for those who would embrace Taoist ideals and overcome the dangers of over-thinking and over-doing that plague Owl’s and Rabbit’s efforts at managing their affairs. Think of it as a version of “letting the game to come to you,” as the sports analogy would have it. Overall, it’s a charming little book that, while Taoist scholars might quibble over Hoff’s liberties with the complexities of Taoism, offers a gentle introduction to a profound school of philosophy.

The Te of Piglet is meant as a “sort of sequel” to the Pooh book. Hoff’s aims seems to be to show that even those who see themselves as “small” (unimportant, ineffectual), as Piglet, are capable of doing important things:

“It is very hard to be brave,” said Piglet, sniffing slightly, “when you’re only a Very Small Animal.”Rabbit, who had begun to write very busily, looked up and said: “It is because you are a very small animal that you will be Useful in the adventure before us.”

In the story that unfolds, Piglet is indeed able to use his small size to very positive effect. And Hoff is able to demonstrate through him the Taoist concept of Te (virtue, a powerful force). That much of the book is similar to The Tao of Pooh is both its charm and its ability to give a gentle introduction to more of Taoism’s concepts.

But there’s much in The Te of Piglet that feels forced – and bitter. The forced part is Hoff’s expansive – and sometimes digressive – ruminations on various topics, including the Mahatma Gandhi:

Wherever Gandhi went, he transformed situations and lives. As one friend and biographer wrote, “He…changed human beings by regarding them not as what they thought they were but as though they were what they wished to be, and as though the good in them was all of them.

It’s a nice description of the great man, but its relevance to both Taoism and to the narrative is shaky.

The bitterness drifts in when Hoff allows himself to move towards the political and away from the philosophical, as here when he describes the “age of perfect virtue”:

In the Age of Perfect Virtue, men lived among the animals and birds as members of one large family. There were no distinctions between “superior” and “inferior” to separate one man or species from another. All retained their natural Virtue and lived in the state of pure simplicity…In the Age of Perfect Virtue, wisdom and ability were not singled out as extraordinary. The wise were seen merely as higher branches on humanity’s tree, growing a little closer to the sun. People behaved correctly, without knowing that to be Righteousness and Propriety. They loved and respected each other, without calling that Benevolence. They were faithful and honest, without considering that to be Loyalty. They kept their word, without thinking of Good Faith. In their everyday conduct, they helped and employed each other, without considering Duty. They did not concern themselves with Justice, as there was no injustice. Living in harmony with themselves, each other, and the world, their actions left no trace, and so we have no physical record of their existence.

Leaving aside the obvious question (If those from the “Age of Perfect Virtue” left no trace, how do we know about them?), Hoff’s description of this lost “perfect age” leads him into later rants against education methods, environmental mistreatment, and, somewhat strangely given his other views, feminism. While he ostensibly ties these ruminations to various characters (poor Eeyore is somehow responsible for political correctness in speech, for example), mostly one gets the feeling that Hoff is simply complaining. Not that there’s anything wrong with complaining – but it gets in the way of the very positive message of Piglet’s Te….

Still, The Te of Piglet has, like its predecessor, numerous golden moments. And it offers some fine advice:

When we give up our images of self-importance and our ideas of what should be, we can help things become what they need to be.

Those are words worth contemplating. One wishes that in writing The Te of Piglet that Benjamin Hoff had contemplated them a little more.