“I am an Anti-Christ/I am an Anarchist…” – John Lydon 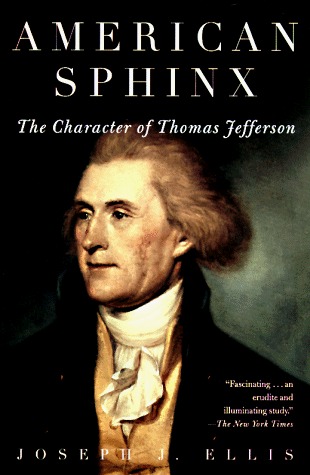 Joseph J. Ellis’s excellent study of the character of perhaps the most beloved and certainly the most enigmatic member of that group that we think of as the Founding Fathers, is called, aptly, American Sphinx: The Character of Thomas Jefferson. Ellis’s work is not a biography of Jefferson (he readily admits that there are thorough multi-volume treatments of  Jefferson’s life that are, for all intents and purposes, definitive). Ellis tries – and in large part succeeds – in pursing another, certainly elusive, goal: an explication of Jefferson’s character.

Like any human, Jefferson was a person of contradictions and inconsistencies – as Ellis illuminates in this work. What originally attracted Ellis to this project, it seems, was not the desire to point out Jefferson’s flaws but instead a sincere desire to understand how, in spite those inconsistencies and contradictions, Jefferson has long been and remains (with the possible exception of Lincoln) the most popular icon of American political thought.

After a “prologue” that both puts Jefferson’s popularity into a contemporary context and offers readers Ellis’s rationale for writing yet one more book about the most written about of the Founding Fathers, Ellis devotes longish chapters (divided by subheadings into discussions of various events that help illuminate the Jefferson character) to the places of significance in our third president’s life: Philadelphia, where he wrote the Declaration of Independence and made his name; Paris, where he learned about diplomacy, romance (and perhaps Romanticism), and fine dining/living; and finally,Monticello, the place he always claimed he longed to spend all his time, where he subtly (arguably deviously) prepped himself for his rise to the Presidency; Washington, D.C., where he, like so many presidents after him, triumphed during his first term, floundered during his second; and Monticello again where he spent his twilight years entertaining friends and increasing numbers of pilgrims desiring to see an American icon; wrote enormous numbers of letters – including carrying on a remarkable correspondence with his counterpart in political thought, John Adams, which both men used at times to justify their places in history; and founded a university he hoped would rival the great seats of learning of Europe – the University of Virginia.

As Ellis points out, and justifiably so, each of these periods of Jefferson’s life and career illuminate his character in ways that are both admirable and problematic. His greatest piece of writing, the Declaration of Independence, was a work edited and amended by both the committee he was part of (which included both Adams and the estimable Benjamin Franklin) and the Continental Congress at large. What is first revealed in this section is that Jefferson saw himself first and foremost a writer (his oratory abilities were poor, actually). And like most writers, he found feedback, especially criticism, painful. We learn that Jefferson, the revered statesman, has the soul – and ego – of an artist. In the Declaration itself what emerges as “Jeffersonian” is extreme idealism about human ability to live harmoniously under natural law (what’s interesting is that Ellis never mentions any connection between Jefferson and Rousseau even though Jefferson’s idealization of agrarianism and Native Americans – people living free under natural law – is quite Rousseauesque). For Jefferson, the idealistic vision he expresses so eloquently in the Declaration – people’s right to pursue life, liberty, happiness unfettered by government imposed constraints – never really changed throughout his long life and career.

Paris gave Jefferson – though Ellis never says this explicitly either – exposure to Romanticism – a cultural view quite congenial to his personal politics. Jefferson spent his years in Paris engaging in a doomed love affair (a dose of good old sturm und drang), counseling (too idealistically and thus pointing them toward failure) Lafayette and his allies who were trying to bring France to American style democracy via a moderate route, and complaining to Madison (his best friend, confidant, and the document’s chief architect) that the Constitution being developed at home in Philadelphia contained too many constraints on individual freedom. What Ellis notes about Jefferson during these years is that he never quite reconciled his idealized vision of humans living free and somehow getting along peaceably without oversight with the realities of any nation-state’s need for coordinated policies on both foreign and domestic issues. Jefferson, Ellis argues, was in some real ways a benign anarchist.

The Washington years – Ellis focuses on the first term triumphs and only briefly mentions the second term failures in the last chapter – are interesting in two respects. The first is that Jefferson’s executive style was to conduct the business of governing almost exclusively by document (suited to a writer, certainly, if not exactly congenial to a politician trying to govern). The second is that Jefferson’s avowed goals as President were very similar to those of – well, Tea Party Republicans. He preferred a system of small federal government and he would have preferred even more that small government dominated by the House of Representatives as closest to “government by the people.” He detested the federal judiciary and its ability to gainsay government policies and practices – and it is sublimely ironic that his chief justice (appointed by his rival John Adams) was the great defender of federalism John Marshall.

While Jefferson’s achievements in his first term are impressive (he largely paid off the  federal debt, for example), his greatest triumph, the Louisiana Purchase, was probably an extra, likely unconstitutional, act. The purchase offered, in Jefferson’s mind, a way for “the people” (again Jefferson’s idealization of natural men living in agrarian Eden) to escape the burden of (particularly federal) government control simply by moving west. Our nation’s greatest land expansion might then be seen as an act of (benign) anarchic defiance of constitutional government.

The long twilight of his retirement to Monticello after his presidency (nearly two decades) gave Jefferson what he always wanted – time for reflection, time for “tending his own garden” (though he was lousy at this – he died heavily indebted and even with the sale of all his properties, his slaves, and Monticello itself his heirs were still left heavily in debt), time for defending his record and securing his place in history. His success in that last endeavor is where Ellis notes a mixed result – and draws ire from some critics.

– The Philadelphia era Jefferson was a staunch supporter of emancipating America’s slaves. While admirable in principle (remember Jefferson was ever the anarchic idealist), as a Virginia planter success in this cause would have certainly brought him financial ruin. The older Jefferson (he of the post Paris years alternating sojourns at Monticello between terms as Secretary of State under Washington and Vice-President under Adams) quietly ended his overt opposition to slavery. In fact, as Ellis notes, near the close of his life he ended up on the wrong side of history in the debates that led to the Missouri Compromise.

– Jefferson’s opposition to the Constitution, which both Adams and Madison tried to reason him out of, was wrongheaded – and actually suggests that perhaps Jefferson did not understand either that seminal American document or the need for it. Ellis attributes this almost willful disregard for “the law of the land” (as noted above, his greatest Presidential achievement, the Louisiana Purchase was, at best, extra-Constitutional and more likely unconstitutional) as more evidence of the idealistic (and benignly anarchic) thinking that made the Declaration so poetically inspiring. Jefferson prized individual freedom more than perhaps any other Founder – though his tendency to think of such freedom in abstract philosophical terms was, as Adams often reminded him, impractical. One comes to think of Jefferson as a man both brilliant – and self-deluded – enough not to allow anything as silly as the law get in the way of a good idea.

– Finally, there is the matter of Jefferson’s religious convictions. Though we now think of him as a Deist (as were his contemporaries Franklin, Madison, Hamilton, and even Washington), Jefferson smarted under attacks by his political enemies who claimed he was godless. Jefferson defended his religious beliefs on multiple occasions and identified himself as a firm believer in the teachings of Jesus (like any good politician, Jefferson could parse language cleverly).  His defense of himself, of course, also proposed religious freedom for the individual – and separation of church and state. It might be his most enduring legacy. And it offers further proof of his determination that even religious belief was an area where individual freedom must reign supreme.

What Ellis gives us then in American Sphinx is a complex portrait of a man who was capable of arguing for human freedom while owning slaves, supporting democratic republicanism while opposing government, objecting to foreign influence while preferring French cuisine. Like most brilliant people, Jefferson had a character that is hard to encapsulate.

Perhaps a quote from another contemporary, William Blake, describes Jefferson’s enigmatic nature best: “Without contraries is no progression.” Jefferson’s “contraries,” as Ellis points out, gave us a vision of America as a haven for the individual to be truly free that we still treasure – no matter what our particular political persuasion. Perhaps that explains, at least in part, the enduring reverence he enjoys.