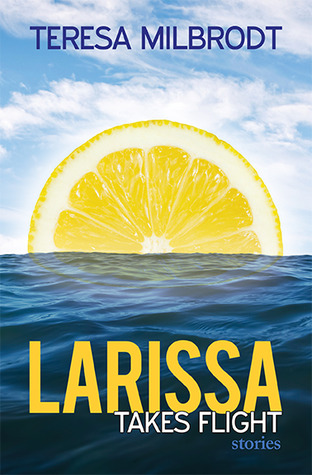 The always interesting Teresa Milbrodt’s latest story collection, Larissa Takes Flight, is what the publisher calls a “pastiche novel.” I know something about these having published a couple of my own,  so I feel relatively qualified to ramble on a little about this work in my own inimitable, if slightly eccentric style.

Larissa – and her adventures – cover two wide swaths of American culture: Milbrodt’s own special blend of the mundanity of  current American life with the epic (or, perhaps, mock-epic) and fabled which one writer colleague has called “Midwestern Mythic” as well as the author’s take on life as part of that sociological group we most often see referred to as “Gen X.”

In fact, there aren’t many social, aesthetic, or personal issues of our time on which Larissa does not express an opinion. And that’s what Larissa Takes Flight really is. In its own weirdly delightful way, it’s much like reading essays by Sir Francis Bacon or Michel de Montaigne: the “stories” aren’t so much stories as anecdotes (homilies?) or illustrations of points that Larissa (and, one assumes, the author) want to make about life in early 21st century America. Larissa comments on the proliferation of books/movies/TV shows about zombies and vampires – and what our culture’s current obsession with those mythical figures says about us. She holds forth on what the dead might have to say to us should they be able to communicate. And Larissa pontificates on subjects that Gen Xers like to pontificate about: why she doesn’t want children, why coffee is okay but soda pop isn’t, why taking online tests is a perfectly acceptable way to predict romantic happiness.

As you’ve guessed by now, Larissa is like the rest of us – all over the place and a bit of a mess from time to time. And that’s the real attraction – and importance – of Larissa Takes Flight. It’s a reminder to us that we all want to soar. We, as Larissa tells us in the title story of this collection, simply have to find our proper vehicles.

Oh, and that “saving the world is like selling shoes” thing? Well, then. Perhaps you should read the book.