Christine de Pizan – and Whatever Medieval Feminism Is…

Maybe feminism isn’t all that recent as a social movement – or, “we built this city on women’s roles…” 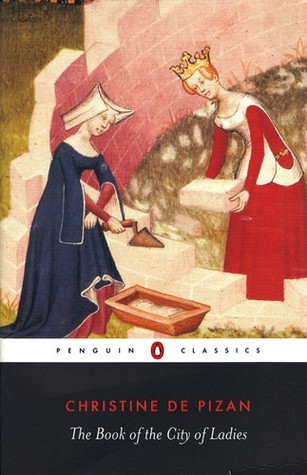 One of the tendencies of modern scholarship has been to “re-interpret” texts from other historical eras in light of modern (or postmodern – or post- postmodern) sensibilities. My most recent completed work from the 2014 reading list (I’m a little behind now due to some family matters) is by 14th/15th century author Christine de Pizan. The Book of the City of Ladies is typically medieval. Its author uses much material from “other sources” – which is medieval-speak for “borrowing” freely from both classical and contemporary sources – and the work is itself allegorical – the “city” of the title is actually de Pizan’s book.

The premise of the book is, however, anything but medieval. Christine de Pizan explains that she is “building the city” at the behest of three virtues (all represented in feminine form, of course): Reason, Rectitude, and Justice. These virtues – which are cardinal virtues of women, Pizan is subtly arguing – have appeared to Pizan in a dream in order to help her defend the intelligence, honor, and integrity of women. Women’s intelligence, honor, and integrity have been maligned, primarily, Pizan explains, at the hands of two groups of men – theologians and courtly romance writers. Theologians, despite their elevation of the Virgin Mary to a status nearly equal to that of Christ, primarily depict women as the source of mankind’s trouble dating back to the original troublemaker Eve. Courtly romance writers such as Jean de Meun in Roman de la Rose portray women primarily as sexual objects – creatures to be used for male pleasure and amusement with little or no thought given to their sense or feelings.

The Book of the City of Ladies addresses these unfair and demeaning portrayals of women by constructing a history – social, religious, familial – of women. Reason offers a long list of brief biographies of women “both pagan and Christian” who disprove the presentation of women as venal and thoughtless creatures who are hindrances to their mates; indeed, Reason’s examples include a glowing description of the culture of the Amazons, that likely mythical realm populated solely by women of intelligence, courage, and virtue. Rectitude’s contributions include biographies of the goddess Juno (Hera), patroness of marriage, as well as discourses on women’s steadfastness and loyalty – and examples of fickleness and inconstancy in men. Justice completes the “building” with a series of hagiographies of female Christian martyrs who chose being brides of The True Church to earthly marriage despite often cruel treatment by fathers, brothers, or guardians.

There is inconsistency. Reason describes Dido as a women of great sense and intelligence who rules wisely – though Rectitude uses that same Queen of Carthage as an example of one who loves not wisely but too well. Rectitude goes to some lengths to show how women’s virtue is as attractive to men as their beauty. She then defends the right of women to take lovers if their “youth and beauty” need tending – and to take revenge on male relatives who might seek to punish either lady or lover for such behavior. Justice both commends and condemns conjugal relationships (indeed, if the examples Justice touts were emulated by all women, Christians would be as scarce as their subgroup the Shakers).

Still, in the face of much prejudice and plain old ignorance about women – their characters, their intelligence, their importance to society – Christine de Pizan offers a spirited defense of medieval women’s virtue, integrity, and brains. More than that, as one of literature’s first important women authors, de Pizan not only talked the talk, she walked the walk. She was herself an important building block in the “City of Ladies.” Both the author and her “city” are a tribute to the independence, intelligence, and integrity of women, not just of her era, but of any era.

4 Responses to Christine de Pizan – and Whatever Medieval Feminism Is…