An Insider’s Guide to Publishing, or why would anyone want to be a writer?

“Mad, bad, and dangerous to know” applies not just to Lord Byron but to every writer… 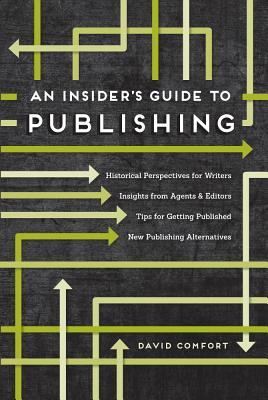 David Comfort’s latest book, An Insider’s Guide to Publishing, is not the “nuts and bolts” sort of a book you’d expect from its title. Instead, Comfort has written a longish (nearly 300 pages) compendium of anecdotes, explanations, analyses, and observations on writers and writing, the publishing industry past and present, and the role of technology in that past, present, and future of literature.

By the time Comfort gets to this, however, he’s covered a lot of ground. We know stuff such as the following:

* John Milton got £5 payment for Paradise Lost – which cost him, as you may have heard, his eyesight;

* William Faulkner’s literary agent had to lend him $100 so he could pay his electric bill and not have his power shut off;

* Edgar Allan Poe got kicked out of West Point for showing up for dress parade sans dress;

The book is divided into several sections.

The most interesting for many readers will be the first which gives a history of American publishing over the last 100 years or so, covering the transition from publishing houses such as Putnam, Charles Scribner and Sons, Harper Brothers, and Random House from genteel concerns owned and operated by wealthy, cultured families with an interest in both publishing works that would make some money and (something they considered equally important) publishing works they thought moved literature forward. So it comes as little surprise that Comfort reminds us that this was American publishing’s “Golden Age.”

The takeover of these concerns began in the 1980′s (Does everything about the destruction of American culture go back to Reagan? Why yes, yes it does) by large conglomerates who changed the ethos of publishing from that of a genteel desire to both make a little money and elevate our arts culture to our all too familiar corporate ethos of “make all the money it is possible to make no matter what kind of dog shit you must purvey to do so and elevating our artistic culture be damned.”

In other words, it’s how we get from The Great Gatsby to Fifty Shades of Grey.

In this and all subsequent sections there are many delightful anecdotes about famous authors’ work habits, reactions to success and failure, and peccadilloes (Did you know 5 of the first 6 American Nobel laureates were alcoholics? Feel like a drink? You might be a great writer…). And there’s a wonderful section on what Comfort calls, to my great delight “The MFA Mafia” where he takes down the Creative Writing Program system. Given what I’ve myself said about the evils of that system, to find a kindred soul who sees into the incestuous nature of said system and will discuss it openly is certainly a pleasure.

The last part of the book suggests (but not in a “how to” way, thank heaven) strategies for finding one’s way through the jungle of contemporary publishing and discusses with adequate but not annoying detail ways to approach agents, decide between traditional and self-publishing, and garner publicity for oneself and one’s work. Here equally enjoyable anecdotes relate some of the madcap PR stunts that writers of the last decade or so have tried to draw attention to their work. From the clearly life risking (swimming across the shark infested San Francisco Bay) to the weirdly misconceived (for a Valentine’s Day sale an author offered a sext to any buyer), what Comfort shows clearly is that much of what writers have to do today to gain the public’s notice is in no way related to writing.

Finally, in a brief “Chicken Soup” chapter , Comfort makes his most salient point about the whole mad world of writing and publishing:

When you embrace the creative journey itself, rather than some idealized, often illusory destination, you may have a chance at real success as an artist.

What David Comfort accomplishes in An Insider’s Guide to Publishing is to help readers (and especially writers) understand that while the publishing world may be a mess and getting messier, being a writer comes down to feeling as Somerset Maugham does:

4 Responses to An Insider’s Guide to Publishing, or why would anyone want to be a writer?